Groups sow doubt about COVID vaccine before one even exists

NEW YORK (AP) — A coronavirus vaccine is still months or years away, but groups that peddle misinformation about immunizations are already taking aim, potentially eroding confidence in what could...

WHO, allies lament Trump cut to US funding as virus rages

GENEVA (AP) — The head of the World Health Organization on Wednesday lamented the U.S. decision to halt funding for the U.N. agency, promising a review of its decisions while sidestepping...

Bill Gates says he is stepping down from Microsoft board

REDMOND, Wash. (AP) — Microsoft co-founder Bill Gates said Friday he is stepping down from the company's board to focus on philanthropy.

Gates was Microsoft's CEO until 2000 and since then...

FARGO, N.D. (AP) — No state money or resources were used for North Dakota Gov. Doug Burgum to attend the annual meeting of the Alfalfa Club and an exclusive party in Washington, D.C., over the...

PHOENIX (AP) — The discovery of thousands of files related to an Arizona elected official's adoption business on a government laptop cemented a panel's decision Friday to uphold his suspension and...

HELENA, Mont. (AP) — Five Jamaican citizens who were recruited to work at a Montana ski resort for the ultra-rich just north of Yellowstone National Park say they and more than 100 other Jamaicans...

PARIS (AP) — An organization that funds programs to fight AIDS, tuberculosis and malaria raised at least $13.92 billion for the next three years at an international conference, French President...

CONCORD, N.H. (AP) — There may be some bad blood between a former New Hampshire financial adviser and clients he's accused of defrauding via a fake charity he claimed involved singer Taylor...

NEW YORK (AP) — Bill Gates is taking his fight against climate change to the printed page.

Gates is working on “How to Avoid a Climate Disaster,” Doubleday announced Thursday. The Microsoft...

‘You are failing us’: Plans, frustration at UN climate talks

UNITED NATIONS (AP) — Scolded for doing little, leader after leader promised the United Nations on Monday to do more to prevent a warming world from reaching even more dangerous levels.

Go ahead, dive inside the mind of Bill Gates. But strap in.

NEW YORK (AP) — There are some things about Bill Gates that are unremarkable. His favorite food: hamburgers. His favorite animal: the dog. But a few minutes into a new TV series on Gates reveals a...

Experts say adapting to climate change can pay off manifold

BERLIN (AP) — A group of leaders from business, politics and science have called for a massive investment in adapting to climate change over the next decade, arguing it would reap significant...

Experts say adapting to climate change can pay off manifold

BERLIN (AP) — A group of leaders from business, politics and science called Monday for a massive investment in adapting to climate change over the next decade, arguing it would reap significant...

PROVIDENCE, R.I. (AP) — The Latest on how universities are dealing with past donations from Jeffrey Epstein (all times local):

WASHINGTON (AP) — Ken McNamee has an upfront view of the river of wealth cascading through Seattle these days.

A private chef, McNamee prospects for clients at the tony country club where he...

WASHINGTON (AP) — Ken McNamee has an upfront view of the river of wealth cascading through Seattle these days.

A private chef, McNamee prospects for clients at the tony country club where he...

Famous tech YouTuber has side gig as Ultimate Frisbee pro

From complex portraits of America's most famous celebrated personalities to quirky compositions of life being lived to...

The Maricopa County Board of Supervisors is looking to get ahead of...

HELENA, Mont. (AP) — Montana officials won't pull the liquor licenses of an ultra-exclusive ski resort that counts Bill Gates and Justin Timberlake among its members as part of a $370,000...

A California company says its experimental blood test was able to detect many types of cancer at an early stage and gave very few false alarms in a study that included people with and without the...

MacKenzie Bezos pledges half her fortune to charity

NEW YORK (AP) — MacKenzie Bezos, who finalized her divorce from Amazon founder and CEO Jeff Bezos earlier this year, is pledging to give away half her fortune to charity.

Buffett says trade war with China would be bad for world

OMAHA, Neb. (AP) — Investor Warren Buffett says if the U.S. has a full-blown trade war with China, it will be bad for the entire world.

The Latest: Buffett says trade war would be bad for world

OMAHA, Neb. (AP) — The Latest on investor Warren Buffett's comments on a variety of topics (all times local):

HELENA, Mont. (AP) — Members like Bill Gates and Justin Timberlake might find it difficult to get a drink the next time they go skiing at the exclusive Yellowstone Club if state regulators follow...

Beyond Meat fattens up as shares more than double in IPO

Investors have a big appetite for fake meat.

The shares of Beyond Meat, the purveyor of plant-based burgers and sausages, more than doubled Thursday in its Nasdaq debut. It's the first...

SEATTLE (AP) — Looking back at her time as an early Microsoft employee, Melinda Gates said the brash culture at the famously tough, revolutionary tech company made her want to quit, but that she...

DALLAS (AP) — The George W. Bush Presidential Center is honoring Bill and Melinda Gates with its annual award for those who work to improve the lives of others.

Is that soy in your Whopper? Plant-based meat sales rising

From soy-based sliders to ground lentil sausages, plant-based meat substitutes are surging in popularity. And carnivores — not vegans or vegetarians — are among the biggest...

NEW YORK (AP) — Did you hear what happened when Bill Gates walked into a bar? Everybody there immediately became millionaires — on average.

KIRKLAND, Wash. (AP) — Bill and Melinda Gates are pushing back against a new wave of criticism about whether billionaire philanthropy is a force for good.

HELENA, Mont. (AP) — A state lawmaker wants to make sure meat products produced from a cultured cell can't be labeled the same as steaks, burger and other items that come from livestock and poultry.

With poo on a pedestal, Bill Gates talks toilet technology

BEIJING (AP) — Placing a jar of feces on a pedestal next to him, billionaire philanthropist Bill Gates made a plea Tuesday for the safe disposal of human waste as he kicked off a "Reinvented Toilet" Expo in China.

"You might guess what's in this beaker — and you'd be right. Human feces," the former CEO of software giant Microsoft said. "This small amount of feces could contain as many as 200 trillion rotavirus cells, 20 billion Shigella bacteria, and 100,000 parasitic worm eggs."

Today in History for October 28th 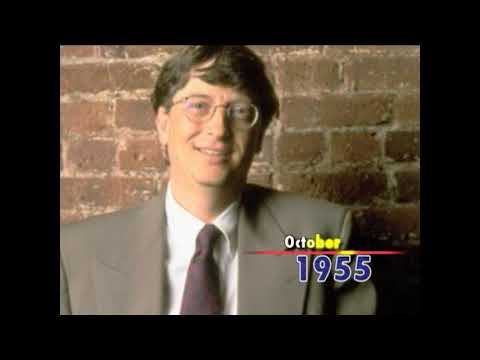 SEATTLE (AP) — Microsoft co-founder Bill Gates has given $1 million to a November ballot measure in Washington state that would charge a fee on carbon emissions from fossil fuels.

THE HAGUE, Netherlands (AP) — Former United Nations Secretary-General Ban Ki-moon appealed for a sense of urgency Tuesday as he launched a new commission that aims to accelerate and expand ways the world can prepare for climate change.

"Without urgent adaptation action, we risk undermining food, energy and water security for decades to come," Ban told guests as the Global Commission on Adaptation got underway in The Hague.

SEATTLE (AP) — Paul G. Allen, who co-founded Microsoft with his childhood friend Bill Gates before becoming a billionaire philanthropist, technology investor and owner of several professional sports teams, has died. He was 65.

He died Monday in Seattle, according to his company Vulcan Inc. Earlier this month Allen announced that the non-Hodgkin's lymphoma that he was treated for in 2009 had returned and he planned to fight it aggressively.

SEATTLE (AP) — Microsoft co-founder Bill Gates has endorsed a November ballot measure in Washington state that would charge a fee on carbon emissions from fossil fuels.

Gates wrote in a LinkedIn post Tuesday that he will contribute to the Yes on 1631 campaign and vote for it, saying "climate change may be the toughest problem humanity has ever faced."

The Bill and Melinda Gates Foundation as the world's largest philanthropy issued its latest "Goalkeepers" report on Tuesday, urging for more comparable student assessment data worldwide and help getting girls through their schooling.

Amazon is 2nd US company to reach $1 trillion market value

The milestone is another sign of Amazon's swift rise from an online bookseller to a behemoth that sells toilet paper, TVs and just about anything. In its two decades, Amazon has expanded far beyond online shopping and into health care, advertising and cloud computing.

The Bill and Melinda Gates Foundation is now funding groups working directly with clusters of public schools in some of the most impoverished regions of the country. Many of those third-party groups already had relationships with the world's largest philanthropy, and some of the grants went straight to a school district and charter schools organization.

SEATTLE (AP) — Dollar for dollar, the beleaguered movement to bring charter schools to Washington state has had no bigger champion than billionaire Bill Gates.

Secretary-General Antonio Guterres said at a news conference Thursday that he sees the United Nations "as a unique platform for dialogue in our digital age" and the panel as an expert group to make proposals to strengthen international cooperation.