Gaultier bids the runway adieu on final day of couture

PARIS (AP) — John Galliano put on a tongue-in-cheek show for Maison Margiela on the final day of Paris Fashion Week, as Jean Paul Gaultier bid adieu to the Paris couture runway with a fashion show...

Chanel delves into founder’s orphanage past in couture show

PARIS (AP) — A humble stone fountain, overgrown shrubs and flowers, and white sheets drying on a line met Pharrell Williams and other curious guests at the Chanel show inside the Grand...

PARIS (AP) — Guests crammed into Dior's annex in Paris' Place de la Condorde on Friday amid chaos before the show. Some guests had to jump out of the way to avoid being hit as cars came to unload...

Model became Dior muse by knocking on his door

LONDON (AP) — Before there were supermodels, there were "mannequins" — living, breathing women who played an active role in designing haute couture by standing very, very still. Designers and...

Dion, Paltrow mingle with the organic at Valentino couture

PARIS (AP) — Chanel's new chief Virginie Viard merged the worlds of two of its most famous couturiers, those of Gabrielle "Coco" Chanel and Karl Lagerfeld, for a cerebral couture show in Paris set...

PARIS (AP) — Dior went back to the essential architecture of dressmaking, and the late designer's penchant for black, for a brooding display Monday of archetypally couture gowns.

ROME (AP) — Glamorous jewelry and vintage fashion from the "La Dolce Vita" era are the star attractions of Bulgari's new exhibition in Rome.

Couture Council to honor Louboutin and his red-soled shoes

NEW YORK (AP) — From a tiny bottle of nail polish, a luxury fashion empire was born.

Designer Christian Louboutin says he was experimenting in his factory one day when he suddenly seized his...

CANNES, France (AP) — One of Julianne Moore's first thoughts after signing on to the Valentino-adorned short film "The Staggering Girl" was wardrobe.

A shimmering night in Dubai as Dior shows its haute couture

Lanvin makes a comeback at designer’s debut show in Paris

PARIS (AP) — After several years in the creative wilderness, Lanvin has made a comeback.

There was a palpable sense of relief — as well as praise — as noisy applause erupted at the end of...

LONDON (AP) — After the smashing success of its Alexander McQueen show, London's V&A Museum is looking to draw big crowds with another major fashion exhibition — this time focusing on Christian Dior.

Billed as the largest and most comprehensive museum display ever staged in Britain on the revered French fashion house, the V&A exhibit traces the influence of Dior over seven decades and showcases dozens of spectacular couture gowns. 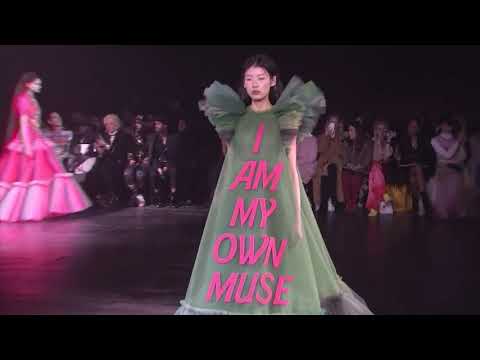 PARIS (AP) — Valentino took drama to its height at its Wednesday spring couture collection in Paris, where Celine Dion wept theatrically as a solemn Naomi Campbell swept past to close the house's show in a see-through black organza gown.

The VIP crowd that was surrounded by multicolored perfumed flowers whooped during a standing ovation as snow fell outside.

Here are some highlights of Wednesday's spring-summer 2019 couture collections: 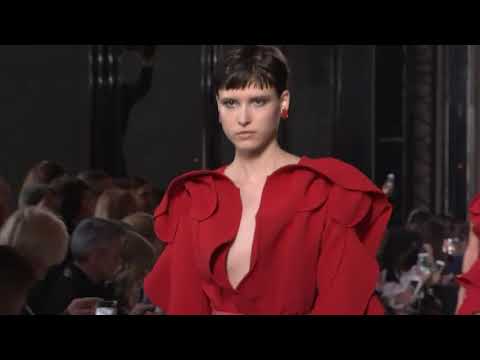 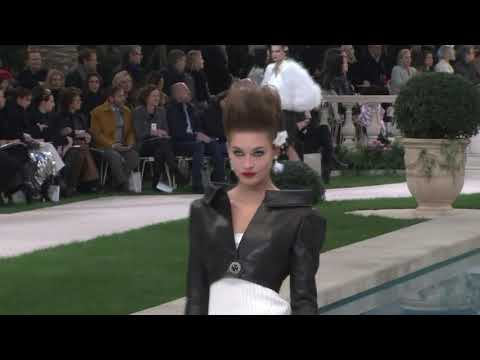 Givenchy flies high as Lagerfeld is absent at Chanel couture

PARIS (AP) — It's snowing in Paris, but not at Chanel, which showcased 18th-century-inspired couture that frothed inside a sunlit Italian villa.

For once, Karl Lagerfeld didn't take his usual bow — the house said because the octogenarian designer was fatigued.

Some highlights of the spring-summer 2019 couture collections on Tuesday, including how Clare Waight Keller proved she's a rare creative force with a sublime display at Givenchy:

Lagerfeld does not appear at Chanel show due to being tired

PARIS (AP) — Chanel's octogenarian designer Karl Lagerfeld, who has looked increasingly frail in recent seasons, did not come out to take a bow at the house's couture show in Paris, something the company attributed to him being tired.

It is the first time in recent memory that Lagerfeld, who has designed for the house since 1983, has not come out to receive applause at the end of one of his shows. 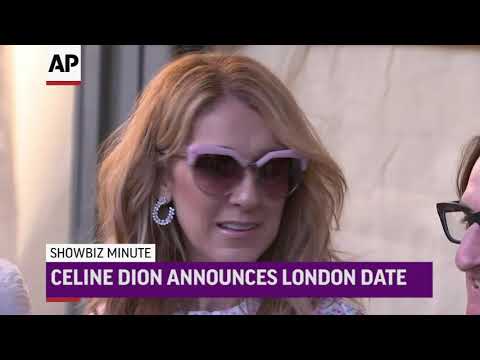 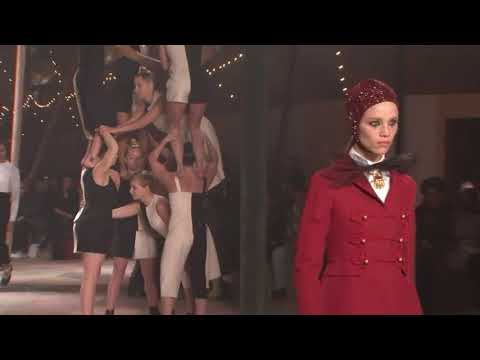 Inside a big top, Dior puts on circus-themed couture

PARIS (AP) — Dior drew inspiration from the top of the big top for a playful couture show held Monday in Paris, where models inside a circus-style tent walked through a human arch made of moving acrobats.

The theme seemed to well serve designer Maria Grazia Chiuri, who has struggled to fly in recent seasons.

The acrobatics also dovetailed with some of the recent film roles of Dior's VIP guest, British actress Felicity Jones, who explained all to The Associated Press.

Dior pulls the stars in conveyor-belt menswear show in Paris

PARIS (AP) — The black box construction branded "DIOR" was so big it obscured the view of the Eiffel Tower.

The sheer scale of menswear designer Kim Jones' pop-up venue of 2,840 square meters (30,570 square feet) could only mean one thing: he was competing for show of the season on Friday at Paris Fashion Week.

Dern spoke about how, as a mother of a budding model, she is taking a particular interest in the fashion industry.

Here are some highlights of the fall-winter 2019-20 shows.

PARIS (AP) — Parisian couturier Jean Paul Gaultier has become the latest fashion designer to shun the use of fur in his designs.

In a Canal+ interview that was aired over the weekend, Gaultier announced he would go fur-free "to get to a side of creativity that will not hurt, since the way animals are killed is absolutely deplorable."

PARIS (AP) — Where Hedi Slimane goes, the buzz is sure to follow.

The love-him-or-hate-him designer, credited with starting the global skinny menswear style via Dior Homme and later revamping Saint Laurent, returned at long last to the Paris Fashion Week calendar to unveil his debut at Celine Friday.

The reception was muted among critics who viewed it as deja vu from Slimane's Saint Laurent days.

SAN FRANCISCO (AP) — The head covering is among the most identifiable elements of Muslim women's dress and most likely to be portrayed as drab and restrictive to the Western eye.

But a new exhibition in San Francisco shows that the covering used by some Muslim women can be a bright yellow head wrap or a loose drape of rose; a black silk and lace scarf by Dolce & Gabbana; or a hood attached to a knee-length dress.

Narciso Rodriguez: A year of accolades - and family time

NEW YORK (AP) — Designer Narciso Rodriguez is good at a lot of things — some would say masterful, especially when it comes to making striking, unfussy clothes that women feel great in.

One thing he's not so good at? Getting through an acceptance speech without choking up.

Even rarer is the whooping and screaming that echoed around the gilded salons of the Hotel Salomon de Rothschild as Pierpaolo Piccioli took his bow following Valentino's collection Wednesday evening.

Mika, Valentino Garavani, Natalia Vodianova and Tracee Ellis Ross all got to their feet as the rousing operatic voice of Maria Callas played out the sumptuous creations from what was the week's strongest collection.

PARIS (AP) — Paris — the City of Light, lovelocks and the Seine River— was the backdrop Tuesday in Chanel's sublime couture collection that showed designer Karl Lagerfeld is still at the top of his game at 84.

Penelope Cruz, Pharrell Williams and Lily Allen applauded after the cinematic runway display in which the French fashion house painstakingly recreated a Parisian cityscape — all inside the nave of the Grand Palais.

Lagerfeld streets ahead for Chanel

PARIS (AP) — Guests including Katie Holmes and Kate Bosworth were taken deep inside the inner workings of Christian Dior for the French brand's nostalgic couture display that celebrated the artistry of the atelier.

Hundreds of retro busts and mannequins in unfinished-looking white gowns flanked the runway walls — from floor to ceiling — inside Paris' Rodin Museum as designs showcased the pared-down finesse of age-old couture.

Here are some highlights of the fall-winter collections shown Monday.

To the wispy singing of Givenchy's muse Audrey Hepburn, the opulent draping of the late couturier was rediscovered in Keller's dramatic designs, embellished with paillettes and feathers.

MILAN (AP) — Not just trends, but also continuity, were in focus as Milan Fashion Week launched four days of menswear previews for next spring and summer on Friday.

Fashion Week opened with the news that the Italian investment fund FSI has invested 70 million euros ($81 million) in the family-run Missoni fashion house, an important signal that home-grown funds were willing to pony up cash to help iconic brands make the generational transition.

MILAN (AP) — Not just trends, but also continuity, were in focus as Milan Fashion Week launched four days of menswear previews for next spring and summer on Friday.

Fashion Week opened with the news that the Italian investment fund FSI has invested 70 million euros ($81 million) in the family-run Missoni fashion house, an important signal that home-grown funds were willing to pony up cash to help iconic brands make the generational transition.

NEW YORK (AP) — Divine designs floated up the red carpet at Monday's religion-themed Met Gala in shimmering golds, reds and fuchsia, in crowns and in crosses, and even a pair of giant wings.

One lesson of the night: If anyone can make a mitre modern, it's Rihanna. The Grammy-winning artist — never one to shy away from a grand entrance — arrived dripping in pearls and crystals in a Maison Margiela by John Galliano minidress, ornate robe and beaded papal headgear.

Amsale Aberra bridal show to include tribute to designer

By The Associated PressApril 6, 2018 GMT

NEW YORK (AP) — Bridal Fashion Week this time around will include a tribute to couture designer Amsale Aberra, who died of cancer just days before her scheduled show.

She died Sunday at Memorial Sloan Kettering Hospital of uterine cancer at age 64, surrounded by close friends and family. She is succeeded as design director of the company she founded by Margo Lafontaine, who was most recently the senior studio director of Vera Wang.

The house of Givenchy paid homage to its founder in a statement as "a major personality of the world of French haute couture and a gentleman who symbolized Parisian chic and elegance for more than half a century."

PARIS (AP) — Paris Fashion Week is continuing in the French capital. Themes from the natural world, to the Roaring Twenties to the era of Glam Rock have been channeled on Day 2 of the shows.

Here are some of the fall-winter 2018 highlights:

Russian Sergeenko handwrote a note addressed to "my n---s in Paris" alongside a smiley, to blogger Miroslava Duma — who posted a photo of the note online Monday.

Sergeenko said the reference was inspired by a Kanye West track with the same title.

PARIS (AP) — The traveling fashion press bid "ciao" to Milan and said "bonjour" to Paris on Wednesday as another week of menswear mania that will include 50 shows, endless parties and million-dollar deals got underway in the French capital.

Powerhouse Valentino unveiled its couture-infused fall-winter creations from designer Pierpaolo Piccioli on Day 1, which also featured collections by lesser-known houses such as Julien David and Facetasm.

Fashion highlights from the sea of black at Golden Globes

With sweetheart necklines and high slits, sheer lace and sparkly details, Hollywood women with men on their side turned the Golden Globes red carpet into a parade of fashion black in a protest with a clear message for sexual harassers: Time's Up.

PARIS (AP) — Tunisian-born designer Azzedine Alaia, a fashion iconoclast whose clingy styles helped define the 1980s and who dressed famous women from Hollywood to the White House, has died.

The French Haute Couture Federation announced Alaia's death on Saturday without providing details. Twitter tributes to his influence on fashion poured in from around the world.

NEW YORK (AP) — Twice a year, New York's Fashion Week crowds have crammed into the lobby of a Chelsea gallery, waiting patiently to descend a staircase and see what bizarre, fantastical, endlessly inventive universe Thom Browne has created for his womenswear show — an otherworldly experience akin to getting lost on the set of a Tim Burton film.