LOS ANGELES (AP) — "The Lion King" rode its circle of life into a second weekend atop the box office and "Once Upon A Time ... In Hollywood," while not quite doing fairytale numbers, gave director...

‘The Lion King’s’ original voice bows down to Beyonce

WILMINGTON, N.C. (AP) — Before she was the voice of reason at the heart of The CW's "One Tree Hill," Moira Kelly brought her comforting tone and reassuring demeanor to another beloved property —...

LOS ANGELES (AP) — If there was any doubt that the 2019 box office belonged to the Walt Disney Co., this weekend put an end to it. Not only did its photorealistic remake of "The Lion King" devour...

BEVERLY HILLS, Calif. (AP) — The pressure was on for young actors Shahadi Wright Joseph and JD McCrary when they got word that they'd been cast as the voices of young Nala and young Simba in "The...

LOS ANGELES (AP) — Disney's "The Lion King" has received no shortage of remakes and spinoffs in the years since its original 1994 release. Now, as the film reaches its silver anniversary, Disney...

Glover tweeted Wednesday that it'd be available to stream for...

PASADENA, Calif. (AP) — Coming off a big night at the Grammys, Donald Glover and his alter-ego Childish Gambino were nominated Wednesday for five NAACP Image Awards.

Where is Donald Glover? 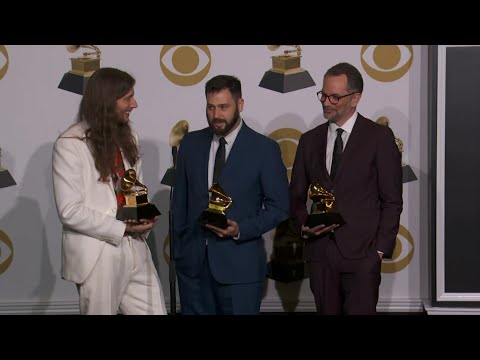 The Latest: Collaborators: No word from Glover on Grammys

LOS ANGELES (AP) — The Latest on the 61st annual Grammy Awards, which are being presented Sunday at the Staples Center in Los Angeles (all times local):

Even Childish Gambino's collaborators say they aren't sure of his whereabouts on Grammy night.

"This Is America" won record and song of the year honors, two of the three biggest categories.

‘RBG,’ ‘Won’t You Be My Neighbor?’ get directors guild noms

The DGA announced its five documentary selections Monday including "RBG," ''Won't You Be My Neighbor?" as well as the climbing documentary "Free Solo," ''Three Identical Strangers," about triplets who meet as adults, and "Hale County This Morning, This Evening."

Creepy character from ‘Atlanta’ appears in crowd at Emmys

LOS ANGELES (AP) — A creepy, whiteface character from the FX hit series "Atlanta" has been seated in the front row and taking selfies at the Emmy Awards.

LOS ANGELES (AP) — Scaling Emmy heights is tough in the era of so-called peak TV, with the volume of shows matched by lofty expectations from academy voters.

Good isn't enough for comedies and dramas, which need to resonate with the current political and social zeitgeist. Actors who also pull off the high-wire act of writing and directing collect more respect and trophies.

Emmy diversity gets a boost from Ricky Martin, Issa Rae

More than a third of the 101 acting nominations for the 70th Primetime Emmy Awards went to ethnic minorities, according to an analysis by The Associated Press. That's up from a quarter of the field last year, when Brown ("This Is Us") and Glover ("Atlanta") won top acting awards.

Lakeith Stanfield: An actor at home in the surreal

NEW YORK (AP) — The weirder it gets, the more Lakeith Stanfield looks right at home.

‘Solo: A Star Wars Story’ touches down in Cannes

CANNES, France (AP) — The Han Solo spinoff "Solo: A Star Wars Story" touched down Tuesday at the Cannes Film Festival, bringing its cast and a full-sized Chewbacca to the French Riviera extravaganza.

Director Ron Howard, wearing a hat that read "A long time ago in a galaxy far, far away," introduced his cast before the film's international premiere at Cannes.

WEST HOLLYWOOD, Calif. (AP) — Stevie Wonder discussed politics, talked pop culture and poked fun at his eyesight — sometimes all at once — between playing his hits at a tiny West Hollywood club in preparation for a series of shows.

"So Donald!" Wonder yelled at one point during a set at the Peppermint Club that ran into the early hours Thursday.

He made sure the crowd knew he didn't mean Donald Trump.

WASHINGTON (AP) — On the 50th anniversary of his assassination, Martin Luther King Jr.'s legacy was honored by hundreds in the nation's capital with a rally to end what participants said was systemic racism in the United States.

Bruno Mars has won the album of the year Grammy Award for "24K Magic," capping an epic night for the pop star.

The award is Mars' sixth win of the day. Mars acknowledged fellow nominees in the category, including Jay-Z, Lorde and Childish Gambino.

Mars says, "You guys are the reason I'm in the studio pulling my hair out."

For three African Americans, it was a night for the record books at the Emmys

The Latest: A bar _ for engraving _ is hit at Emmys ball

LOS ANGELES (AP) — The Latest on the Emmy Awards, presented Sunday in Los Angeles at the Microsoft Theater (all times local):

The main attraction at the Governors Ball after the Emmy Awards is the bar, but not the kind you're thinking about.

Sterling K. Brown and Alec Baldwin made a beeline for the trophy-engraving bar after the main show ended Sunday night.

By The Associated PressSeptember 18, 2017 GMT

List of winners of the annual Emmy Awards, announced Sunday by the Academy of Television Arts & Sciences.

Actor, Drama Series: Sterling K. Brown, "This is Us."