VIRUS DIARY: Isolation and patience on a quiet Gaza farm

BEIT LAHIYEH, Gaza Strip (AP) — I haven't spent more than a single night at my family's farm on the northern edge of Gaza since an Israeli airstrike killed my father there more than a decade ago....

GAZA CITY, Gaza Strip (AP) — Tens of thousands of Palestinians took to the streets in Gaza on Wednesday to mark the 55th anniversary of President Mahmoud Abbas’ Fatah movement.

JERUSALEM (AP) — The latest on the new escalation between Israel and Gaza (all times local):

Palestinians say a new Israeli airstrike has killed five people from a single...

A look at Israel’s targeted killings of militant leaders

JERUSALEM (AP) — The Israeli military says its aircraft have struck a Hamas naval base in the Gaza Strip after a rocket was fired into southern Israel from the territory.

BETHLEHEM, West Bank (AP) — Palestinians burned effigies of President Trump and marched a donkey pasted over with images of Gulf royals in the West Bank on Tuesday, as the U.S. prepares to open...

GAZA CITY, Gaza Strip (AP) — Palestinian singers are protesting Israel's hosting of the Eurovision song contest by performing on the rubble of a building destroyed in recent fighting in the Gaza...

The Latest: Hamas says it doesn’t want a new war with Israel

The leader of Hamas says his group is "not interested in a new war" with Israel, after two...

GAZA CITY, Gaza Strip (AP) — Palestinian militants on Saturday fired over 250 rockets into Israel, drawing dozens of retaliatory airstrikes on targets across the Gaza Strip in a round of heavy...

GAZA CITY, Gaza Strip (AP) — The Latest on developments in the Israel-Palestinian conflict: (all times local):

AP PHOTOS: A selection of pictures from the past week

Here's your look at highlights from the weekly AP photo report, a gallery featuring a mix of front-page photography, the odd image you might have missed and lasting moments our editors think you...

The Latest: Rockets fired from Gaza into Israel

The Israeli military says five rockets have been fired from the Gaza Strip...

JERUSALEM (AP) — The Israeli army on Tuesday bombed several targets in the Gaza Strip and bolstered its forces along the volatile frontier as a truce with the territory's Hamas rulers showed signs...

JERUSALEM (AP) — Israeli aircraft bombed targets across the Gaza Strip and Gaza militants fired rockets into Israel early Tuesday, the second day of cross-border fighting that erupted in the last...

Gaza's Hamas rulers say Egypt has brokered a cease-fire to end the latest round of fighting...

JERUSALEM (AP) — Cross-border fighting between Israel and Gaza's ruling Hamas group appeared to be winding down Friday, amid reports of an Egyptian-brokered truce and Israeli media saying a...

JERUSALEM (AP) — The Latest on Israel-Gaza (all times local):

The Israeli military has concluded that the militant Hamas group of Gaza fired two rockets toward the Israeli...

JERUSALEM (AP) — Israeli warplanes attacked militant targets in the southern Gaza Strip early Friday in response to a rare rocket attack on the Israeli city of Tel Aviv, as the sides appeared to...

By The Associated PressFebruary 8, 2019 GMT

Hassan Shalabi, 14, was shot in the chest at one protest site in southern Gaza Strip and Hamza Ishtiwi, 18, was killed at a protest in east Gaza City, the Health Ministry said. He was hit with a bullet in the neck.

The ministry added that 17 other protesters were wounded.

JERUSALEM (AP) — The Israeli military on Friday confirmed shooting a Palestinian car passenger dead in the West Bank, while a second Palestinian teenager was killed in a weekly border demonstration in the Gaza Strip.

AP PHOTOS: Editors’ picks for 2018 from the Middle East

CAIRO (AP) — In 2018, Associated Press photographers in the Middle East, Afghanistan and Pakistan captured searing images from relentless armed conflicts, but they also found moments of levity and offered a glimpse into daily life in a constantly changing region.

Tens of thousands rally in Gaza to mark Hamas anniversary

GAZA CITY, Gaza Strip (AP) — Tens of thousands of Palestinians have gathered in Gaza City for a rally marking the 31st anniversary of the militant Hamas group's establishment.

Gaza has been under an Israeli-Egyptian blockade since Hamas took power in 2007.

ASHKELON, Israel (AP) — Loren Amar was watching TV with her father around midnight when an air-raid siren warning of incoming rocket fire blared through their working-class neighborhood in southern Israel.

Their old apartment had no in-house shelter, so they huddled in the stairway just before a rocket from Gaza slammed into the building next-door, sending shrapnel and debris flying into their bedrooms — and the 29-year-old Amar to the hospital with shock symptoms. 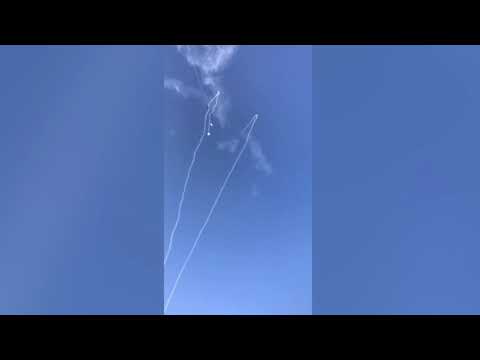 GAZA CITY, Gaza Strip (AP) — Palestinian militants bombarded Israel with dozens of rockets and mortar shells Monday, while Israeli warplanes struck targets throughout the Gaza Strip in what appeared to be the most intense exchange of fire since a 2014 war.

Hamas gets funds from Qatar to pay civil servants’ salaries

GAZA CITY, Gaza Strip (AP) — Gaza's Hamas rulers lauded on Friday what they described as a gain of their weekly protests along Gaza-Israel perimeter fence, which have often turned deadly, after receiving $15 million from Qatar to help pay the salaries of the territory's civil servants.

JERUSALEM (AP) — The Israeli military shelled Hamas targets in the Gaza Strip on Wednesday, killing three militants, after its troops on the border came under fire.

The army issued a statement saying it targeted Hamas military positions in the territory after a Palestinian sniper fired on Israeli soldiers "under the cover of 20 children that were sent towards the border fence as decoy." It military said an Israeli officer was moderately wounded.

JERUSALEM (AP) — The Israeli military lifted its restrictions along the Gaza border Sunday, indicating it had accepted an Egypt-mediated cease-fire that ended a 24-hour round of fighting with Hamas militants that had threatened to devolve into all-out war.

JERUSALEM (AP) — The Israeli military carried out its largest airstrike campaign in Gaza since the 2014 war Saturday as Hamas militants fired dozens of rockets into Israel throughout the day, threatening to trigger an all-out war after weeks of growing tensions along the volatile border.

Two Palestinian teenagers were killed in an airstrike in Gaza City, while three Israelis were wounded from a rocket that landed on a residential home.

The Latest: Hamas says it agrees to ceasefire in Gaza

JERUSALEM (AP) — The Latest on the Israel-Palestinian conflict (all times local):

Hamas and Islamic Jihad militants in Gaza have announced that they have agreed to a cease-fire with Israel.

The groups say Egyptian mediation efforts have succeeded in brokering a ceasefire ending an intense daylong round of cross border violence.

However, it is unclear whether it will hold as warning sirens were heard in southern Israel early Sunday indicating incoming rocket fire once again.

JERUSALEM (AP) — Palestinian militants bombarded southern Israel with dozens of rockets and mortar shells Tuesday, while Israeli warplanes struck targets throughout the Gaza Strip in the largest flare-up of violence between the sides since a 2014 war.

The Israeli military said most of the projectiles were intercepted, but three soldiers were wounded, raising the chances of further Israeli retaliation. One mortar shell landed near a kindergarten shortly before it opened.

JERUSALEM (AP) — The Latest on the violence along the Israel-Gaza border (all times local):

The United States has called for an emergency meeting of the U.N. Security Council after Gaza militants fired dozens of rockets and mortar shells into southern Israeli, wounding three soldiers.

The U.S. Mission to the United Nations said it expects the meeting to take place Wednesday afternoon.

GAZA CITY, Gaza Strip (AP) — The health ministry in Gaza says a 19-year-old Palestinian has died of wounds sustained during confrontations between Palestinian protesters and Israeli troops along Gaza's border.

Anas Abu Asr was wounded near Gaza City last Friday, the fifth of weekly protests led by the ruling militant Hamas group. The ministry said he died Thursday, without elaborating.

The Palestinian U.N. ambassador is challenging Israel to agree to an independent commission to investigate events in Gaza and determine "who are the criminals, who are violating international law and to hold them responsible for these crimes."

The protests, largely led by Gaza's Hamas rulers, began March 30. Organizers said they'll gradually move the camps toward the fence until May 15, but made conflicting comments about a possible breach.

GAZA CITY, Gaza Strip (AP) — In recent weeks, Gaza residents have been jolted awake in the dead of night to a raucous mixture of Quranic phrases, Islamic supplications and prayers delivered by loudspeakers to their doorsteps.

The "Grand Fajr Campaign" is the work of fervent religious activists, many affiliated with the ruling Hamas militant movement, seeking to spread the message of Islam in an already deeply conservative society. But not everyone is ready to listen.

More Than 40 Palestinians Injured in Clashes

GAZA CITY, Gaza Strip (AP) — Hamas marked the 30th anniversary of its founding with a mass rally of many thousands of supporters Thursday, staging a show of strength at a low point in the Islamic militant group's history.

AP Explains: Why Gaza is experiencing a new power crisis

GAZA CITY, Gaza Strip (AP) — The Gaza Strip is in the midst of an electricity shortage that has left residents with just a few hours of power a day, turning many aspects of everyday life in the Hamas-ruled territory upside down and raising concerns about a humanitarian crisis.

Here's a look at the Gaza power crisis:

WHAT CAUSED THE CRISIS?