Republican U.S. Rep. Dan Newhouse says he will introduce a bill to give...

Most overrated? Mattis laughs off Trump barb at charity gala

Speaking at a New York charity event Thursday the day after...

Pentagon to probe if Shanahan used office to help Boeing

WASHINGTON (AP) — The Pentagon's inspector general has formally opened an investigation into a watchdog group's allegations that acting Defense Secretary Patrick Shanahan has used his office to...

Editorials from around Ohio

By The Associated PressDecember 24, 2018 GMT

Excerpts of recent editorials of statewide and national interest from Ohio's newspapers:

MOSCOW (AP) — Russia wants to sit down with Pentagon officials for "open and specific" talks on alleged violations of the Intermediate-Range Nuclear Forces treaty, the Russian Defense Ministry said Saturday.

The U.S. claims Russia is violating the INF treaty, and on Dec. 4 issued an ultimatum that Moscow come into compliance with the accord in 60 days, or else Washington will withdraw. Russia denies it's in breach of the treaty.

The Latest: Senators move to act against Saudi Arabia

WASHINGTON (AP) — The Latest on the U.S. response to the killing of Saudi journalist Jamal Khashoggi (all times local):

Senators are sending a strong signal that they want to punish Saudi Arabia for its role in the murder of journalist Jamal Khashoggi, voting to move forward with legislation that would end U.S. involvement with a Saudi-led war in Yemen.

WASHINGTON (AP) — Defying President Donald Trump, senators sent a strong signal Wednesday that they want to punish Saudi Arabia for its role in the murder of journalist Jamal Khashoggi. By a bipartisan 63-37 vote, the Senate opted to move forward with legislation calling for an end to U.S. involvement in the Saudi-led war in Yemen.

NEW ORLEANS (AP) — A Marine Corps Reserve commander based in New Orleans has been nominated for promotion to major general.

MIAMI (AP) — Defense Secretary James Mattis said Monday that the U.S. military brings stability to most of Latin America through its operations run across the hemisphere by the Miami-based Southern Command.

Mattis spoke Monday at a ceremony appointing Navy Adm. Craig Faller as new leader of the command that oversees U.S. military operations in Latin America and the Caribbean. It is also responsible for security of the Panama Canal and the naval base at Guantanamo Bay, Cuba.

CHEYENNE, Wyo. (AP) — Three war-trophy bells seized by U.S. troops over a century ago got a send-off back to the Philippines on Wednesday by U.S. Defense Secretary James Mattis, who called the controversial decision to repatriate them an important gesture of friendship between the two countries.

Some veterans and officials in the U.S. oppose returning the Bells of Balangiga, calling them memorials to American war dead. But Filipinos revere the bells as symbols of national pride. 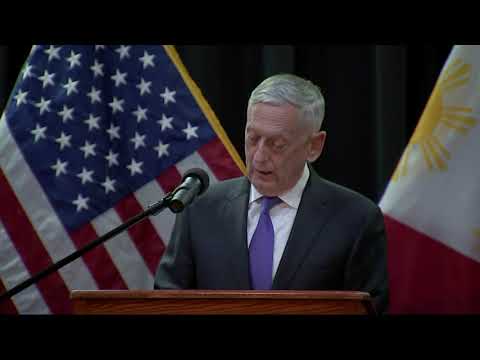 Mattis send-off as US war-booty bells return to Philippines

CHEYENNE, Wyo. (AP) — The U.S. defense secretary plans to take part in a ceremony in Wyoming marking the beginning of a process to return three disputed church bells to the Philippines.

The Defense Department says Defense Secretary James Mattis plans to travel Wednesday to F.E. Warren Air Force Base in Cheyenne. Two of the Bells of Balangiga are at the base, and the third is with the U.S. Army in South Korea.

KABUL, Afghanistan (AP) — Defense Secretary James Mattis made a surprise visit to Afghanistan's war-shattered capital on Friday, the U.S. command in Afghanistan said, just days after a suicide bomber killed 21 people in the city and wounded 90 others.

MANILA, Philippines (AP) — The Philippine president is opposing an offer by the U.S. defense chief and other top American officials to buy F-16 fighter jets, saying such an acquisition would be "utterly useless" because his country needs lighter combat aircraft to fight insurgents.

CHEYENNE, Wyo. (AP) — The United States should not return church bells seized as war trophies from the Philippines over a century ago, Wyoming's congressional delegation said Monday.

It's a position Wyoming officials have repeated often over the years amid reports the Bells of Balangiga were to be repatriated. This time, however, the U.S. Defense Department appears intent on following through.

US postpones high-level dialogue with India

NEW DELHI (AP) — The United States on Wednesday announced postponement of a high-level dialogue with India scheduled for next week in Washington, D.C., without assigning any reasons even as its ambassador to the United Nations met with top Indian leaders in New Delhi to step up ties in various fields.

Mattis also stressed preparedness and taking responsibility in Saturday's commencement address, saying the 191 graduates should "always know where your boots are" so they're ready when trouble looms.

SEOUL, South Korea (AP) — After being blindsided by President Donald Trump's decision to shelve major U.S. military exercises in South Korea, Seoul appears to be going along with it.

Turkish official says US and Turkish troops to patrol Manbij

ISTANBUL (AP) — Turkey's defense minister says Turkish and U.S. soldiers will patrol the key northern Syrian town of Manbij as part of a deal reached this week for the withdrawal of a Syrian Kurdish militia.

Speaking in Brussels after a NATO summit late Friday, Defense Minister Nurettin Canikli said he met his American counterpart James Mattis. "We had a very detailed, constructive and positive meeting on the Manbij roadmap," he said.

Mattis: US Aim in Syria is Still Defeating ISIS

National Security Council spokesman Michael Anton said Trump called the report "fake news" in a meeting with McMaster Thursday and informed McMaster "that he is doing a great job."

Top intel official: US must do more to stop Russian meddling

WASHINGTON (AP) — The U.S. response to Russian meddling and disinformation campaigns has not been strong enough to deter Moscow's activities, a top intelligence official said Tuesday.