Joe Biden is expanding his influence over the Democratic Party with a new fundraising deal and a leadership shuffle at the Democratic National Committee.

WESTERVILLE, Ohio (AP) — Former Secretary of State John Kerry and former California Gov. Arnold Schwarzenegger will be in Ohio next month and join with former Gov. John Kasich to talk about...

UN chief warns against ‘survival of the richest’ on climate

Bloomberg tells UN climate talks: You can count on the US

STORM LAKE, Iowa (AP) — Minutes after Joe Biden met Cathy Buxengard, he commandeered her cellphone to talk with her 99-year-old mother about her service as a World War II nurse and how worried she...

Caroline Kennedy to christen carrier named after her father

NEW HAMPTON, Iowa (AP) — Joe Biden sought to capitalize on President Donald Trump's icy reception from world leaders by portraying himself on Thursday as someone who is well versed in foreign...

SACRAMENTO, Calif. (AP) — Democratic presidential candidate Kamala Harris is laying off several dozen staff members and transferring others in an effort to salvage her prospects in the Iowa...

BOSTON (AP) — A business executive who touted is experiences as a foster child when he announced a primary challenge to Democratic Massachusetts U.S. Sen. Edward Markey in July has ended his...

Harris faces questions about whether Iowa focus is too late

WASHINGTON (AP) — Kamala Harris is refocusing on Iowa in hopes that momentum there will reinvigorate a presidential campaign that is so far falling short of expectations. But the California...

John Kerry got "Swift Boated" in 2004. For Hillary Clinton in 2016, it was her "damn emails." Remembering those failed Democratic presidential campaigns, Joe Biden is determined not to get...

Biden’s abortion shift tests the politics of his faith

WASHINGTON (AP) — It was one of the first stress tests of Joe Biden's presidential campaign: A sudden reversal of his decades-long support for restricting federal funding of abortions.

Biden’s abortion shift tests the politics of his faith

WASHINGTON (AP) — It was one of the first stress tests of Joe Biden's presidential campaign: A sudden reversal of his decades-long support for restricting federal funding of abortions.

WASHINGTON (AP) — President Donald Trump on Monday assailed the Obama administration for being hoodwinked by Iran, making his case with a frequently told and false story about the U.S. giving...

Sen. Markey faces 2 challengers; now some pushing for a 3rd

BOSTON (AP) — Some Massachusetts voters see Sen. Edward Markey as potentially vulnerable to a primary challenge, and one group is even trying to persuade U.S. Rep. Joe Kennedy to run for his...

Fried Oreos here: Iowa State Fair a must for 2020 hopefuls

DES MOINES, Iowa (AP) — Howard Dean took one bite of a deep-fried Oreo and dismissively pitched the rest into the garbage.

Q&A: Theron, Rogen on the comedy of politics, and vice versa

NEW YORK (AP) — The last time Seth Rogen made a movie set in the political world, it went a little rocky.

"The Interview," which Rogen starred in, co-directed and produced, prompted the ire...

WASHINGTON (AP) — A group of former U.S. national security officials is set to release a statement arguing there is no justification for President Donald Trump to use a national emergency...

WASHINGTON (AP) — Elizabeth Warren has named longtime adviser Roger Lau to manage her campaign for the Democratic presidential nomination in 2020.

The Massachusetts Democrat had previously tapped Lau to manage her 2018 re-election bid.

Warren, among several U.S. senators in a packed Democratic presidential primary, says Lau "believes in building a grassroots operation, and that's exactly what we'll do."

KABUL, Afghanistan (AP) — Afghanistan's President Ashraf Ghani and Chief Executive Abdullah Abdullah on Sunday registered to run for president later this year, setting up a rematch after a bitterly disputed 2014 vote led to a power-sharing agreement brokered by the United States.

JOHANNESBURG (AP) — The United States says it has re-established a "permanent diplomatic presence" in Somalia for the first time in 27 years.

The U.S. closed its Somalia embassy in January 1991 as the country collapsed into civil war, with the military airlifting out the ambassador and others.

JOHANNESBURG (AP) — The United States says it has re-established a "permanent diplomatic presence" in Somalia for the first time in 27 years.

The State Department on Tuesday says "this historic event reflects Somalia's progress in recent years and is another step forward in formalizing U.S. diplomatic engagement in Mogadishu."

WASHINGTON (AP) — Lawmakers trying to oust Nancy Pelosi started rallying behind a possible contender Thursday, but the House Democratic leader gained key endorsements and said she has "overwhelming support" to become the next speaker.

Pelosi picked up backing from Rep. John Lewis, D-Ga., the civil rights leader, while a who's-who of Democrats — including former Vice President Al Gore and former Secretary of State John Kerry — advocated on her behalf.

John Kerry: Only way to restore democracy is to vote

WASHINGTON (AP) — Secretary of State Mike Pompeo has unloaded on his Obama-era predecessor John Kerry for "actively undermining" U.S. policy on Iran by meeting several times recently with the Iranian foreign minister, who was his main interlocutor in the Iran nuclear deal negotiations.

Former Secretary of State John Kerry has responded to President Donald Trump's criticism of his meeting with the Iranian foreign minister by telling the commander in chief he should instead focus on the special counsel's investigation.

WASHINGTON (AP) — Secretary of State Mike Pompeo unloaded Friday on his Obama-era predecessor John Kerry for "actively undermining" U.S. policy on Iran by meeting several times recently with the Iranian foreign minister, who was his main interlocutor in the Iran nuclear deal negotiations. 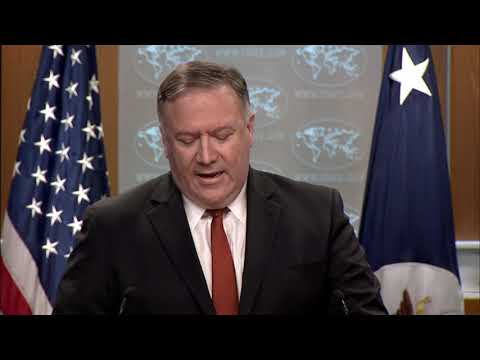 WASHINGTON (AP) — President Donald Trump is taking a swipe at John Kerry, after the former secretary of state did not rule out a 2020 Democratic presidential bid.

Trump tweeted Monday: "I see that John Kerry, the father of the now terminated Iran deal, is thinking of running for President. I should only be so lucky - although the field that is currently assembling looks really good - FOR ME!"

Pressley trying to be 1st black woman from Mass. in Congress

BOSTON (AP) — Ayanna Pressley is attempting one of toughest political feats in Massachusetts — persuading Democratic voters to reject a long-time incumbent during a primary.

In a statement Tuesday, Huntsman said she was excited to return to her professional roots at ABC, where she began her journalism career.

She'll be working as a co-host with "The View" moderator Whoopi Goldberg and co-hosts including Meghan McCain, daughter of the late Sen. John McCain.

HANOI, Vietnam (AP) — Sen. John McCain's Vietnamese jailer said he respected his former inmate and felt sad about his death, as others in Vietnam paid their respects to the former U.S. Navy pilot who became a prisoner of war and later was instrumental in bringing the wartime foes together.

McCain's Skyhawk dive bomber was shot down over Hanoi in 1967 and he was taken prisoner and held in the infamous "Hanoi Hilton" prison for more than five years.

Sen. Elizabeth Warren said she and McCain disagreed on many things, but she counted it a blessing to have served with him in the Senate. Sen. Edward Markey called McCain a hero who stood up against torture and put country ahead of party.

CHICAGO (AP) — The Democratic Party has begun conversations with television networks about a series of presidential primary debates in 2019, a top party official has told The Associated Press.