PHOENIX (AP) — Three Arizona lawmakers are among the nearly 100 members of Congress named to a bipartisan group advising President Donald Trump on recovering from the coronavirus...

WASHINGTON (AP) — Kentucky Sen. Rand Paul says he was tested a week ago for the novel coronavirus, but continued working at the Capitol because he had no symptoms of the illness and believed it...

Democratic Arizona Sen. Kyrsten Sinema's decision to vote to convict President Donald Trump on articles of impeachment was one she kept to herself until the last minute.

Note-passing and power: Moderates team up at Trump trial

WASHINGTON (AP) — Republican seatmates Susan Collins and Lisa Murkowski on Thursday passed a piece of paper back and forth, nodded — and then sent the note on an unusual journey across the Senate...

WASHINGTON (AP) — As the Senate impeachment trial grinds toward a climax, it remains unclear how three Democrats will vote on whether to toss President Donald Trump from office.

Senators want to make it easier for asylum seekers to work

PORTLAND, Maine (AP) — Senators from Maine and Arizona want to make it easier for asylum seekers to get jobs shortly after entering the country.

US Senate bill would ban mining claims around Grand Canyon

Pence will be in Phoenix on Wednesday to celebrate Republican Sen. Martha McSally at a...

PHOENIX (AP) — A push by liberals for the Arizona Democratic Party to censure Sen. Kyrsten Sinema will be put off until next year.

TUCSON, Ariz. (AP) — Members of the state's congressional delegation are citing deficiencies in mail service to southern Arizona as they ask that the U.S. Postal Service be required to carefully...

PHOENIX (AP) — The University of Arizona would get ownership of a ranch that's now federal property under a proposed land swap intended to support the university's planned new veterinary...

Businessman in no rush to make decision on GOP Senate run

PHOENIX (AP) — A conservative business owner says he's starting a "listening tour" around Arizona as he considers whether to challenge U.S. Sen. Martha McSally in the Republican...

PHOENIX (AP) — The U.S. Senate has confirmed President Donald Trump's appointment of a lawyer who formerly was Gov. Doug Ducey's top staff attorney to be a U.S. District Court judge for...

The Arizona Democrat said Tuesday that "spending energy on the...

PHOENIX (AP) — President Donald Trump is formally backing Arizona Republican Sen. Martha McSally in one of the most hotly contested Senate races of the 2020 election.

PHOENIX (AP) — Members of Arizona's congressional delegation are asking the U.S. Army to use a National Guard facility in Pinal County to meet a growing demand for training pilots who will fly...

PHOENIX (AP) — The Latest on speeches to the Arizona Chamber of Commerce by Arizona's two U.S. senators (all times local):

PHOENIX (AP) — Democrat Mark Kelly has more than $3 million in the bank for his U.S. Senate campaign, about the $1 million more than Republican incumbent Martha McSally.

Arizona senators urge US to keep officers at border ports

SCOTTSDALE, Ariz. (AP) — Vice President Mike Pence called on the Senate Tuesday not to reject President Donald Trump's emergency declaration freeing up money to build a wall on the southern...

WASHINGTON (AP) — President Donald Trump's nominee for attorney general could be in office by the end of the week after senators voted to move forward on his nomination.

The Senate voted 55-44 on Tuesday to proceed with William Barr's nomination, setting up a confirmation vote in the next day or two. Three Democrats voted with Republicans — Sens. Doug Jones of Alabama, Joe Manchin of West Virginia and Kyrsten Sinema of Arizona.

PHOENIX (AP) — Arizona's governor on Tuesday appointed U.S. Rep. Martha McSally to replace Sen. Jon Kyl in the seat that belonged to the late John McCain, sending the GOP congresswoman back to Washington just a month after she lost a tight race for the state's other spot in the Senate.

TUCSON, Ariz. (AP) — Rep. Martha McSally has given her final speech to the U.S. House of Representatives as she prepares to leave office early next year.

The two-term Republican lawmaker told fellow House members Wednesday that Americans have deeply different views on how to solve the nation's challenges, but lawmakers need to set an example, disagree without being disagreeable and find common ground where they can govern.

PHOENIX (AP) — Arizona Gov. Doug Ducey and other top state officials on Monday certified the results of November's general election that gave the Republican governor a second term but also elected the state's first Democratic U.S. Senator since the mid-1990s.

Analysts: Democrats made gains, but Arizona isn’t purple yet

PHOENIX (AP) — The vote wasn't as predictably Republican this time around, but don't call Arizona purple yet.

That's the view of political analysts who say Democratic gains in this month's election need to be cemented in future contests to show this year wasn't a one-off.

"It was a big year for Democrats in Arizona, but that does not make it a purple state," said Tempe pollster Mike O'Neil, who hosts a radio show focusing on state politics. "We really won't know until 2020."

WASHINGTON (AP) — Chad Griffin, the influential LGBTQ activist who helped turn the Human Rights Campaign into a powerful political force, announced Thursday that he is stepping down as the organization's president.

Griffin's announcement follows a midterm election in which the group invested heavily in Democratic campaigns. The capstone for the organization came this week, when Rep. Kyrsten Sinema, D-Ariz., won a close Senate race, becoming the first openly bisexual person elected to the Senate.

Rep. Kyrsten Sinema won the Arizona Senate seat being vacated by Republican Jeff Flake to become the first woman to win a U.S. Senate seat in the state. The race against Republican Rep. Martha McSally was tight enough that a winner wasn't decided until Monday, after a slow count of mail-in ballots gave her an insurmountable lead.

More races go to Democrats, including Senate seat in Ariz.

NEW YORK (AP) — No, it wasn't a blue wave. But a week after the voting, Democrats are riding higher than they thought on election night.

As vote counting presses on in several states, the Democrats have steadily chalked up victories across the country, firming up their grip on the U.S. House and statehouses. The slow roll of wins has given the party plenty to celebrate. 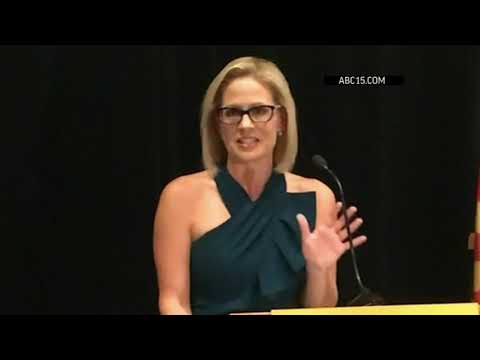 PHOENIX (AP) — Democrat Kyrsten Sinema won Arizona's open U.S. Senate seat Monday in a race that was among the most closely watched in the nation, beating Republican Rep. Martha McSally in the battle to replace GOP Sen. Jeff Flake.

PHOENIX (AP) — The Latest on the election for U.S. Senate in Arizona (all times local):

Democrat Kyrsten Sinema is citing a Republican as her example as she prepares to become Arizona's first female senator.

Sinema declared victory in her race against Republican Martha McSally Monday night. There was a delay because the contest was close and Arizona takes a long time to count votes.

McSally called Sinema to concede the race. Sinema opened up a narrow but insurmountable lead.

Picking up another seat, Dems ride high on slow roll of wins

NEW YORK (AP) — No, it wasn't a blue wave. But a week after the voting, Democrats are riding higher than they thought on election night.

As vote counting presses on in several states, the Democrats have steadily chalked up victories across the country, firming up their grip on the U.S. House of Representatives and statehouses. The slow roll of wins has given the party plenty to celebrate.

Sinema continues to pull away in slow Arizona Senate count

Sinema now leads Republican Martha McSally by more than 30,000 votes. Sunday's totals included a batch from Maricopa County that Republicans hoped McSally could win. Instead, it added 2,200 to Sinema's lead.

Sinema continues to inch ahead in slow Arizona vote count

Democrat Kyrsten Sinema is continuing to inch ahead in the slow-motion finish to Arizona's U.S. Senate race.

On Saturday night, she remained a little more than a percentage point ahead of Republican Martha McSally. She gained 4,000 votes from a batch of ballots tallied in Maricopa County as well as a few thousand from elsewhere in the state.

Woods told radio station KTAR on Friday that he changed his registration because of frustration with President Donald Trump and the Republican Party.

PHOENIX (AP) — The Latest on the Senate election in Arizona (all times local):

Democrat Kyrsten Sinema has extended her lead in Arizona's nail-biter of a U.S. Senate race.

A new batch of votes from the state's largest county gives her a lead of more than 20,000 votes out of 2 million counted. There are still more than 350,000 ballots statewide remaining to be tallied in the contest against Republican Rep. Martha McSally.

Nothing unusual about vote count in Arizona dragging on

Every election, it takes weeks for Arizona to count its ballots. But as the Democrat in the tight U.S. Senate race there jumped into the lead in the latest results some Republicans have raised baseless allegations of fraud.

PHOENIX (AP) — A judge on Thursday rejected Republican demands to immediately limit vote counts in the razor-close U.S. Senate race in Arizona and has set a hearing on the challenge affecting about 5,600 votes in the state's most populous county.

PHOENIX (AP) — The Latest on a lawsuit filed by Arizona Republicans seeking to block some ballots from being counted. (all times local):

Arizona's photo-finish Senate race is not over yet. But Democrat Kyrsten Sinema just took a step closer to the finish line.

Republican Rep. Martha McSally and Democratic Rep. Kyrsten Sinema were separated by a small fraction of the 1.7 million tabulated votes.

PHOENIX (AP) — Arizona is a political rarity this year, one of the few places where Democrats have any hope of flipping a Republican Senate seat.

In a year when the Senate map isn't favorable for Democrats, changing demographics could put the seat being vacated by Sen. Jeff Flake within reach.