The Latest: Rosendale wins GOP nomination for US House

Virtual debates this weekend for Montana’s US House race

GREAT FALLS, Mont. (AP) — Seven of the eight candidates running for Montana’s lone U.S. House seat are scheduled to participate in a virtual debate on Saturday.

HELENA, Mont. (AP) — The Green Party has qualified to have candidates on the 2020 ballot in Montana, the Secretary of State's office said Friday.

HELENA, Mont. (AP) — A third Republican said Monday that he will run for the party's nomination for Montana state auditor.

Scott Tuxbury is an insurance underwriter who has worked to bring...

Green Party: We’re not behind effort to gain ballot access

HELENA, Mont. (AP) — For the second consecutive election cycle, someone is paying out-of-state signature gatherers to qualify the Green Party for the Montana ballot. And, as in 2018, the Montana...

Lee Newspapers of Montana reports that the president’s son will...

HELENA, Mont. (AP) — Republican Steve Daines reported bringing in $1.2 million from donors and political committees over the last three months as he seeks a second term as Montana's junior U.S....

HELENA, Mont. (AP) — A Billings woman who has spent much of her career in the workers compensation insurance industry is seeking the Republican nomination for Montana State Auditor and Insurance...

HELENA, Mont. (AP) — U.S. Sen. Steve Daines of Montana says he collected over $1.3 million for his 2020 re-election campaign during the most recent fundraising period.

The addition of Democrat Matt Rains of Simms and Republican Timothy Alan Johnson of Corvallis...

State Rep. Shane Morigeau (Mor'-joh) of Missoula announced his candidacy in a video Sunday. He joins...

HELENA, Mont. (AP) — The three Montana companies that offer health insurance policies on the individual marketplace are proposing reduced rates in 2020, in part because of a bill passed by the...

HELENA, Mont. (AP) — Montana lawmakers did not have enough support to override four vetoes by Democratic Gov. Steve Bullock, including a strongly supported bill that sought to give health insurers...

Vice president to travel to Montana, Yellowstone next week

Republican U.S. Sen. Steve Daines, who is up for election next...

Dozens of Montana officials to see pay bump this summer

HELENA, Mont. (AP) — Seventy-one Montana elected officials will get pay raises this summer to match the average salaries of their counterparts in neighboring states.

A Montana House committee has advanced a nearly $10.3 billion budget to fund state...

HELENA, Mont. (AP) — Montana lawmakers are considering a bill aimed at reducing prescription drug prices for people who buy their health insurance through the marketplace, although companies that sell individual health insurance plans argued Friday it would actually hamper their efforts to negotiate favorable contracts for administration of their prescription benefits.

HELENA, Mont. (AP) — Montana lawmakers and the state insurance commissioner are targeting a generally hidden part of the health care system, with new regulations aimed at bringing down prescription drug costs. Companies in the drug supply chain, and the state's biggest health insurance company, are fighting back.

More than $70 million spent in Montana US Senate race

Including money spent in the June primary bumps the election's total price tag to about $73 million.

The policy approved Wednesday came followed a recent visit by President Donald Trump to campaign on behalf of Republican U.S. Senate candidate Matt Rosendale. The sheriff's department spent nearly $13,000 in providing security. The county sent a bill to Rosendale's campaign, but did not receive a response.

Tester wins by poaching Trump voters, holding his base

HELENA, Mont. (AP) — Democratic Sen. Jon Tester overcame President Donald Trump's personal interest in his defeat to win a third term by holding on to his base and poaching voters who gave Trump a landslide victory in Montana in 2016.

The president and his surrogates returned repeatedly to Montana, North Dakota, Missouri and Indiana this election season, pounding on Tester and other incumbent Democrats who opposed the nominations of Brett Kavanaugh and Neil Gorsuch.

The president repeatedly returned to Montana, North Dakota, Missouri and Indiana, where he pounded on Tester and other lawmakers who opposed his Supreme Court picks, Brett Kavanaugh and Neil Gorsuch. 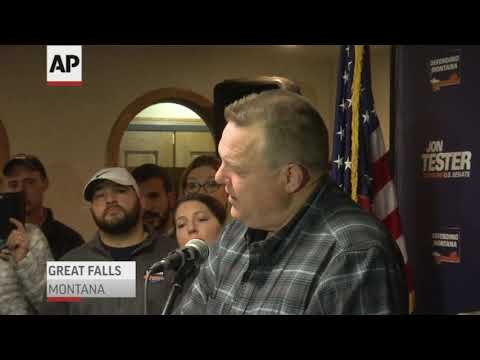 Voters casting midterm election ballots in Montana are divided over the state of the nation, according to a wide-ranging survey of the American electorate.

As voters cast ballots for U.S. Senate and members of Congress in Tuesday's elections, AP VoteCast found that 48 percent of Montana voters said the country is on the right track, compared with 49 percent who said the country is headed in the wrong direction.

The Latest: 3 Senate races remain too close to call

The race for U.S. Senate in Montana between Democratic incumbent Jon Tester and Republican Matt Rosendale is too close to call.

The Latest: Montana’s US Senate race too close to call

By The Associated PressNovember 7, 2018 GMT

The Latest on the general election in Montana (all times local):

Democratic incumbent Jon Tester and Republican Matt Rosendale are locked in a Montana U.S. Senate race that's too close to call with votes still being counted.

Election results were still coming in Tuesday night. Rosendale was following the returns with supporters in Helena, while Tester told his supporters to go home for the night.

By The Associated PressNovember 6, 2018 GMT

The outcome of Montana's hotly contested Senate race may come down to which side did a better job of motivating their supporters to show up on Election Day.

Pence told supporters at a Monday rally north of Kalispell to vote for Republican Senate candidate Matt Rosendale as a fiscal conservative who would "stand with the president every day."

Democratic Sen. Jon Tester is facing another stiff re-election challenge after President Donald Trump made an unprecedented four trips to Montana to stump for Republican challenger Matt Rosendale. Control of the Senate is potentially at stake.

The Latest: Trump says Democrats have a ‘wrecking ball’

President Donald Trump is sharing the stage at a Florida rally with the state's Republican candidates for the U.S. Senate and governor, at the same time taking swipes at their Democratic opponents.

Trump's appearance Saturday night in Pensacola, Florida, followed a rally earlier in the day in Montana, part of a multistate sprint by the president toward Tuesday's midterm elections.

BILLINGS, Mont. (AP) — With President Donald Trump clamoring to defeat U.S. Sen. Jon Tester and conservative groups spending heavily against him, the Democrat is falling back on a well-worn strategy in his pursuit of a third term: make the election about Montana, not Washington.

Montana Senate race brings out both Trump and ‘The Dude’

BILLINGS, Mont. (AP) — Montana Senate candidate Matt Rosendale may not be a household name, but he's surrounded on the campaign trail by President Donald Trump and other big-name Republicans like Vice President Mike Pence, Sens. Lindsey Graham and Rand Paul.

His opponent, Democratic Sen. Jon Tester? He's got "The Dude."

Vice president to campaign in northwestern Montana on Monday

Vice president to campaign for Rosendale in Kalispell

His office said Pence is scheduled to stop in Kalispell on Monday, the day before Election Day. The time and place have not been announced.

Bullock told a crowd gathered in Helena on Wednesday that he wants people representing Montana in Washington, D.C., who can work with the administration but won't just be "lapdogs" for President Donald Trump.

BILLINGS, Mont. (AP) — The Libertarian candidate in Montana's U.S. Senate race threw his support behind his Republican opponent Wednesday in a surprise move that came in response to an election mailer from an unknown group that appeared aimed at undermining Rosendale's support among conservatives.

The chairman of the Montana Libertarians is disavowing comments from the party's U.S. Senate candidate that support Republican Matt Rosendale.

Francis Wendt says the Libertarian Party doesn't support Rosendale because he's from another party and lacks a strong enough stance on privacy issues.