Susan Collins declines to say if she voted Trump in primary

President Donald Trump, also a Republican, is the only...

Trump backs Collins, who refused to vote for him in 2016

PORTLAND, Maine (AP) — President Donald Trump has signaled support for the reelection of Republican Sen. Susan Collins, who emerged in 2016 as one of his critics.

MADISON, Wis. (AP) — Former House Speaker Paul Ryan is moving his family from his hometown of Janesville, Wisconsin, to a house in a Washington, D.C., suburb less than a year after he retired from...

MADISON, Wis. (AP) — A political protester from Wisconsin who once ran against then-House Speaker Paul Ryan will plead guilty to seeking radioactive material under terms of a plea agreement filed...

WASHINGTON (AP) — What's so stunning about former House Speaker Paul Ryan's new admissions regarding President Donald Trump is that his story is now so ordinary.

MADISON, Wis. (AP) — Republicans determined to deliver Wisconsin for President Donald Trump next year will be doing it with a party working to rebuild after the departure of its two biggest stars...

SOUTH BEND, Ind. (AP) — Former U.S. House Speaker Paul Ryan is joining the University of Notre Dame faculty and will be a guest lecturer in political science and economics.

TAIPEI, Taiwan (AP) — The former speaker of the U.S. House of Representatives, Paul Ryan, said Monday that the U.S. wants the rest of the world to be more like Taiwan — praise that will likely...

PBS’ ‘Finding Your Roots’ looks into political leaders’ past

ALBUQUERQUE, N.M. (AP) — Harvard scholar Henry Louis Gates, Jr., hopes this season of his popular PBS series "Finding Your Roots" helps a divided U.S. see how all Americans have unique family links and how those family histories tell the story of the country. 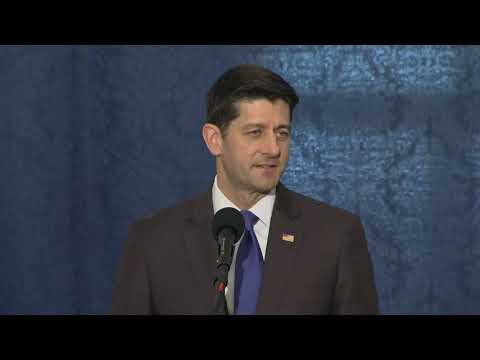 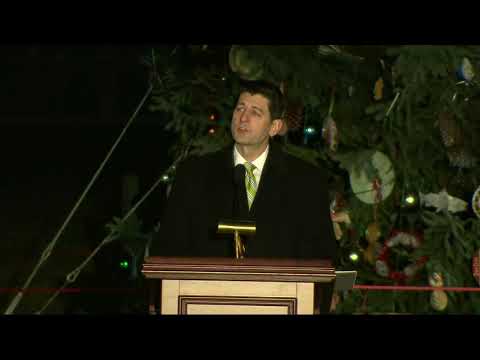 MADISON, Wis. (AP) — U.S. and state flags are flying at half-staff until sunset on Dec. 30 in Wisconsin and elsewhere to honor former President George Herbert Walker Bush who died Friday at age 94.

Gov. Scott Walker was among politicians sending condolences to the Bush family, calling the 41st president a "true gentleman," adding that the country is better because of his service.

House Speaker Paul Ryan said Bush was a man "for all seasons: a war hero, a statesman and affectionate family man."

MADISON, Wis. (AP) — Bryan Steil is resigning as a University of Wisconsin System regent to focus on his first congressional term.

MADISON, Wis. (AP) — Outgoing House Speaker Paul Ryan on Thursday named immigration and the national debt as his two biggest regrets as he prepares to leave office after 20 years in Congress, saying he has no immediate plans to return to public office.

Pelosi’s opponents counting on chaos to deny her speakership

WASHINGTON (AP) — Call it the chaos theory for picking the next House speaker.

Those Democrats trying to stop California Rep. Nancy Pelosi from reclaiming the job say they don't need a rival candidate just yet. Instead, they plan to show that Pelosi lacks the votes to win the race. And then, they say, new challengers will emerge.

WASHINGTON (AP) — Call it the chaos theory for picking the next House speaker.

Those Democrats trying to stop California Rep. Nancy Pelosi from reclaiming the job say they don't need a rival candidate just yet. Instead, they plan to show that Pelosi lacks the votes to win the race. And then, they say, new challengers will emerge.

House Republicans elect McCarthy as leader with eye to 2020

WASHINGTON (AP) — Republican Rep. Kevin McCarthy on easily won an internal party election to take over the shrunken House GOP caucus, handing the seven-term Californian a familiar role of building the party back to a majority as well as protecting President Donald Trump's agenda.

MADISON, Wis. (AP) — A Wisconsin political activist who unsuccessfully ran for House Speaker Paul Ryan's seat in the last two Republican primaries has been indicted on charges alleging that he tried to buy a lethal dose of radioactive material in order to kill someone.

The U.S. Attorney's Office said Thursday that 30-year-old Jeremy Ryan has been formally charged with attempting to possess radioactive material with the intent to cause death of serious bodily harm. He is not related to Paul Ryan.

Pelosi as House speaker would ‘show the power of the gavel’

WASHINGTON (AP) — It's a pivotal moment for Nancy Pelosi — the beginning of a triumphal return as the nation's first female House speaker, or the start of a political reckoning over who should lead Democrats in the Donald Trump era.

SALT LAKE CITY (AP) — Mitt Romney easily won a U.S. Senate seat from Utah on Tuesday, securing a place in Washington for a sometime Donald Trump critic who called for greater dignity and respect in his victory speech.

Romney returns to elected office as the successor to longtime Republican Sen. Orrin Hatch, who is retiring after more than 40 years.

MADISON, Wis. (AP) — While high-profile clashes for governor and the U.S. Senate top the ballot in Wisconsin on Tuesday, Democrats had high hopes for a handful of other key races. The party was unable to seize outgoing House Speaker Paul Ryan's seat or send former U.S. Sen. Herb Kohl's nephew to Congress. Democrats also looked to send Republican Attorney General Brad Schimel packing, hold onto the secretary of state's office and flip the state treasurer's office after eight years of GOP control.

Race for governor ends with focus on taxes, health care

MADISON, Wis. (AP) — The tossup contest for governor of Wisconsin is ending with Republican Gov. Scott Walker and Democratic opponent Tony Evers making last-minute pitches on the issues that largely drove the race from the beginning: health care, taxes and the economy.

ANCHORAGE, Alaska (AP) — Who has the moves in the Alaska governor's race? What were you doing when Roberta Flack topped the charts? And what does the OWL Party stand for? Here's a news guide to Tuesday's election.

FROM NIXON TO TRUMP

Richard Nixon was president, "All in the Family" was the top-rated television show and Roberta Flack's "Killing Me Softly With His Song" topped the charts the day Don Young was sworn in as Alaska's sole representative in the U.S. House.

MADISON, Wis. (AP) — Gov. Scott Walker faces the toughest battle of his political career. U.S. Sen. Tammy Baldwin is trying to fend off a no-holds-barred Republican challenger. Meanwhile, Democrats are trying to seize House Speaker Paul Ryan's congressional seat that's been under Republican control for 23 years, reclaim the majority in the state Senate and retake the attorney general's office after more than a decade of GOP control.

LANSING, Mich. (AP) — A Democratic congressional candidate in Michigan who blundered by telling thousands of supporters that she puts "party before country" will see her gaffe repeated in a weeklong TV ad backed by a Republican group that is hoping to tip the scales in the hotly contested race.

The Latest: Ryan, Trump at odds on birthright citizenship

The top Republican tells WVLK radio in Kentucky, "Well you obviously cannot do that. You cannot end birthright citizenship with an executive order."

Ryan's comments Tuesday offered a rare challenge to the president — from his own party.

Speaker Paul Ryan to campaign for Andy Barr in Kentucky

Barr is running for re-election in Kentucky's 6th Congressional District. He faces Democrat Amy McGrath, a retired Marine fighter pilot who has raised and spent more money than he has.

MADISON, Wis. (AP) — A prominent Wisconsin protester who twice unsuccessfully sought the Republican nomination for House Speaker Paul Ryan's seat has been charged with trying to buy a lethal dose of a radioactive substance online.

The congresswoman from New Hartford told Syracuse.com during an editorial board meeting Monday that the younger Trump will be in her hometown for an event at 4 p.m. Tuesday. The exact location hasn't been released by Tenney's campaign as of late Tuesday morning.

GOP fight over leadership after November vote to be messy

WASHINGTON (AP) — Win or lose in the race for the majority, House Republicans are at risk of plunging into a messy leadership battle after the November election, with the party lacking a clear heir apparent to take the place of House Speaker Paul Ryan.

President Donald Trump has signaled he'd be happy with next-in-line Kevin McCarthy, the majority leader, a longtime ally whom the president calls "My Kevin."

The Latest: Thousands line up to pay tribute to McCain

WASHINGTON (AP) — The Latest on memorial services for the late Sen. John McCain (all times local):

Thousands of people lined up for blocks outside the U.S. Capitol to say goodbye to Senator John McCain as officials, relatives and friends paid tribute to the Vietnam hero and longtime senator lying in state under the majestic dome.

House Speaker Paul Ryan called McCain "one of the bravest souls our nation has produced."

Wave of condemnation hits Trump after summit with Putin

That's the swift and sweeping condemnation directed at President Donald Trump on Monday after he sided with Russian President Vladimir Putin during a stunning appearance in Helsinki — and that's just from the Republicans.

The Latest: House immigration overhaul hanging by a thread

WASHINGTON (AP) — The Latest on the immigration controversy (all times local):

It hasn't been helped by President Donald Trump's running commentary about a bill he only half-heartedly supported and then suggested would never become law.

House struggles to unite behind bills to stem border crisis

WASHINGTON (AP) — Speaker Paul Ryan is pushing ahead with votes on rival House GOP immigration bills, but neither appears to have enough support for passage, prompting President Donald Trump to take executive action Wednesday to stem the crisis of family separations at the border.

WASHINGTON (AP) — The Latest on immigration legislation (all times local):

In a letter Wednesday to the state's 36 House members and two senators, Abbott says, "It can only end with action by Congress to reform the broken immigration system."

NOT REAL NEWS: A look at what didn’t happen this week

A roundup of some of the most popular but completely untrue headlines of the week. None of these stories is legit, even though they were shared widely on social media. The Associated Press checked these out. Here are the real facts:

The Latest: Obama calls for gun safety laws after shooting

WASHINGTON (AP) — The Latest on the gun control debate in Congress after the Florida school shooting (all times local):

Obama tweeted Thursday: "We are grieving with Parkland. But we are not powerless. Caring for our kids is our first job."

WASHINGTON (AP) — Bowing to pressure from fellow Republicans, Texas Rep. Blake Farenthold said Thursday he would not seek re-election to a fifth term, apologizing for his angry outbursts but denying sexual harassment allegations.