PITTSBURGH (AP) — The three congregations attacked at a Pittsburgh synagogue will gather for a joint service Saturday, while a prayer vigil is planned outside their desecrated worship space to mark the time the massacre began one week earlier.

Meanwhile, Friday brought the end of a wrenching series of funerals as the oldest victim, 97-year-old Rose Mallinger, was laid to rest.

After massacre, painstaking and painful care for the dead

PITTSBURGH (AP) — As the first funerals for the victims of the Pittsburgh massacre began, two rabbis and five other volunteers approached the sawhorses cordoning off the Tree of Life synagogue, and an FBI agent led them into the crime scene. Inside the desecrated temple, the men donned white forensic coveralls, face masks and gloves, and set to work.

BOISE, Idaho (AP) — Their anger is all over social media for the whole world to see, with rants about minorities, relationships gone bad or paranoid delusions about perceived slights.

The perpetrators of mass shootings often provide a treasure trove of insight into their violent tendencies, but the information is not always seen by law enforcement until after the violence is carried out. In addition, rants and hate speech rarely factor into whether someone passes a background check to buy guns.

NEW YORK (AP) — People can livestream their every move on Facebook and chatter endlessly in group chats. But in most parts of the U.S., they still can't reach 911 by texting — an especially important service during mass shootings and other catastrophes when a phone call could place someone in danger.

Although text-to-911 service is slowly expanding, the emphasis there is on "slow." Limited funds, piecemeal adoption and outdated call-center technology have all helped stymie growth.

PITTSBURGH (AP) — Sitting in the handicapped lane outside Tree of Life synagogue, Judah Samet watched as a plainclothes officer traded gunfire with the man at the temple door. He was caught in a crossfire and, yet, instead of ducking down, he craned his neck to get a glimpse of the gunman.

"The guy was very focused," he said, pointing his finger like the barrel of a gun and mimicking the staccato clacking of semiautomatic fire. "I saw the smoke coming out of his (muzzle)."

For Jewish journalists, online harassment goes with the job

NEW YORK (AP) — For many Jewish journalists in the U.S., persistent online anti-Semitic harassment has become part of the job.

The phenomenon became pervasive during the 2016 presidential campaign, and there's been a resurgence in recent months ahead of next week's midterm election, according to the Anti-Defamation League.

Trumps pay tribute at synagogue where 11 were fatally shot

PITTSBURGH (AP) — One stone and one white rosebud for each victim.

President Donald Trump and first lady Melania Trump paid homage Tuesday to each of the 11 people slain in the worst instance of anti-Semitic violence in American history. As the Trumps placed their tributes outside the Tree of Life synagogue, protesters nearby shouted that the president was not welcome.

PITTSBURGH (AP) — Attorneys for the city of Pittsburgh are asking a state court to overturn a judge's order striking down firearm restrictions approved after a 2018 mass shooting at a...

PITTSBURGH (AP) — A federal judge has rejected a bid by the suspect in the Pittsburgh synagogue shooting to have the death penalty removed as a potential sentencing option.

PITTSBURGH (AP) — About $5.5 million that poured in from donors after the 2018 Pittsburgh synagogue attack that killed 11 worshippers is being distributed according to a plan outlined Monday by...

One of the top stories of 2018 — the Pennsylvania grand jury report on clergy sex abuse and the Roman Catholic Church’s efforts to cover it up — continued to reverberate strongly in...

PITTSBURGH (AP) — A judge in Pittsburgh says she's not ready to set a trial date for the man charged with killing 11 people inside a synagogue.

PITTSBURGH (AP) — The Latest on a judge's ruling that Pittsburgh may not enforce its own gun laws (all times local):

The city of Pittsburgh plans to appeal a judge's ruling that...

PITTSBURGH (AP) — The Pittsburgh Steelers have held a moment of silence to commemorate the first anniversary of the deadliest attack on Jews in U.S. history.

PITTSBURGH (AP) — The first anniversary of the deadliest attack on Jews in U.S. history was being marked around the world Sunday with community service projects, music and an online...

PITTSBURGH (AP) — The Latest on events marking the one-year anniversary of the shooting at Pittsburgh's Tree of Life synagogue (all times local):

PITTSBURGH (AP) — A virtual remembrance, an overseas concert and community service projects highlight the many plans for commemorating the deadliest attack on Jews in U.S. history on the...

COLLEGE PARK, Md. (AP) — At least 12 white supremacists have been arrested on allegations of plotting, threatening or carrying out anti-Semitic attacks in the U.S. since the massacre at a...

PITTSBURGH (AP) — Leaders of the Pittsburgh synagogue where worshippers were fatally shot last year want to rebuild and renovate the building, turning it into what they hope will be a "center for...

PITTSBURGH (AP) — Lawyers for the man accused of shooting to death 11 worshippers in a Pittsburgh synagogue last year said in a filing Tuesday that the case would be over if federal prosecutors...

There will be some differences — and some constants — over the coming days as the New Light congregation observes Rosh Hashana, the Jewish New Year, for the first time since three of its members...

WASHINGTON (AP) — A federal judge on Friday ordered the immediate release of a man whose relatives reported concerns about his behavior and far-right extremist rhetoric after last year's...

Tree of Life synagogue will get 9/11 survivor tree seedlings

PITTSBURGH (AP) — Seedlings from the 9/11 survivor tree will be donated and planted in Pittsburgh as a memorial for the mass shooting at Tree of Life synagogue that killed 11 people.

Governor to take Tree of Life mezuzah to Holocaust memorials

HARRISBURG, Pa. (AP) — When Pennsylvania Gov. Tom Wolf visits Holocaust memorials in Lithuania and Poland, he will carry the mezuzah that was on the office door of Rabbi Jeffrey Myers when a...

COLLEGE PARK, Md. (AP) — Federal prosecutors on Thursday recommended a 10-month prison sentence followed by 3 years of supervised release for a man whose relatives reported concerns about his...

The decision by federal prosecutors to seek the death penalty for the man accused of killing 11 worshippers inside a Pittsburgh synagogue was made despite opposition from some of the people most...

A man charged with killing 11 people in a Pittsburgh synagogue should face the death penalty if convicted, federal prosecutors said in a court filing Monday.

PITTSBURGH (AP) — Prosecutors and lawyers for the man charged with killing 11 worshippers at a Pittsburgh synagogue last year have agreed to a 120-day extension in the case.

New massacres a jolt for clergy who coped with past attacks

As Americans reel from back-to-back massacres in Texas and Ohio, religious leaders who have experienced violence in their houses of worship are venting their anger at the persisting violence and...

Lawyers for the man accused of killing 11 people at a Pittsburgh synagogue say the FBI has been discouraging witnesses from talking to the defense, undermining the suspect's right to a fair...

PITTSBURGH (AP) — The man charged in the Pittsburgh synagogue massacre still wants to plead guilty in exchange for a life sentence, his lawyer said Thursday.

PITTSBURGH (AP) — A county judge ordered Pittsburgh on Friday not to enforce firearms restrictions inspired by the deadly synagogue shooting in the city until lawsuits filed by gun owners are...

Gunman told 911 ‘I just shot up a synagogue’ after attack

SAN DIEGO (AP) — A gunman who killed a woman and wounded three during services at a Southern California synagogue later told a 911 dispatcher he had done it because "the Jewish people are...

HARRISBURG, Pa. (AP) — Amid a rise of violent attacks against the Jewish community, students and staff members at Jewish day schools in the same neighborhood as the Pittsburgh synagogue that was...

Report: Violent anti-Semitic attacks in US doubled in 2018

Violent attacks against the Jewish community in the United States doubled last year, while overall attacks that also include vandalism and harassment remained near record-high levels, the...

Rabbi: victim ‘took the bullet for all of us’ 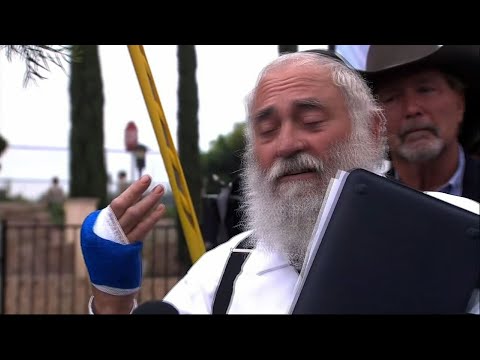 POWAY, Calif. (AP) — In the minutes after the gunman fled the scene of a shooting that killed a woman inside a Southern California synagogue, a wounded Rabbi Yisroel Goldstein wrapped his bloodied...

‘THIS MUST STOP’: Reaction to the synagogue shooting

A gunman opened fire inside a synagogue near San Diego on Saturday as worshippers celebrated the last day of Passover, authorities said. The attack came exactly six months after 11 people were...

19-year-old kills 1, wounds rabbi and 2 others at synagogue

POWAY, Calif. (AP) — A 19-year-old gunman opened fire inside a synagogue near San Diego as worshippers celebrated the last day of a major Jewish holiday, killing a woman and wounding the rabbi and...

POWAY, Calif. (AP) — The Latest on a shooting at a synagogue in Southern California (all times local):

A Jewish leader has identified the victims of a shooting at a...

The Latest: Vigil at Tree of Life after California shooting

PITTSBURGH (AP) — The Latest on Pittsburgh's reaction to the deadly synagogue shooting in California (all times local):

Residents of Pittsburgh have gathered at the Tree of...

PITTSBURGH (AP) — The Pittsburgh Post-Gazette won a Pulitzer Prize in breaking news Monday for its coverage of the mass shooting at a Pittsburgh synagogue last year.

PITTSBURGH (AP) — A Pittsburgh synagogue where 11 people were killed in a mass shooting last year is inviting young people worldwide to submit artwork to cover the fencing surrounding the...

Plea agreement negotiations are underway to resolve gun-related charges against a self-described white nationalist from Washington, D.C., whose relatives reported concerns about his behavior after...