The pup has been transferred to a rehabilitation center in Buzzards Bay,...

HONOLULU (AP) — Wildlife officials reported the death of a pregnant Hawaiian monk seal who was found at a beach on Kauai.

The National Oceanic and Atmospheric Administration announced the...

KAILUA-KONA, Hawaii (AP) — There did not appear to be any injuries among a group of Hawaiian monk seals after one of the animals was chased by unleashed dogs on the Big Island, officials...

Isolated by oceans: Hawaii, other islands tamp down virus

HONOLULU (AP) — Flying to a faraway beach might seem like the perfect way to escape a pandemic, but for isolated Pacific islands, controlling the coronavirus means cutting off tourism....

HONOLULU (AP) — The attorney for a man who slapped a Hawaiian monk seal while visiting Oahu issued an apology on behalf of his client, who paid fines issued by federal and state...

Aquarium seals must be wondering: Who’s that masked trainer?

BOSTON (AP) — Humans can't always recognize each other in face masks, so imagine the confusion that wild animals in captivity must feel.

At the New England Aquarium in Boston, workers who...

HONOLULU (AP) — A Hawaiian monk seal has died from a parasitic disease while in treatment at a marine center, an official said.

The 13-year-old female named Pohaku died last week at the...

BOSTON (AP) — The federal government wants people seeking social distance to know they still have to stay away from seals they encounter at the beach.

The seal, Amelia Bedelia, has been part of a cast of storybook characters...

LEWES, Del. (AP) — A baby seal has been rescued on one of Delaware's beaches.

The News Journal reported that the young gray seal was recovered Tuesday on the beach at Cape Henlopen State...

MIAMI (AP) — New measures to seal off borders to reduce the spread of the novel coronavirus have left cruise ships stranded in the Caribbean, South America and Europe, with local governments...

DEWEY BEACH, Del. (AP) — A team of volunteers rescued a 1-month-old gray seal pup who was found injured and stranded along a Delaware beach over the weekend.

WASHINGTON (AP) — A male harbor seal considered geriatric for his species has died at the Smithsonian's National Zoo.

Luke, 35, was humanely euthanized last week, according to a statement ...

It’s seal season in Delaware. What to do if you see one?

LEWES, Del. (AP) — The public needs to keep a safe distance from the seals that will be present along Delaware beaches and other waterways through April, according to the state’s official marine...

PITTSBURGH (AP) — Officials at the Pittsburgh Zoo and PPG Aquarium were mourning the death of a northern elephant seal that was rescued in California.

ANCHORAGE, Alaska (AP) — A federal agency will decide by September how much ocean and coast in northern Alaska will be designated as critical habitat for two ice seal species.

BARNSTABLE, Mass. (AP) — Researchers have fitted 50 great white sharks found in Cape Cod waters this season with tracking and data-logging devices to study how the species kills seals to benefit...

Scientists: People getting too close to Hawaiian monk seals

HONOLULU (AP) — Photos posted on social media indicate the public has been getting too close to Hawaiian monk seals, a critically endangered species protected by federal and state law, government...

ANCHORAGE, Alaska (AP) — Alaska’s northern fur seal population for three decades has been classified as depleted, but the marine mammals are showing up in growing numbers at an unlikely location:...

HOMER, Alaska (AP) — Two young harbor seals are back where they belong after being rehabilitated through the Alaska SeaLife Center's Wildlife Response Program and released into Kachemak...

HONOLULU (AP) — A Hawaiian monk seal has been released in good health after her second rescue by a marine mammal hospital, officials said.

Group wants to end protections for seals to deal with sharks

BOSTON (AP) — Researchers on Cape Cod are launching a new study focused on the hunting and feeding habits of the region's great white sharks following last year's two attacks on humans, including...

ANCHORAGE, Alaska (AP) — An environmental group sued the Trump administration Thursday for failing to designate critical habitat for two species of seals that rely on sea ice off Alaska's...

ANCHORAGE, Alaska (AP) — At least 60 ice seals have been found dead along Alaska's west coast and federal biologists on Wednesday were trying to determine the cause.

BOSTON (AP) — A plan to develop an acoustic system to chase away seals in order to prevent shark attacks is the latest front in the debate about how Cape Cod should respond in the wake of last...

Hawaiian monk seal that had CT scan suffering from infection

KAILUA-KONA, Hawaii (AP) — A CT scan performed on a Hawaiian monk seal at a hospital has shown that the animal is suffering from muscle inflammation and infection, officials said.

ANCHORAGE, Alaska (AP) — The mysterious animal that people say they see in Iliamna Lake is dark, longer than 15 feet, with a long head and tail and distinct fins. It isn't a whale or a seal, and...

BEIJING (AP) — Animal rights groups on Saturday cheered the release of 37 spotted seal pups rescued from traffickers into the wild in northern China in a small victory for efforts to save the...

Public asked to give space to endangered Hawaiian monk seal

HONOLULU (AP) — The public should give adequate space to ensure the safety of a monk seal that has been resting on a Hawaii beach, officials said.

KAILUA-KONA, Hawaii (AP) — A critically ill Hawaiian monk seal has undergone a CT scan in the hopes of determining the cause of its illness.

Trump takes a step back from threat to close southern border

WASHINGTON (AP) — President Donald Trump eased up on his threats to close the southern border as officials across his administration explored half-measures that might satisfy the president's urge...

BOSTON (AP) — Heavy surf has brought many young seals to New England shores in recent days, and scientists say it's important for people to leave the animals alone.

ALBANY, N.Y. (AP) — A silvery seal with soulful black eyes and a spotted coat is making a splash in the Hudson River 150 miles inland from the Atlantic.

PORTLAND, Maine (AP) — Experts are trying to pinpoint the cause of a sharp increase in harp seal strandings along the East Coast.

Marine Mammals of Maine reports that it has responded to 63...

SALISBURY, Mass. (AP) — A seal pup is back in the ocean after being rescued from a road in Massachusetts.

The Seacoast Marine Mammal Rescue Team says it responded to calls Wednesday of a gray seal pup in the middle of Beacon Street, near the beach.

The organization says the pup, which is likely less than 2 months old, apparently followed a beach access path and wound up on the side street.

Beach taken over by elephant seals to reopen for viewing

SAN FRANCISCO (AP) — Tourists unable to visit a popular beach in Northern California that was taken over by a colony of nursing elephant seals during the government shutdown will be able to get an up-close view of the creatures, officials said Friday.

Point Reyes National Seashore rangers and volunteer docents will lead small groups of visitors starting Saturday to the edge of a parking lot so they can safely see the elephant seals and their newborn pups, said park spokesman John Dell'Osso. 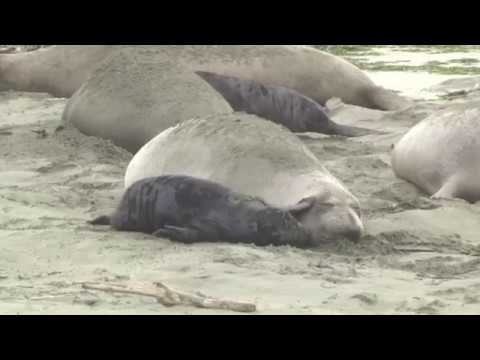 SALT LAKE CITY (AP) — National park visitors cut new trails in sensitive soil. They pried open gates while no one was watching. They found bathrooms locked, so they went outside. One off-roader even mowed down an iconic twisted-limbed Joshua tree in California.

SAN SIMEON, Calif. (AP) — Central Coast authorities had to become elephant seal wranglers when one of huge marine mammals was found on the inland side of Highway 1, well away from other seals hauled out on a beach near San Simeon.

The San Luis Obispo County Sheriff's Office posted video of Wednesday's successful effort to shoo the young bull back across the highway and down to the shore.

SAN FRANCISCO (AP) — A colony of elephant seals took over a beach in Northern California during the government shutdown when there was no staff to discourage the animals from congregating in the popular tourist area, an official said.

Biologists say seal that spent weekend on beach was resting

Sarah Callan, assistant manager of the animal rescue program at Mystic, says officials had been monitoring the seal after it was spotted Saturday on Easton's beach.

DURHAM, N.H. (AP) — The University of New Hampshire is partnering with the Seacoast Science Center to help determine what is causing the deaths of seals and other marine mammals found along the northern New England seacoast.

SALT LAKE CITY (AP) — A Utah state lawmaker is leading an effort to redesign a clunky Utah state flag that critics have called an "S.O.B." — seal on a bedsheet.

State Rep Steve Handy recently announced he will introduce a bill creating a flag review commission that could ultimately scrap the turbulent form of the 100-year-old flag for a new, simpler one, The Salt Lake Tribune reports .