NEW YORK (AP) — Fox News Channel's Sean Hannity has emerged as an unexpected critic of the Minneapolis police for their actions in the Memorial Day death of George Floyd.

NEW YORK (AP) — Two television doctors — Dr. Oz and Dr. Phil — are finding themselves trying to explain comments they made about coronavirus restrictions during appearances on Fox News Channel...

WASHINGTON (AP) — President Donald Trump says that federal officials are developing guidelines to rate counties by risk of virus spread, as he aims to begin to ease nationwide guidelines meant to...

WASHINGTON (AP) — President Donald Trump and his allies are planning sustained personal and reputational attacks against Joe Biden, casting him as ill-equipped for the presidency and pushing...

SALT LAKE CITY (AP) — A state coronavirus-response team in Utah is calling comments from President Donald Trump “misinformation” and warning people to stay home from work if they show symptoms...

Her prime-time show, which has been on for more than 11 years, had its largest audience ever...

ANCHORAGE, Alaska (AP) — U.S. Sen. Lisa Murkowski, a Republican from Alaska, said she was disturbed to hear Senate Majority Leader Mitch McConnell say there would be "total coordination" between...

WEST PALM BEACH, Fla. (AP) — The White House said President Donald Trump will be in Florida this weekend to speak at a conference for young conservatives.

Hearings great for cable news, less so for broadcast

NEW YORK (AP) — Five days of impeachment hearings were a boon to programmers and accountants at the cable news networks. For the big broadcasters, not so much.

NEW YORK (AP) — Millions of Americans are choosing to experience the impeachment hearings through media filters that depict the proceedings as either a worthless sham or like Christmas in...

NEW YORK (AP) — Critics of President Donald Trump who wonder about the tenacity of his supporters need only to spend three hours with Fox News Channel's headliners to get an idea why.

NEW YORK (AP) — The one constant with President Donald Trump's increasingly frequent attacks on Fox News has been the network's refusal to respond, even as the president complains that "Fox isn't...

Hannity to de Blasio: ‘You drive me crazy!’

NEW YORK (AP) — Intensely loyal viewers routinely make Fox News Channel the most-watched cable network each week. So how many people want to watch a miniseries about Roger Ailes, the man who...

NEW YORK (AP) — Fox News Channel says that Sen. Bernie Sanders will appear on a televised town hall on April 15, making him the first Democratic candidate to venture onto Fox for this type of...

NEW YORK (AP) — When there's a blowout in the normally tight race for cable news supremacy between Sean Hannity and Rachel Maddow, it's best to check the political headlines to learn...

NEW YORK (AP) — Rachel Maddow isn't backing away from her coverage of President Donald Trump and any connection to Russia's involvement in trying to influence the 2016 presidential campaign. The...

Based on ratings from the nation's largest media markets, the Nielsen company said CBS and the Turner Networks had the...

NEW YORK (AP) — For Sean Hannity, the "witch hunt" was finally over. Rachel Maddow considered it the start of something.

The diametrically opposed opinion hosts, who vie for the distinction...

Editorials from around New York

By The Associated PressFebruary 13, 2019 GMT

Less than a day after congressional Democrats and Republicans announced they had a deal in principle to avert another government shutdown, President Trump harrumphed displeasure: "I'm not happy about it. It's not doing the trick."

WASHINGTON (AP) — Secretary of State Mike Pompeo says he is sending a team "someplace in Asia" to set up a second summit between President Donald Trump and North Korean leader Kim Jong Un by the end of February.

Pompeo on Wednesday told Fox News Channel's Sean Hannity that his team is "headed that way now to lay the foundations" for steps toward the denuclearization of the Korean Peninsula as well as "a brighter future for the North Korean people."

NEW YORK (AP) — When CNN gave Chris Cuomo its 9 p.m. ET time slot last June, there was reason to fear it could be a television suicide mission.

After all, that hour is where the big dogs roam. Fox News Channel's Sean Hannity and MSNBC's Rachel Maddow are the top two personalities in cable television. They still are, but Cuomo's "Prime Time" quickly established itself as CNN's most-watched program and, with 1.64 million viewers in January, is having its best month, the Nielsen company said.

By The Associated PressDecember 27, 2018 GMT

In a story Dec. 24 about (topic), The Associated Press reported erroneously the last name of actress Gabrielle Carteris.

NEW YORK (AP) — The drumbeat of bad news for President Donald Trump hasn't been good for his most prominent backer in the media.

While Fox News Channel's Sean Hannity will end 2018 as cable news' most popular personality for the second year in a row, he's been slumping in the ratings since the midterm elections and ominous stories related to Special Counsel Robert Mueller's investigation of the president.

The emails showed one of Pruitt's aides suggesting the interview, passing along "talking points" and given the chance by a Fox producer to approve a script written to introduce Pruitt.

Fox is becoming the latest television news operation to stake out digital turf. Rather than an attempt to seek out young cord-cutters, Fox Nation is a subscription-based service designed to complement Fox News Channel.

Hannity made no appearance on Fox's midterms coverage, even though the network had previously announced that its prime-time opinion hosts Hannity, Tucker Carlson and Laura Ingraham would all be part of it. Both Carlson and Ingraham did appear.

NEW YORK (AP) — Fox News said Tuesday that it has addressed the "unfortunate distraction" of Sean Hannity and Jeanine Pirro speaking at President Trump's campaign rally in Missouri the night before, and that it doesn't condone such behavior.

The network did not say what, if any, discipline that the two network personalities would face. 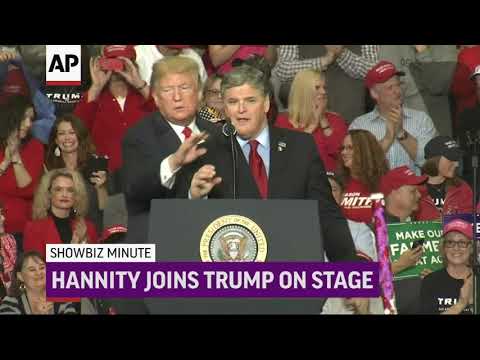 NEW YORK (AP) — Sean Hannity spoke from the stage of President Donald Trump's last midterm election rally on Monday, after Fox News Channel and its most popular personality had insisted all day that he wouldn't.

Hannity appeared on the podium in a Missouri arena after being called to the stage by Trump. Another Fox News host, Jeanine Pirro, also appeared onstage with the president.

"By the way, all those people in the back are fake news," Hannity told the audience.

Hannity joins Trump on stage despite claiming he wouldn’t

NEW YORK (AP) — Sean Hannity spoke from the stage of President Donald Trump's last midterm election rally, after Fox News Channel and its most popular personality had insisted all day that he wouldn't.

Hannity appeared on the podium in a Missouri arena Monday night after being called to the stage by Trump. Another Fox News host, Jeanine Pirro, also appeared onstage with the president.

"By the way, all those people in the back are fake news," Hannity told the audience.

Trump’s Road Show: A musical moment of grace in Missouri

By The Associated PressNovember 6, 2018 GMT

Subscriptions to the service, Fox Nation, can be purchased starting Sunday. The cost is $5.99 monthly or $64.99 for a year.

NEW YORK (AP) — Fox News Channel has recently pulled back from airing President Donald Trump's campaign-style rallies during prime time, a move that could put a crimp in Republican efforts to reach voters in the weeks before midterm elections.

Trump on Kavanaugh: ‘Get on with it’ 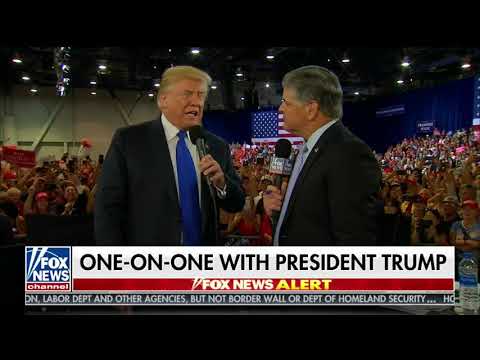 The Latest: Trump says Kavanaugh delay has gone on too long

WASHINGTON (AP) — The Latest on Supreme Court nominee Brett Kavanaugh and a woman who accuses him of sexually assaulting her decades ago (all times local):

Trump tells Fox News host Sean Hannity before a campaign rally in Las Vegas, "I don't think you can delay it any longer."

Trump says, "They've delayed it a week already" and "have to get on with it."

NEW YORK (AP) — If it's a lousy week for President Donald Trump, it's usually a good week for Rachel Maddow.

NEW YORK (AP) — A generation ago, the likes of Walter Cronkite, Peter Jennings and Diane Sawyer were the heroes of television news. Now the biggest stars are arguably Sean Hannity and Rachel Maddow.

Notice the difference? Cronkite, Jennings and Sawyer reported the news. Hannity and Maddow talk about the news, and occasionally make it. But you never doubt how they feel about it.

The Latest: Trump: I’m torn on when to shut down government

President Donald Trump says he remains "a little bit torn" about whether it would be better to shut down the government before or after the midterm elections in an effort to secure funding for his long-promised border wall.

Roseanne Barr on racist tweet: ‘I wish I worded it better’

LOS ANGELES (AP) — In Roseanne Barr's first TV interview since her ABC sitcom was canceled for a racist tweet, the comedian apologized for her "ill-worded" post and insisted she isn't a bigot.

During her hour-long interview on Sean Hannity's Fox News Channel show Thursday, Barr lamented the damage done to her by her tweet about Valerie Jarrett, a former adviser to President Barack Obama.

"It cost me everything," Barr said. "I wish I worded it better."

(THE CONVERSATION) In recent years, Jon McNaughton has emerged as one of the most well-known artists on the political right.

President Donald Trump is dismissing suggestions that Russia has compromising intelligence about him after a news conference in which Trump declined to criticize President Vladimir Putin for Russian interference in the 2016 U.S. presidential election.

Trump tells Fox News' Sean Hannity that Putin "said as strongly as you can say it, they have no information on Trump."