HILO, Hawaii (AP) — A Hawaii mountain town that suffered serious economic damage from a volcanic eruption has been wounded by another natural disaster as the coronavirus hits its...

HILO, Hawaii (AP) — The Federal Emergency Management Agency and Hawaii County agreed on an $82 million damage assessment to be used to repair roads inundated by lava during a massive volcanic...

HILO, Hawaii (AP) — Thurston Lava Tube in Hawaii Volcanoes National Park could reopen within a month if a final repair project is successful, an official said.

WELLINGTON, New Zealand (AP) — Another person who suffered critical injuries from an eruption of a New Zealand volcano last month has died, bringing the death toll to 21, police said...

WELLINGTON, New Zealand (AP) — An Australian man who was injured in a volcanic eruption in New Zealand more than a month ago has died, becoming the 20th victim of the disaster, officials said...

HILO, Hawaii (AP) — The Hawaii island geothermal power station that was knocked offline by a volcanic eruption hopes to produce lower cost electricity under a new agreement with a state utility,...

ATLANTA (AP) — An Atlanta area woman was among the 19 people killed by a volcanic eruption in New Zealand last month, police confirmed Friday.

WELLINGTON, New Zealand (AP) — The families of American newlyweds who were badly injured during a volcanic eruption in New Zealand said Tuesday the two are progressing as well as could be hoped...

WELLINGTON, New Zealand (AP) — The death toll from a volcanic eruption in New Zealand has risen to 19 after police said Monday another person died at an Auckland hospital overnight.

Police: 2 missing bodies in volcano eruption may be at sea

WELLINGTON, New Zealand (AP) — New Zealand authorities said Wednesday they believe the two bodies that remain missing after a deadly volcanic eruption last week have been washed out to sea and may...

PERTH, Australia (AP) — Police said Tuesday that an Australian teenager and a New Zealand tour guide are the two people presumed dead but whose bodies have not been found after last week’s...

Cricketers to pay tribute to volcano victims before 1st test

Police say an injured person has died in a New Zealand hospital, bringing the death toll from volcanic eruption to 6

Up to 13 feared dead in volcanic eruption off New Zealand

TAURANGA, New Zealand (AP) — A volcano off the New Zealand coast erupted Monday with a towering blast of ash and scalding steam as dozens of tourists were exploring its moon-like surface, killing...

Hawaii County given extension for work on lava-damaged road

HILO, Hawaii (AP) — Hawaii scientists say lava from the 2018 Kilauea volcanic eruption has triggered an algae bloom that could be seen from outer space, a newspaper said.

HILO, Hawaii (AP) — Hawaii geologists have measured high temperatures in rock ripped up by road crews during reconstruction of a Big Island highway inundated by lava.

A quick look at business insurance for natural disasters

NEW YORK (AP) — With earthquakes in California and Hurricane Barry striking states along the Gulf of Mexico and in the Midwest, small business owners should look at their insurance policies and...

KAILUA-KONA, Hawaii (AP) — A Hawaii man has been sentenced to prison for firing a gun at a group of people during a volcanic eruption, a report said.

HILO, Hawaii (AP) — A Hawaii residential association is exploring ways to curb tourist access to a subdivision that lost numerous homes to a volcanic eruption, a report said.

Bradenton family rises from the ashes

The Spanish word for "slaughter" is how Fulmencio Eladio describes what unfolded in his Guatemalan village just over one...

Italy's Civil Protection officials said the quake, which struck at 3:19 a.m., was part of a swarm of some 1,000 tremors, most of them barely perceptible, linked to Etna's volcanic eruption this week.

TANJUNG LESUNG, Indonesia (AP) — Body bags were laid out along the shattered coastline as Indonesian authorities stepped up efforts to collect the dead and save the injured Monday in the aftermath of a tsunami that was apparently triggered by a volcanic eruption. The death toll climbed to 373 and was certain to rise. 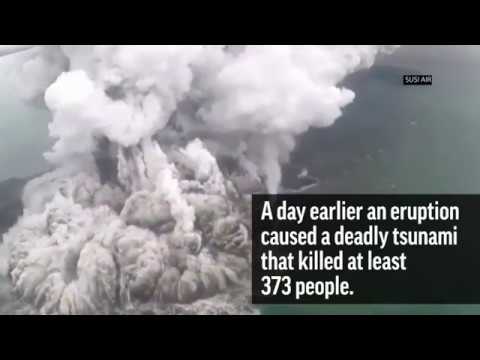 TANJUNG LESUNG, Indonesia (AP) — The Latest on a tsunami that hit along Indonesia's Sunda Strait (all times local):

Indonesia's disaster agency says the death toll from the weekend tsunami has climbed to 373.

Disaster agency spokesman Sutopo Purwo Nugroho said Monday that 128 others were missing in the disaster, with 1,459 injured.

ROME (AP) — Archaeologists have unearthed the petrified remains of a harnessed horse and saddle in the stable of an ancient villa in a Pompeii suburb.

Osanna was quoted on Sunday as saying the remains of two or three other horses were also discovered.

The Hawaii County Council adopted a resolution Tuesday to accept the funding, the Hawaii Tribune-Herald reported .

UNISDR, as the office is known, said the reported loss of resources and assets like homes, factories and farms due to more frequent and widespread climate-related disasters rose 151 percent compared to the previous 20-year period.

He will start the tour June 26 in Brasilia, where he will meet Brazilian president Michel Temer.

The following day Pence will be in Manaus, capital of the Brazilian northern state that borders Venezuela.

The vice president has said he intends to bring attention during his trip to the deepening humanitarian crisis in Venezuela.

SAN MIGUEL LOS LOTES, Guatemala (AP) — The latest on the eruption of Guatemala's Volcano of Fire (all times local):

Guatemalan officials say 109 deaths have now been confirmed from this week's eruption of the Volcano of Fire.

The National Institute of Forensic Sciences says in a statement that 10 bodies were received by morgues on Thursday, adding to the previous total of 99.

Some 200 people are said to be missing, so the final toll is likely to be even higher.

NASHUA, N.H. (AP) — A church in New Hampshire is collecting donations to help the thousands of people left homeless from a destructive volcanic eruption in Guatemala.

The eruption of the Volcano of Fire Sunday surprised residents in nearby Guatemalan mountain communities, which had little time to evacuate. At least 75 people have died and over 12,000 people have been evacuated.