LITTLE ROCK, Ark. (AP) — Historic flooding is hitting communities along the Arkansas River despite little rain in the region, thanks to downpours in areas farther north and efforts by officials to control the powerful surge of water.

At least one death was blamed on the flooding.

Intense rain in Kansas and northeast Oklahoma strained aging dams and levees, and a reservoir in Oklahoma that drains a massive watershed hit record water levels. The U.S. Army Corps of Engineers opened a large dam to control the river flow, which put Fort Smith — the second-largest city in Arkansas — in the path of record-breaking flooding expected to last all week.

Among the drenched: Rick and Cindy Gering, whose Fort Smith home flooded as the river swelled its banks over the weekend. The river also overtopped two levees southeast of the city on Tuesday.

Rick Gering said the house survived flooding in 2015, but that he and his wife got nervous Saturday after the National Weather Service increased its flood crest prediction. The couple built a wall of sandbags around their home and headed for a hotel.

A neighbor later told them it didn’t help much. The home is now filled with about 3 feet (0.9 meters) of water. Gering said he was thankful they had time to leave, but said it was like “watching a slow brutal death to your home.” 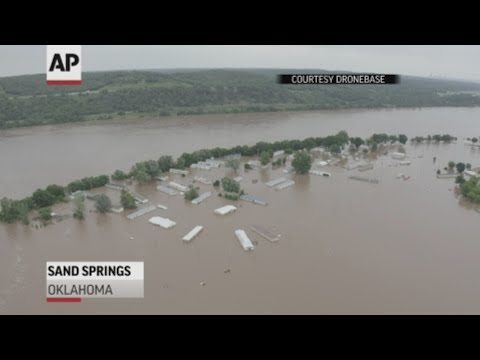 The Arkansas River was forecast to peak at record level in the area on Wednesday. The river levels also prompted the temporary closure of two major bridges into the city, and forecasters said more rain was possible in already waterlogged areas up the river.

A state official said most residents had already been warned to evacuate areas protected by the levees that breached Tuesday, though it’s unclear how many did.

The Army Corps of Engineers has ratcheted up the flow from a hydroelectric dam northwest of Tulsa, Oklahoma, to 275,000 cubic feet (7,787 cubic meters) per second to help drain the swollen Keystone Lake reservoir.

The popular recreational area drains into the Arkansas River, but water levels as of Tuesday were above normal — by a record 34 feet (10 meters).

The reservoir drains a watershed of more than 22,000 square miles (57,000 square kilometers) in areas of northeastern Oklahoma and southeastern Kansas, where up to 20 inches (51 centimeters) of rain has fallen in the past month. In all of 2018, the same areas recorded between 30 and 45 inches of rain (76 to 114 centimeters).

The release of water from the Keystone Dam is necessary to prevent the reservoir from spilling over the flood-control structure, which would allow floodwaters to flow uncontrolled down the river, said Preston Chasteen, deputy chief of public affairs for the Corps’ Tulsa District.

“The whole purpose of a dam is to capture that flood water and not let it run freely down the river,” he said. “If these dams weren’t in place to control these releases, I think the circumstances would be far worse than they currently are.”

In Tulsa, officials warned that levees built in the 1940s were facing higher flows for longer periods of time than they’ve ever seen. By Tuesday, hundreds of homes in Sand Springs, Webbers Falls, and other Oklahoma communities along the Arkansas River had been evacuated. More than 1.2 million people live in the Tulsa metropolitan area.

In addition to the dam’s releases, two other rivers that drain separate watersheds are also contributing to flooding, Chasteen said.

The Neosho River, whose watershed includes portions of Missouri and Arkansas, and the Vertigris River, which drains parts of Kansas and Oklahoma, merge with the Arkansas River in Muskogee, Oklahoma, about 45 miles (72 kilometers) southeast of Tulsa.

In Fort Smith, residents awaited Wednesday’s record-breaking crest, predicted at 42.5 feet (13 meters). By Monday night, the Arkansas Department of Transportation closed four bridges that typically carry more than 100,000 cars daily into Fort Smith, redirecting traffic to a single bridge that has a capacity of about 8,200.

Two bridges were reopened around noon on Tuesday because water levels weren’t as high as expected. But officials said they were keeping an eye on both amid the flooding conditions. Officials also noted that public drinking water was drinkable and safe.

Divers searching a van submerged in floodwaters at Fort Chaffee on Tuesday found the body of a man inside. A police spokesman says the man was believed to have driven around barricades set up on a flooded road and into the floodwaters Monday night.