HARRISBURG, Pa. (AP) — Another 2.6 million people across western Pennsylvania began to emerge from pandemic restrictions Friday as Gov. Tom Wolf announced that 12 more counties soon will join them in a partial easing.

Wolf said that Adams, Beaver, Carbon, Columbia, Cumberland, Juniata, Mifflin, Perry, Susquehanna, Wyoming, Wayne and York will be the next batch of counties moving to the “yellow” phase of his reopening plan, effective May 22. They are primarily in the south-central and northeast regions of the state.

They’ll join residents of 13 lightly impacted counties — including the cities of Pittsburgh, Johnstown and Altoona — where Wolf lifted his stay-at-home orders on Friday and gave permission for retailers and other types of businesses to reopen. Twenty-four counties across a vast swath of primarily rural northern Pennsylvania were the first to see a partial reopening last week.

All told, by the end of next week, more than 40% of Pennsylvania’s population of 12.8 million will have seen an easing of pandemic restrictions that were intended to prevent hospitals from becoming overwhelmed with very ill COVID-19 patients.

The state’s efforts to contain a virus outbreak that has sickened over 60,000 and killed more than 4,300 statewide have cratered the Pennsylvania economy, and Wolf is under pressure from Republican and some Democratic county officeholders to reopen more quickly. 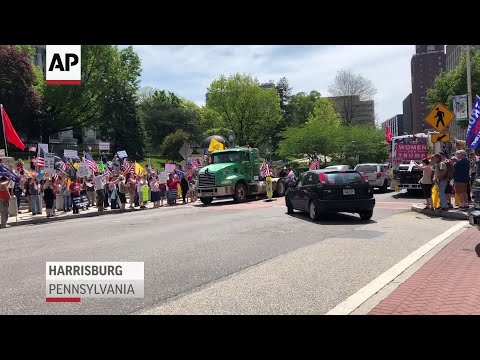 The GOP-controlled Lebanon County Board of Commissioners voted 2-1 Friday to lift restrictions on their own — without Wolf’s blessing. Wolf has threatened to block coronavirus funding to counties that defy him, but didn’t say Friday whether he would follow through.

“The unfortunate thing about a decision like that is why anybody would think they could make it, going to yellow in the face of a virus that’s sitting there saying, ‘I don’t think you’re really ready.’ It could put the lives of folks in that county at risk,” he said at a video news conference.

Critics of Wolf’s shutdown orders, primarily Republicans, contend that they are inflicting undue suffering and are no longer warranted, given that infection rates are declining in many areas of the state. Some GOP-controlled counties, including Huntingdon and Dauphin, have not officially declared an end to some of Wolf’s pandemic restrictions — as Lebanon did Friday — but say they won’t enforce his business shutdown.

People are “voting with their feet and going to work,” said Josh Parsons, chairman of the Lancaster County Board of Commissioners.

Small business owners in particular have chafed against Wolf’s closure of “non-life-sustaining” businesses, saying it threatens to drive them out of business. A handful of gyms, barbers, hair salons and restaurants statewide have opened in defiance of the governor. Wolf has said they are jeopardizing their business licenses and other governmental approvals to operate.

About 2 million Pennsylvania residents have lost their jobs since mid-March, and food and milk giveaways draw long lines. Some people have gone two months without a paycheck because of the state’s problem-plagued online unemployment benefits portal.

In other coronavirus-related developments:

As many as 2,000 people gathered at the Capitol for another anti-shutdown protest, as speakers and attendees lambasted Wolf for saying it was “cowardly” for counties to go against his shutdown orders. Many carried Trump signs and wore Trump paraphernalia, while an RV festooned with Trump banners blared his speeches over a speaker.

Capitol Police estimated the crowd at 1,750 to 2,000, few of whom wore masks. Many of the signs were directed at Wolf and Health Secretary Rachel Levine, including ones calling for Wolf’s impeachment and Levine’s firing.

One attendee, Barry Sheeder of Chambersburg, said his wife’s child care center is on the verge of going out of business because of the shutdown. It can only care for the children of essential workers, such as emergency responders.

Meanwhile, Josh Hogan, who started a Facebook page called ReOpen Bucks County, said he is seeing the shutdown destroy many small businesses, from karate studios to restaurants, and it is long past to let businesses reopen.

The Health Department on Friday confirmed that Pennsylvania has seen cases of a serious rare inflammatory condition in children linked with the coronavirus.

Levine could not provide additional details. Now that CDC has published a case definition, Pennsylvania hospitals will begin reporting new cases through the state’s data system, she said.

The condition has been reported in at least 110 New York children and in several kids in other states. A few children have died.

Some children may have symptoms resembling Kawasaki disease, a rare condition in children that can cause swelling and heart problems.

The Pennsylvania Department of Health on Friday reported 124 additional coronavirus deaths, raising the statewide total to 4,342.

Most of the deaths, 89, occurred over the past several weeks, but were only reported Friday as the Health Department reconciles its records with data provided by hospitals, health systems, municipal health departments and nursing homes.

The number of infections is thought to be far higher than the state’s confirmed case count because many people have not been tested, and studies suggest people can be infected without feeling sick. There is no data on how many people have fully recovered.

For most people, the virus causes mild or moderate symptoms that clear up in a couple of weeks. Older adults and people with existing health problems are at higher risk of more severe illness, including pneumonia, or death.

COVID-19 has taken an especially hard toll on the state’s nursing homes and other facilities that care for older adults, which account for more than two-thirds of the statewide death toll.