Why US-China trade war risks hurting firms in both countries

WASHINGTON (AP) — U.S. businesses are imploring President Donald Trump not to expand his tariffs to $300 billion in goods from China that have so far been spared in his trade war with Beijing.

These companies warn that the additional tariffs would drive up prices for consumers, squeeze profits and leave U.S. companies at a competitive disadvantage to foreign rivals that aren’t subject to higher taxes on the components they buy from China.

And in a sign that commercial combat between the world’s two biggest economies is hurting business on both sides of the Pacific, the Chinese telecommunications giant Huawei warned that the hostilities with the Trump administration will shrink its expected revenue by $30 billion over the next two years.

Huawei is at the heart of the trade war that Beijing is engaged in with the Trump administration, which has accused Chinese companies like Huawei of committing forced technology transfers from American companies and stealing their trade secrets. Last month, the U.S. placed Huawei on its “Entity List,” which effectively bars American companies from selling components to Huawei without government approval.

In the meantime, American businesses, trade groups and individuals are pleading with the administration to drop its threat to tax the remaining Chinese imports that Trump hasn’t already hit with tariffs — or at least spare the particular imports that they and their customers rely on. Some are appearing in person to air their grievances in seven days of hearings in Washington that began Monday. 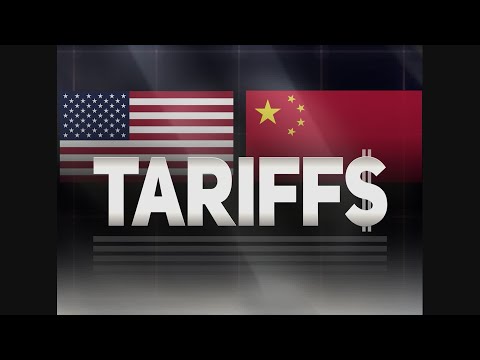 A common theme in their pleas is that American businesses — not China, as Trump often asserts — must pay the import taxes the president is imposing on Chinese goods. And in the end, many of these companies will pass their higher costs on to their customers.

Eleven rounds of negotiations have failed to resolve the dispute over China’s aggressive drive to surpass America’s technological dominance. Businesses and investors say they hope the negotiations will gain momentum if Trump and President Xi Jinping hold a face-to-face meeting at a Group of 20 summit in Osaka, Japan in two weeks.

“Most businesses are almost praying for a solution,” said Patrik Berglund, who tracks global trade as the CEO of Xeneta, an Oslo, Norway ,firm that provides data on the shipping industry. “These things will have enormous consequences. We’re so connected in this global world.”

This week, U.S. Trade Representative Robert Lighthizer is sure to hear more complaints when he goes to Capitol Hill. Lighthizer is to testify Tuesday to the Senate Finance Committee and Wednesday to the House Ways and Means Committee. Lawmakers from both political parties have been increasingly inclined to speak out against Trump’s aggressive use of tariffs.

They were especially alarmed last month when Trump unexpectedly threatened to impose crippling tariffs on Mexico in a push to stop the flow of Central American migrants into the United States. Trump dropped the tariff threat after Mexico agreed to do more to block the migrants.

But the combat with China continues. And Chinese companies are being bruised. Huawei’s founder and CEO, Ren Zhengfei, likened his company to a “badly damaged plane” because of the U.S. actions against it.

Ren said Huawei will reduce capacity and expects revenue of about $100 billion annually for the next two years, compared with $105 billion in 2018. In February, he had said the company was targeting $125 billion in 2019. Huawei’s overseas cellphone sales will drop by 40%, Ren predicted.

The Trump administration asserts that Huawei poses a national security threat because it is beholden to China’s ruling Communist Party. But American officials have presented no evidence of any Huawei equipment serving as intentional conduits for espionage by Beijing. Huawei’s placement on the Entity List is widely seen as intended to persuade resistant U.S. allies in Europe to exclude Huawei equipment from their next-generation wireless networks, known as 5G.

The action against Huawei marked an escalation in a yearlong dispute with China. Trump’s earlier tariffs largely spared American consumers by focusing on industrial goods that don’t show up directly in the mall or big-box stores. But the new round would inflict financial pain on ordinary households because it will affect many consumer goods, from cellphones and computers to shoes and silk scarves.

She added: “The president looks at all of this as a negotiation. As we have seen, sometimes these things have a way of working themselves out as they did with his tariffs on Mexico.”

If Trump does expand his tariffs to all remaining goods from China, though, it could prove costly. A report commissioned by the National Retail Federation found that American consumers would pay an additional $4.4 billion a year for clothing, $2.5 billion more for shoes and $1.6 billion more for household appliances.

More broadly, economists say the tariffs could weaken a U.S. economy that appears to be on shakier footing. Mark Zandi, chief economist at Moody’s Analytics, said the higher import taxes would leave the United States with 900,000 fewer jobs than it would have had otherwise.

“The U.S. economy will be flirting with recession later this year and early next,” Zandi said.

Jeffrey Pratt, leader of the supply chain practice at the accounting and consulting firm BDO, called the looming tariffs “a bit of gamechanger” for his clients. Many can’t afford to absorb the taxes themselves and would pass along the higher costs to their customers.

Atlas PyroVision Entertainment in Jaffrey, New Hampshire, relies on China for 90% of the fireworks it sells.

“Simply imposing a 25% tariff will ultimately cause significant harm to our family business,” CEO Stephen Pelkey said in a filing with the U.S. Trade Representative. “We would be forced to pass along the increase directly to our customers.”

Noting that community nonprofits often use the fireworks for Independence Day celebrations, Pelkey wrote: “In most cases, a 25% hike in price will force their skies to go dark on the 4th of July.”

Bracing for the new tariffs, Yedi Houseware, a Los Angeles family business, has postponed plans to hire and move into a bigger warehouse. Bobby Djavaheri, a company executive, echoed a common complaint: The administration is taxing products — in his case, things like air fryers — that aren’t made by American companies. They must be imported. So no U.S. producer benefits from the tariffs; U.S. importers just get socked with a tax.