FORT WORTH, Texas (AP) — The Latest on the fatal police shooting of a black woman inside her own home in Fort Worth (all times local):

Dozens of people crowded Fort Worth’s City Council chamber and hundreds more shouted outside to call for justice after the shooting death of Atatiana Jefferson.

The Fort Worth Star-Telegram reports about 60 people signed up to speak to the council at its Tuesday night meeting. Once the chamber’s capacity was reached, about 200 others who could not make it inside shouted bitter protests outside City Hall to Fort Worth police and political leaders.

Aaron Dean was arrested Monday night on a murder charge after he resigned as a Fort Worth police officer. Dean, who is white, shot and killed Jefferson, a black woman who was in her own home with her nephew. He is free on bond.

As the council went through its routine agenda Tuesday night, Lauren Ward stood up in the crowd more than once to tell council that she doesn’t feel safe in Fort Worth and call for city officials to resign. As the council addressed a routine zoning matter, another woman called out “Let these people speak.”

More than once, Mayor Betsy Price threatened to have people removed or adjourn the meeting altogether. 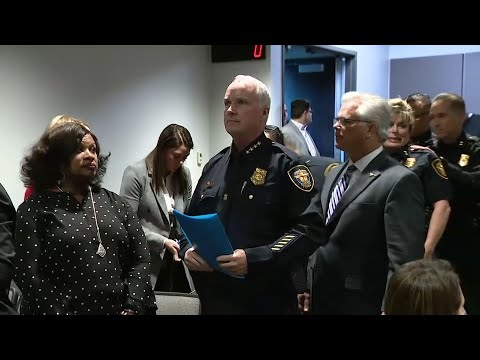 Fort Worth’s police chief reiterated that a white officer’s fatal shooting of a black woman in her home was inexcusable, as an arrest warrant was released quoting the victim’s 8-year-old nephew saying she pointed a gun at a window when they heard suspicious noises outside.

Without directly addressing the child’s account, interim Police Chief Ed Kraus said Tuesday that the victim, Atatiana Jefferson, behaved as any Texas homeowner would do if he or she heard a prowler.

Aaron Dean was arrested on a murder charge late Monday in the shooting early Saturday morning. Dean also resigned from the force Monday.

The interim Fort Worth police chief says there’s “absolutely no excuse” for a white officer’s fatal shooting of a black woman inside her home over the weekend.

At a press conference Tuesday, Chief Ed Kraus grew emotional when describing the morale of the police department. He says “officers are hurting” because of the fatal shooting and that he has not encountered an officer who disagrees with the decision to arrest Aaron Dean.

Kraus pleaded with Fort Worth residents to not let the actions of one officer reflect on all employees of the Fort Worth Police Department.

Kraus says Dean did not make a statement to investigators before resigning Monday.

Dean was arrested Monday night on a murder charge in the shooting death of Atatiana Jefferson. He is out of custody after posting bond.

The white Fort Worth, Texas, police officer who resigned after fatally shooting a black woman inside her home is out of jail after posting bond.

Aaron Dean was arrested at about 6 p.m. Monday on a murder charge for Saturday’s killing of 28-year-old Atatiana Jefferson. Jail records show he was out of custody after posting bond Monday night, less than four hours after his arrest.

Earlier in the day, Dean resigned from the force, and Fort Worth’s interim police chief said he would have been fired if he hadn’t.

Police say Jefferson was killed by shot fired through a window as police responded to a report of an open door.

Fort Worth police are telling a grieving public that “we feel and understand your anger,” after a white officer was charged with murder for shooting a black woman through a window of her home.

Aaron Dean was jailed Monday evening on $200,000 bond. He also resigned from the police department, and the chief said he would have been fired if he didn’t quit.

Atatiana Jefferson was shot to death Saturday by Dean, who was responding to a report of an open door.

Sgt. Chris Daniels read a statement Monday night after Dean’s arrest in which he pledged that the department’s major case and internal affairs units would ensure “no stone is left unturned” in the search for answers.

Earlier, an attorney for Jefferson’s family asked why Dean wasn’t in handcuffs.