US and India pledge cooperation as domestic crises play out

WASHINGTON (AP) — The United States and India agreed on Wednesday to expand defense, science and technology cooperation as Secretary of State Mike Pompeo said impeachment would not distract the Trump administration on national security matters

Pompeo and Defense Secretary Mark Esper met their Indian counterparts for security talks at the State Department as the House debated impeachment charges against President Donald Trump. The House voted later Wednesday to impeach the president, setting up a Senate trial.

Pompeo said “the noise and silliness” in Washington would not affect the administration’s focus on U.S. national security.

The U.S. and India are each dealing with domestic political crises: the U.S. with impeachment, India with widespread protests and violent clashes in India over a new citizenship law.

“The world should know that despite all the noise, the chaos, the media asking questions that are completely unrelated to the reason we are here today, that the leaders of our two nations are working diligently to protect the American people, to develop a relationship that’s important strategically for the coming decades between the United States and India,” Pompeo said. 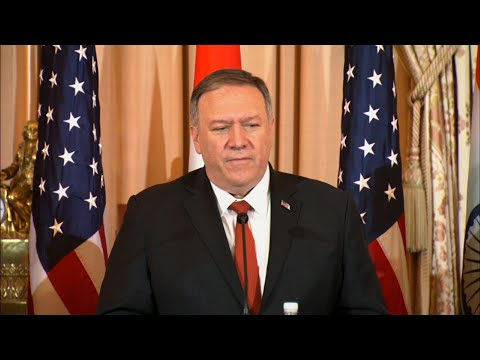 “We won’t let the noise and the silliness in Washington, D.C., distract us from that,” he said at a news conference with Esper, Indian Foreign Minister Subrahmanyam Jaishankar and Indian Defense Minister Rajnath Singh.

Asked whether he would participate as a witness in a Senate trial if the House impeached Trump, Pompeo said he would produce State Department documents and testify if the requests were “appropriate and required by law.”

Democrats have complained that Pompeo’s previous responses have been disingenuous because the department has not produced any documents in response to impeachment investigators’ requests. Department officials did testify before the impeachment inquiry but only over the administration’s objections and under subpoena.

“My participation will continue to be precisely that which the law requires,” Pompeo said.

Pompeo’s comments were the only remarks related to the impeachment and came after the meetings ended.

During the talks, the four men said they had agreed to improve defense cooperation, primarily through increasing troop levels during joint military exercises and promoting the capacity of India’s smaller neighbors to participate in U.N. peacekeeping operations.

The two sides also discussed China’s growing global footprint, a matter that is of particular concern for both the U.S. and India, and challenges on the Indian subcontinent, notably the rivalry between India and Pakistan.

As the Trump administration grapples with impeachment, India’s government is dealing with protests over a new law that grants citizenship on the basis of religion and has drawn deep opposition. It provides a path to citizenship for Hindus, Buddhists, Christians and other religious minorities who are in India illegally but can demonstrate religious persecution in Muslim-majority Bangladesh, Pakistan and Afghanistan. It does not apply to Muslims.

The Trump administration has spoken out forcefully against repression of Muslims and other religious minorities in China and Myanmar, but has remained relatively silent on India’s proposed law, which Jaishankar defended as a humanitarian gesture. Pompeo demurred when asked how or whether the U.S. would respond to the enforcement of the law.

“We care deeply and always will about protecting minorities, protecting religious rights everywhere,” he said. “We honor Indian democracy as they have a robust debate inside of India about (this) issue. The United States will be consistent in the way that we respond to these issues, not only in India but all around the world.”

Jaishankar rejected the suggestion that the law is intended to discriminate against Muslims. he said it was aimed at helping the most vulnerable minorities.

“It is a measure which is designed to address the needs of persecuted religious minorities from certain countries,” he said. “If you look at what those countries are and therefore what those minorities are, you would understand why certain religions were identified.”