VIRGINIA BEACH, Va. (AP) — The Virginia Beach employee who shot and killed 12 people at a municipal building gave no hint of the massacre to come when he emailed his resignation letter earlier in the day, saying that he was leaving for “personal reasons” but that “it has been a pleasure to serve.”

The gunman’s two-sentence emailed resignation letter — released by city officials Monday, three days after the shooting — put authorities, the community and victims’ families no closer to understanding why the engineer with 15 years on the job would go on a rampage at work.

Investigators seem stymied. There are no indications the 40-year-old Craddock left notes, manifestos, social media screeds or any other obvious signs of what motivated him.

Craddock’s resignation email gave his two weeks’ notice but no clues that he was unhappy at work or held a grudge against anyone. Because the email is partially redacted, it’s unclear how long before the shooting it was sent. Officials wouldn’t say why they redacted it, and they declined to give an update on the investigation Monday.

Craddock’s email reads: “I want to officially put in my (2) weeks’ notice to vacant my position of Engineer III with the City of Virginia Beach. It has been a pleasure to serve the City, but due to personal reasons I must relieve my position.” 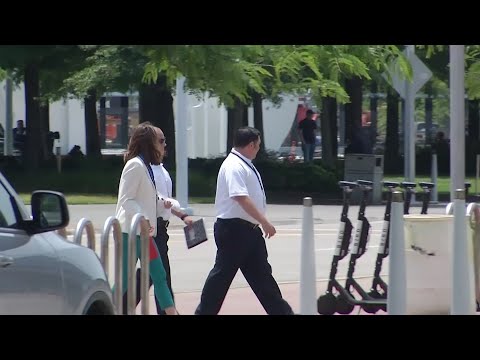 Sometime later that day, police say, Craddock went from floor to floor of the building, firing from two .45-caliber pistols, killing 11 of his co-workers and a building contractor he encountered in the parking lot. He was killed in a gunbattle with police.

Police Chief James Cervera has said investigators are retracing the gunman’s activities on the day of the attack, using his electronic keycard to track his movements through secure areas of the building. They are also reviewing his personal and professional lives.

“Right now we do not have anything glaring,” Cervera said Sunday. “There’s nothing that hits you right between the eyes. But we are working on it.”

Officials also have said there’s no indication Craddock targeted anyone specifically; shortly after the shooting, Cervera described him as firing “indiscriminately.”

Cervera has described a chaotic scene as officers entered the building and pursued the assailant through a tightly packed warren of offices that the chief likened to a maze or a honeycomb. They exchanged fire in a protracted gunbattle. Cervera said he did not know how many rounds were fired but called it “well into the double digits.” Craddock was shot and taken by ambulance to the hospital, where he died.

Craddock appeared to have had no felony record, making him eligible to purchase guns. Government investigators identified two .45-caliber pistols used in the attack, and all indicators were that he purchased them legally in 2016 and 2018, said Ashan Benedict, the regional special agent for the Bureau of Alcohol, Tobacco and Firearms. The police chief said at least one had a noise suppressor.

James Alan Fox, a criminologist at Boston’s Northeastern University, said finding the motive in mass shootings is sometimes impossible, noting the FBI was never able to pin down exactly what drove a gunman to kill 58 country music fans in Las Vegas in 2017. And while knowing the reason may offer the public a sense of closure, he said, it doesn’t necessarily help in preventing future shootings.

“There are countless Americans who are angry, who don’t have lots of close friends, who are socially isolated, who are frustrated, who own guns and admire killers in the past who got even,” Fox said. “But few may pick up a gun and shoot people.”