FREEPORT, Bahamas (AP) — Government officials urged hundreds of people to evacuate their homes on low-lying cays in the northwestern Bahamas and opened shelters on Saturday as Hurricane Dorian barreled toward the archipelago as a menacing Category 4 storm.

The strengthening storm was expected to approach Saturday and then move over or near the area Sunday as it followed a path likely to take it on to Florida’s east coast.

“It could have disastrous results for the island of Grand Bahama,” said Kwasi Thompson, minister of state in this island nation.

Shelters being set up in churches and schools would begin opening around 8 a.m. Saturday, authorities said.

Schools and government offices remained closed across the Bahamas as the government warned that Grand Bahama and the Abaco Islands probably would get the worst of the storm. Officials said between 2,000 and 3,000 people living on tiny cays in the Abaco Islands should evacuate and warned that those who did not were putting their lives at risk and endangering rescue crews. 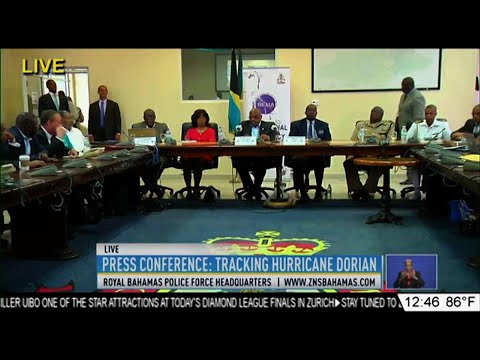 The sounds of hammers and cash registers echoed across the Bahamas as the archipelago that lies just southeast of Florida rushed to prepare for Hurricane Dorian.

“We cannot emphasize enough that they need to get out,” said Abaco Island Administrator Maxine Duncombe.

Deputy Prime Minister Peter Turnquest urged everyone to remain indoors once the storm began closing in. “This is not the time for WhatsApp news reporters,” he said.

Long lines snaked from some gas stations and grocery stores on Grand Bahama on Friday as people stocked up on water and canned food, leading to empty shelves in some locations.

Cassandra Hepburn, one resident, said everyone was rushing to make their final preparations.

“You’re never really ready for a hurricane, but God is in control, so we’ll do the best we can,” she said.

“We are a resilient nation,” he said.