The governor ordered bars, gyms and movie theaters to close and limited restaurants to delivery and takeout.

The number of positive tests for the virus in Louisiana reached 136 by Monday afternoon, according to the state health department’s latest figures.

Most of those newly testing positive were in New Orleans but there were cases in the northwest corner of the state and a new case in Ascension Parish near Baton Rouge — the first in the area of the state capital. Before that was announced, state legislators had already agreed to temporarily suspend their lawmaking session.

Edwards said the latest death from COVID-19, the disease caused by the virus, was a resident of Lambeth House, a retirement home in New Orleans — where several other residents have tested positive.

The Democratic governor said the new restrictions take effect Tuesday and will last until April 13. Casinos also will shutter, and public gatherings of 50 people or more will be banned. No one will be allowed to eat onsite at a restaurant. Edwards warned the situation will be reevaluated before business operations can resume as normal, to determine whether restrictions should be continued. 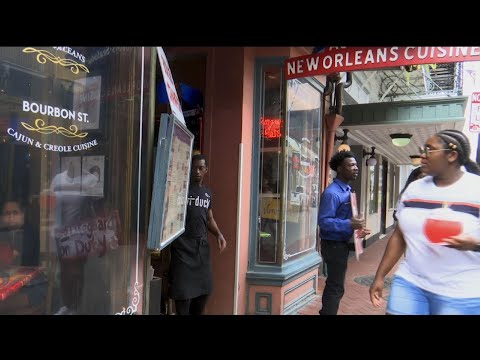 “What we’re learning is that it can take two weeks for symptoms to appear. We believe we are still unearthing community spread that’s been around for the past several weeks, which means it is a statewide problem that requires statewide solutions,” the governor said in a statement.

At a news conference, Edwards emphasized the actions are aimed at slowing the spread of the virus to avoid strain on the health care system. “We are at risk for exceeding the ability we have to deliver health care if we don’t slow the transmission,” he said.

Republican U.S. Sen. Bill Cassidy, a doctor, said Louisiana has the third-fastest infection rate in the country and the confirmed cases don’t reflect the number of infections. He called on his state’s residents to heed the warnings of officials: “This is the only way to minimize the number of lives lost. We must work together.”

In hopes of slowing the spread of the virus across Louisiana, Edwards last week closed K-12 schools and delayed the state’s presidential primaries. His actions are mirroring similar decisions by governors in other states. Louisiana’s Supreme Court on Monday ordered a delay until at least March 30 for all jury trials that haven’t yet started and postponements of some other court proceedings. Other state and federal courts also were announcing various restrictions or suspensions of activities.

For most people, coronavirus causes only mild or moderate symptoms, such as fever and cough. For some, especially older adults and people with existing health problems, it can cause more severe illness, including pneumonia.

The vast majority of people recover from the new virus. People with mild illness recover in about two weeks, while those with more severe illness may take three to six weeks to recover, according to the World Health Organization.

The Louisiana Legislature initially planned to continue its work in the second week of a three-month legislative session, but that prompted an outcry about the public health risk of hundreds gathered in the state Capitol building. By Monday afternoon, the House and Senate voted nearly unanimously to adjourn until March 31.

“With every decision we make, we are balancing the health and welfare of our citizens, staff, and legislators with our constitutional responsibilities,” Senate President Page Cortez, a Lafayette Republican, said in a statement.

In New Orleans, Mayor LaToya Cantrell called on people to keep even family gatherings to a reasonable size. She urged internet providers to find a way to get wireless internet to everyone across the city, to help people who need to access the internet — such as students needing access lesson plans while schools are shuttered.

Dr. Jennifer Avegno, leader of the city health department, stressed that the virus was spreading much faster in New Orleans than in other U.S. cities.

“This is a rapidly changing situation,” she said. “There is substantial community spread.”

Meanwhile, state offices that handle food stamps, welfare payments and other social services were closed to the public in the Orleans Parish area. State agencies encouraged people to do their business by phone or online. The revenue department urged people to file their taxes and make payments online.

Because of the cluster of cases in New Orleans, at least one Baton Rouge hospital, Our Lady of the Lake, announced that no one who has visited New Orleans or neighboring Jefferson Parish in the last 14 days will be allowed to enter the facility.

Legislators agreed to suspend their session after a list of advocacy groups urged the delay. New Orleans state Sen. Karen Carter Peterson, the head of the Louisiana Democratic Party, described it as irresponsible for the session to continue.

“Tired of explaining to people who should be paying attention and looking out for the masses why we shouldn’t be convening on non urgent matters,” Peterson posted on Twitter. After the suspension announcement, she tweeted: “Thank goodness.”