Biden gets more aggressive as 2020 campaign heats back up

PHILADELPHIA (AP) — Joe Biden is adopting an increasingly aggressive stance as he looks to break out of a monthslong campaign freeze imposed by the coronavirus outbreak.

Over the course of 24 hours, the presumptive Democratic nominee sharpened his rhetoric against President Donald Trump, warning he could try to steal the election. His campaign organized a petition pressing Facebook to boost its efforts to prevent the spread of misinformation. And he released a plan to restart an economy slammed by the coronavirus in a way that he says won’t make Americans choose between their health and livelihoods.

The quick succession of developments signals Biden’s growing desire to become more assertive. He’s betting that he can build momentum by offering a contrast to Trump’s leadership as the country is gripped by the pandemic, economic turmoil and unrest stemming from racial injustice and police brutality.

“Trump has basically had a one-point plan: Open businesses,” Biden said Thursday at an economic roundtable in Philadelphia, where he announced a plan to reopen the economy. “It does nothing to keep workers safe, to keep businesses able to stay open, and secondly it does very little to increase consumer confidence.”

If elected, Biden promised to guarantee testing and protective equipment for people called back to work, while prohibiting discrimination against elderly Americans and others at high risk of contracting the virus. He also wants to use federal funds to ensure paid leave for anyone who falls ill or cares for those who do. 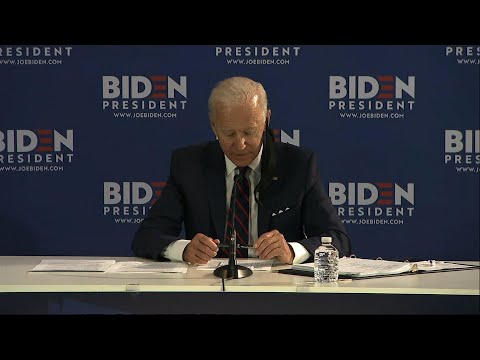 He proposed a national contact tracing workforce or “job corps” of at least 100,000 to call people who test positive, track down their contacts and get them into quarantine. That figure aligns with an estimate from the Johns Hopkins Center for Health Security and the Association of State and Territorial Health Officials. Health experts agree that contact tracing is crucial to slowing the spread of the virus and that there aren’t enough public health workers today to achieve what’s needed.

Biden also pledged a “Nationwide Pandemic Dashboard,” where Americans could check the virus’ spreading by zip code. Josh Michaud, associate director of global health policy with the Kaiser Family Foundation in Washington, said it remains unclear “if that information would be timely and accurate enough to reflect true levels of risk in a way that would be helpful to individuals, businesses and institutions in each community.”

Still, “It might be helpful to have such information to better target resources and identify the most at risk communities on a more fine grain level,” Michaud said. “As we have seen done in a few places like different New York City boroughs.”

Biden backed more funding for schools and child care centers as they reopen and the creation of a “safe shopper” program meant to make returning consumers less wary of getting sick.

He referenced the potentially eye-popping price tag of all that, joking, “There goes that big spending Democrat again” but added, “If we don’t do this, we’re going to be in deep, deep, deeper trouble economically.”

As the plan was being released, his campaign circulated an online petition urging Facebook to strengthen its misinformation rules. Social media giant Twitter has already drawn Trump’s ire by imposing stricter limits on how he and others use the social media network.

“We’re sending Facebook a letter demanding that the company change its policies to crack down on misinformation in ads and ensure a fair election,” the petition reads. Facebook responded that “the people’s elected representatives should set the rules, and we will follow them.

“There is an election coming in November and we will protect political speech,” the company said in a statement “even when we strongly disagree with it.”

As his campaign strikes at Facebook, Biden is also dramatically increasing spending on the platform. It outlaid millions of dollars on ads that are themed around the protests sweeping the country and Trump’s response to them.

After remaining at home for months, Biden has begun holding public events within driving distance of his house in Delaware. But his more aggressive approach has so far not extended to resuming large campaign rallies.

That is in contrast to Trump, who flew to Dallas on Thursday for a $10 million fundraiser and says he’ll begin holding a series of rallies starting next week in Oklahoma. Biden’s campaign says it will resume normal campaign travel and events when public health officials and authorities say it’s safe.

Melissa Reed, a spokesperson for Trump Victory in Pennsylvania, said voters “don’t want to return to the stagnant economic growth under the Obama-Biden Administration, they want a Great American Comeback under President Trump.” The president’s reelection campaign also criticized Biden for offering a plan to jump start the economy “six weeks too late.”

“My single greatest concern: This president’s going to try and steal this election,” Biden said on “The Daily Show with Trevor Noah,” which aired Wednesday night. “This is a guy who said all mail-in ballots are fraudulent, voting by mail, while he sits behind the desk in the Oval Office and writes his mail-in ballot to vote in the primary.”

Biden said he’d considered what would happen if Trump refused to vacate the presidency in the event he wasn’t reelected, before suggesting that the military could step in to ensure a peaceful transition of power.

“I am absolutely convinced they will escort him from the White House with great dispatch,” he said.

Trump argues that absentee voting, which many states are expanding to avoid large crowds at polling places during the coronavirus outbreak, increases the possibility of fraud. There is little evidence to support that assertion, and Trump himself has voted by mail in the past.

Still, a chaotic Tuesday primary in Georgia may foreshadow a messy November election. Biden said on the “Daily Show” that his campaign would hire lawyers to observe balloting in “every district in the country.”