PARADISE, Calif. (AP) — The Latest on wildfires in California (all times local):

Authorities have lifted mandatory evacuation orders for the Los Angeles neighborhood threatened by an enormous wildfire. But thousands of homes remain at risk.

Fire officials announced Monday night that the evacuation order for a portion of West Hills in the northwestern San Fernando Valley has been lifted.

The Woolsey fire that began last week has killed two people and burned at least 435 buildings, most of them homes.

Authorities picking their way through burned-out neighborhoods say a Southern California wildfire has now destroyed at least 435 buildings, most of them homes.

The new figures released Monday evening come as a wildfire continues to burn its way through scenic but drought-stricken canyonlands in and around Malibu, where celebrity homes have burned along with modest mobile homes.

Fire officials say the immense fire, which stretches from north of Los Angeles to the Pacific Ocean, is only 30 percent contained — although that is significant progress from only a few days earlier. 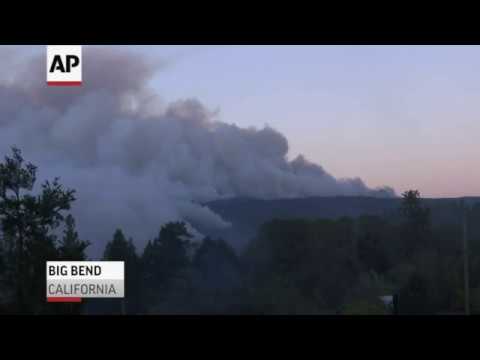 Thousands of homes are still at risk, and forecasters expect gusty Santa Ana winds that drove the flames to continue into Wednesday.

Authorities have reported 13 more fatalities from a blaze in Northern California that destroyed a town, bringing the total death toll so far to 42 and making it the deadliest wildfire in recorded state history.

The dead have been found in burned-out cars, in the smoldering ruins of their homes, or next to their vehicles, apparently overcome by smoke and flames before they could jump in behind the wheel and escape.

In some cases, there were only charred fragments of bone, so small that coroner’s investigators used a wire basket to sift and sort them. The search for bodies was continuing.

Hundreds of people were unaccounted for by the sheriff’s reckoning, four days after the fire swept over the town of 27,000 with flames so fierce that authorities brought in a mobile DNA lab and forensic anthropologists to help identify the dead.

The statewide death toll from wildfires over the past week has reached 44.

President Donald Trump says he has approved an “expedited” major disaster declaration for California over the deadly wildfires burning at both ends of the state.

Trump tweeted Monday night that he “wanted to respond quickly in order to alleviate some of the incredible suffering going on.”

Democratic Gov. Jerry Brown had requested the declaration, which would make victims eligible for crisis counseling, housing and unemployment help, and legal aid.

More than 30 people have been confirmed dead in the wildfires. Most of the deaths have come from the fire that obliterated the Northern California town of Paradise.

A Northern California man who led a caravan of vehicles that was overcome by flames from a wildfire says he saw his friend die.

Greg Woodcox told The Associated Press Monday that he heard his friend scream as the heat blew out windows. Four other people in the vehicles died.

They were among at least 29 people who have lost their lives in a wildfire that decimated the town of Paradise.

Woodcox said he was too exhausted to talk more by phone.

In an interview with the San Francisco Chronicle, the 58-year-old Woodcox said he was in a Jeep ahead of the other vehicles and ran when the flames overtook them.

He said he followed a fox to a path down a steep embankment, and he survived by submerging himself in a stream for nearly an hour.

A newspaper says firefighters and state employees are clearing brush and spreading water to prevent damage to a Northern California reservoir and dam if a wildfire passes through.

The San Francisco Chronicle reports that the work was underway Monday at Lake Oroville while the fire is still about 10 miles from the reservoir’s power plants and water-supply facilities.

State Department of Water Resources spokeswoman Erin Mellon said officials were closely monitoring the blaze. The fire has killed at least 29 people and destroyed the town of Paradise.

Spillways at the 770-foot Oroville Dam crumbled and fell away during heavy rains in early 2017, prompting thousands to flee over fears of a possible catastrophic release of water.

A woman who owns property near the location where a deadly wildfire started in Northern California says she got an email from utility Pacific Gas & Electric Co. last week. It said crews needed to come on her property because their transmission system was causing sparks.

It’s still not clear what caused the massive fire that has killed 29 people. PG&E said Thursday it experienced a problem on an electrical transmission line near the site of the massive fire, minutes before the blaze broke out.

It started in the area of 64 acres of land in Pulga, California, owned by Betsy Ann Cowley.

She said she had received an email on Wednesday, the day before the fire started, saying that crews needed to come to her property.

Cowley said the email said crews were coming to work on the high-power lines because “they were having problems with sparks.”

PG&E declined to discuss the email when contacted by The Associated Press.

California fire investigators were at Cowley’s property on Monday.

Fire officials in Northern California say firefighters are battling two spot fires south of the town leveled by a blaze that has killed at least 29 people.

The area near Paradise is expected to see wind gusts as high as 40 mph (64 kmph) by Monday evening.

Smith says firefighters are working to build a contingency line to stop the fire from reaching Oroville, a town of 19,000 people.

Osby also emphasized Monday that about 57,000 homes have been saved from the so-called Woolsey fire, which burned along a path about 20 miles (32 kilometers) long and 14 miles (22.5 kilometers) wide.

Residents have been allowed to return home in some areas, but Osby says at least 200,000 people remain evacuated.

The cause of the fire remains under investigation. Osby says nothing has been ruled out.

A utility is facing increasing criticism following a deadly blaze that leveled a Northern California town and killed at least 29 people.

Pacific Gas & Electric Co. told state regulators last week it detected a problem on an electrical transmission line near the town of Paradise minutes before the fire broke out Thursday.

Paradise resident Jim Flint tells television stations KHSL/KNVN in the nearby city of Chico he was kicked out of a community meeting Sunday night after asking a PG&E executive if the company was responsible for the deadly fire.

Flint says he has lived in Paradise for 29 years and the threat of a wildfire has always been there but says “the issue has been electrical power lines.”

He adds that “we need answers from these people.”

The fire has destroyed more than 6,000 homes. A cause has not been determined.

Barbara Hall has been calling shelters and the sheriff’s office hoping to find out whether her aunt, Arlene and her husband Paul Bickel made it out of their home in a retirement community in the town of Paradise, where a massive fire killed at least 29 people.

So far, Hall has had no luck. Her relatives are in their 80s and 90s and Hall isn’t allowed into Paradise to see if their car is in front of a house that may no longer be standing.

Hall asks: “Did they make it in their car? Did they get away? Did their car go over the edge of a mountain somewhere? I just don’t know.”

Hall was making phone with her daughter’s mobile phone from nearby Redding, where her daughter lives.

The couple only had a landline, which had phone numbers programmed into it, and calls to it don’t go through.

Hall says her aunt’s parents adopted her father when he was a boy and that she is like a big sister to her.

Officials say the fires Monday morning west of Los Angeles in the Rocky Peak and Thousand Oaks areas show that the risk of more fires breaking out is high.

Ventura County Fire Chief Mark Lorenzen says the Rocky Peak fire is about 20 acres (8 hectares) and has forced the shutdown of the State Route 118 freeway.

The blaze is being bombarded with water drops and ground crews are on the scene.

That fire started not far from where the region’s huge Woolsey fire began last Thursday.

The new Thousand Oaks fire is about 15 acres (6 hectares) and Lorenzen believes it will be contained quickly.

Authorities have more than doubled their estimates of buildings destroyed in Southern California’s huge wildfire.

Officials said Monday that an estimated 370 structures burned and that only 15 percent of their damage estimate has been completed.

They said over the weekend that 177 buildings had burned amid predictions that the number would grow higher with new damage assessments.

The size of the fire has also increased to more than 143 square miles (370 square kilometers) and was 20 percent contained Monday morning.

The fire erupted last Thursday as gusty, dry Santa Ana winds and spread rapidly through communities stretching from northwest of Los Angeles to the Malibu coast.

California fire officials say a blaze in Northern California that wiped out a town and killed at least 29 people grew slightly overnight and that strong winds that could fan flames are again expected in the area by Monday afternoon.

Fire behavior specialist at Cal Fire Jonathan Pangburn says the blaze was active all night long and jumped 300-feet (90-meters) across a portion of Lake Oroville at least three times.

Officials say more than 4,500 firefighters are on day four of their battle against the blaze.

After a lull of strong winds that make for dangerous fire conditions, the area near Paradise will have wind gusts as high as 40 mph (64 kmph) by Monday evening.

Some of the thousands of people forced from several communities by the huge Southern California wildfire are being allowed to return to their homes.

The positive developments come even though Monday’s forecast calls for continuing critical fire danger due to gusty Santa Ana winds and extremely low humidity levels. Those conditions are expected to last through Tuesday and possibly into Wednesday.

As of Sunday night, the fire had grown to more than 133 square miles (344 square kilometers) and it was 15 percent contained.

During the weekend authorities reported 177 buildings had burned but said they expect that number to grow when new damage assessments are announced Monday.

At least 31 people are dead in wildfires across California. Twenty-nine people have now been confirmed dead and another 228 are unaccounted for in a Northern California blaze alone.

Ten search teams were working in the town of Paradise that was largely incinerated last week and in surrounding communities in the Sierra Nevada foothills. Authorities called in a DNA lab and teams of anthropologists to help identify victims.

Statewide, 150,000 remained displaced as more than 8,000 fire crews battled wildfires that have scorched 400 square miles (1,040 square kilometers), with out-of-state crews continuing to arrive. Fire officials are warning that whipping winds and tinder-dry conditions threaten more areas through the rest of the week.

Gov. Jerry Brown has declared a state of emergency and said California is requesting aid from the Trump administration. President Donald Trump has blamed “poor” forest management for the fires. Brown said federal and state governments must do more forest management but that climate change is the greater source of the problem.