The Latest: Beshear urges unity after his rival’s concession

FRANKFORT, Ky. (AP) — The Latest on the Kentucky governor’s race (all times local):

Gov.-elect Andy Beshear says it’s time for Kentuckians to come together now that his tough race against Republican Gov. Matt Bevin has concluded.

Beshear thanked Bevin for his promise to ensure a smooth transition after the incumbent governor conceded to his archrival Thursday.

The Democratic governor-elect spoke at the headquarters of the Kentucky Education Association. Beshear received strong campaign support from teachers, who rallied against pension and education proposals backed by Bevin.

Bevin made the dramatic announcement Thursday at the state Capitol on the same day election officials across Kentucky double-checked vote totals.

Last week’s election results showed Bevin trailing Beshear by more than 5,000 votes of more than 1.4 million cast, for a lead of less than 0.4 percentage points.

Bevin tried to nationalize his race for reelection, touting his close ties to President Donald Trump. Beshear kept his focus on state issues like education, health care and pensions. 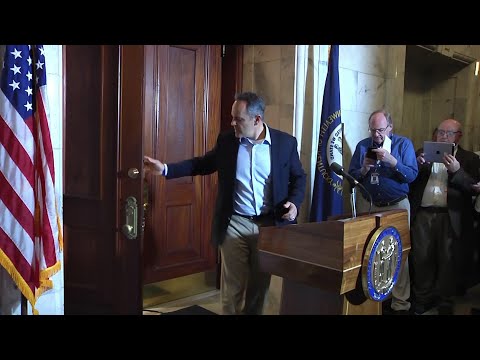 Bevin faced a growing chorus of state Republicans urging him to accept the results of the recanvass unless he can point to evidence of substantial voter fraud. Beshear had already declared victory and has been preparing to become governor in December.

Bevin has refused to concede last week’s election and requested Thursday’s recanvass. He acknowledges it’s highly unlikely the outcome will change after checking to ensure results were tallied correctly.

Bevin’s options after that include contesting the election, which could put the outcome in the hands of state lawmakers

Beshear, the state attorney general, has declared victory and begun preparing to become governor next month.

The Associated Press hasn’t declared a winner, in keeping with its policy not to call races close enough to go to a recount. Although Kentucky’s recount law doesn’t apply to a governor’s election, the AP is applying that same standard here.