BUENOS AIRES, Argentina (AP) — The Latest on President Donald Trump at the Group of 20 summit (all times local):

Speaking to reporters aboard Air Force One, Trump says lawmakers have asked him for an extension after Bush’s death late Friday. The 41st president is set to be honored with a state funeral, including plans to lie in state in the Capitol this week, a ceremony at the National Cathedral and a national day of mourning Wednesday.

Trump says: “I would absolutely consider it and probably get it.”

Trump had been gearing up for a showdown at the end of the week as he’s sought billions for the construction of a wall along the U.S.-Mexico border.

President Donald Trump says his next meeting with North Korea’s Kim Jong Un is likely to happen in January or February.

The president tells reporters that there are three sites under consideration, but he’s not identifying them.

Trump, speaking aboard Air Force One on his return from Argentina, tells reporters that he and Kim are “getting along very well” and have a “good relationship.”

He adds that at some point he’d like to invite Kim to the United States.

Negotiations between the U.S. and North Korea on ending its nuclear program have appeared to stall in the months since Trump and Kim held a historic summit in Singapore in June.

The two leaders made a vague commitment on “denuclearization” of the Korean Peninsula during the summit, but glossed over how to make it happen. 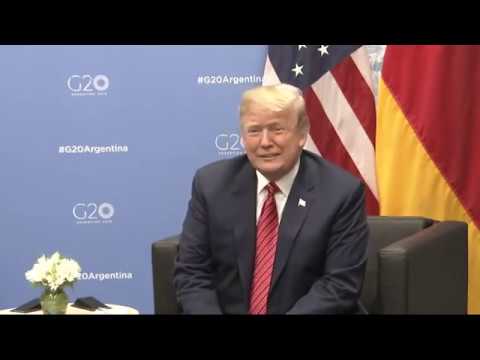 President Donald Trump says he will shortly be providing formal notice to Congress that he will terminate the North American Free Trade Agreement, giving lawmakers six months to approve the replacement he recently signed.

Speaking to reporters aboard Air Force One while returning to Washington from Argentina, Trump says: “I will be formally terminating NAFTA shortly.”

Seeking to gain leverage with skeptical lawmakers to approve the revised trade pact, Trump says Congress “will have a choice” as it considers the agreement he signed with the leaders of Mexico and Canada on Friday during the Group of 20 summit.

He says they can choose between the United States-Mexico-Canada Agreement or “pre-NAFTA, which works very well.”

Trump has made renegotiating NAFTA a centerpiece of his presidency.

The White House says China’s government is “open to approving” the purchase of Dutch semiconductor manufacturer NXP by American chipmaker Qualcomm should it be revived.

China’s decision earlier this year came amid a period of heightening tensions between the U.S. and China over trade and intellectual property issues.

Qualcomm announced it was dropping plans to proceed with the deal after it failed to receive Chinese government approval. It is unclear whether the transaction could be revived.

China has agreed to label fentanyl a controlled substance after a meeting between President Donald Trump and Chinese President Xi Jinping. The deadly synthetic opioid is responsible for tens of thousands of U.S. drug deaths annually.

The White House says Xi agreed to the move, long sought by the U.S., during a dinner Saturday between the two leaders on the margins of the Group of 20 summit in Buenos Aires, Argentina.

U.S. officials for years have been pressing the Chinese government to take a tougher stance against fentanyl, which is 50 times more powerful than heroin. Most U.S. supply of the drug is manufactured in China.

White House press secretary Sarah Sanders says the decision means that “people selling fentanyl to the United States will be subject to China’s maximum penalty under the law.”

The two met for dinner in Buenos Aires, Argentina, on Saturday as they sought to de-escalate a trade war.

Press secretary Sarah Sanders says Trump has agreed not to raise U.S. tariffs on Chinese imports as scheduled on Jan. 1. She added that the two countries will “immediately begin negotiations on structural changes” around intellectual property protections, cybertheft and other U.S. priorities.

Tariffs on $200 billion in Chinese goods were set to rise from 10 percent to 25 percent in the new year, and Trump was considering duties on even more Chinese goods.

The White House says if the two sides don’t reach agreement within 90 days, then Trump will impose the tariffs.

President Donald Trump has wrapped up his time at a summit for world leaders with more than two hours of talks with Chinese President Xi Jinping.

The two are trying to tamp down tensions surrounding a U.S.-China trade war.

Top economic adviser Larry Kudlow told reporters after the meeting that it went “very well,” but no other details have been released.

During two days at the Group of 20 summit of rich and developing nations held in Argentina, Trump met one on one with the leaders of Germany, Turkey, South Korea, Australia, Japan and the host country of Argentina.

He canceled a meeting with Russian President Vladimir Putin over Moscow’s seizure of Ukrainian ships. He also canceled a wrap-up news conference out of respect to former President George H. W. Bush, who died Friday.

President Donald Trump is meeting with Chinese President Xi Jinping as the countries look for ways to ease an escalating trade war.

Trump suggested to reporters just before the sit-down that at “some point” it could yield “something that will be good for China and good for the United States.” He didn’t elaborate.

Trump and Xi were set to talk over dinner Saturday at a summit of world leaders in Argentina.

The two are trying to negotiate the end to a trade conflict that is rattling financial markets and threatening the world economy. Both sides have raised tariffs on billions of dollars of each country’s goods.

Trump said they would also discuss the opioid crisis. He said he hopes China will criminalize fentanyl, the synthetic form of opioids largely shipped from China.

President Donald Trump and the other leaders signed the document at the end of a two-day summit of rich and developing nations held in Argentina.

The U.S. supported the language on the WTO but did not sign on to a commitment to support the Paris Climate Accord, which Trump is exiting.

All the other countries agreed to support the statement.

The White House official, who was not authorized to speak publicly, also noted language on workforce development and women’s economic development and said China committed to doing infrastructure financing on “transparent terms.”

President Donald Trump is meeting with Turkish President Recep Tayyip Erdogan amid a global outcry over the death of a U.S.-based columnist who was killed at the Saudi Consulate in Istanbul.

Erdogan has sought to keep international pressure on Saudi Arabia over the slaying in October of Jamal Khashoggi. Trump has said there is no definitive evidence that Saudi Arabia’s crown prince is complicit in the killing. He says the kingdom is an important ally that has helped keep oil prices low.

U.S. intelligence agencies have concluded that the crown prince must have at least known about the plot to kill Khashoggi.

The two leaders are meeting at the Group of 20 rich and developing nations in Buenos Aires, Argentina. The meeting is closed to reporters.

That’s according to White House press secretary Sarah Huckabee Sanders, who says the chat occurred during the dinner program at the Group of 20 summit in Buenos Aires, Argentina.

Sanders says that as is typical at multilateral events, the president and first lady had several informal conversations with world leaders at the dinner, including Putin.

Trump and Putin were supposed to have a formal bilateral meeting Saturday at the summit, but Trump called it off Thursday amid spiking tensions over Russia’s seizure of three Ukrainian naval vessels and their crews last weekend.

President Donald Trump is talking trade and other hot-button international issues with German Chancellor Angela Merkel — a leader he says is “highly respected by everybody, including me.”

They are meeting during the Group of 20 summit of rich and developing nations being held in Argentina.

Trump and Merkel will discuss trade, the conflict between Ukraine and Russia, and Moscow’s violations of a landmark nuclear arms treaty that Trump plans to exit.

Many in Europe have looked to Merkel as Trump has called into question traditional trans-Atlantic ties with his announcements of trade tariffs, repeated criticism of European contributions to NATO and other issues. Merkel has walked a fine line, criticizing some of Trump’s decisions while emphasizing that a good relationship with Washington is central to her government.

President Donald Trump says he expressed his “best wishes” to the Bush family after the death of former President George H.W. Bush.

Trump says he spoke with former President George W. Bush and former Florida Gov. Jeb Bush on Saturday. He praised the elder Bush, who died Friday, as “a high-quality man who truly loved his family.”

He added that Bush’s death “really puts a damper” on his participation at the international Group of 20 summit in Buenos Aires, Argentina.

Earlier Saturday, Trump cancelled a scheduled summit news conference out of respect for the Bush family. Trump has publicly sparred with the political dynasty, clashing on style and substance.

Trump commented while meeting with German Chancellor Angela Merkel, who praised the late Bush one of the fathers of German reunification.

In a proclamation signed Saturday, hours after Bush died, Trump has also designated Wednesday as a national day of mourning. Trump encourages Americans to gather in places of worship “to pay homage” to Bush’s memory.

He adds: “I invite the people of the world who share our grief to join us in this solemn observance.”

Trump hails Bush as “one of America’s greatest points of light,” a reference to one of Bush’s signature phrases about American civic culture.

Trump has mocked the “points of light” phrase, saying at campaign rallies that “I never quite got that one.”

President Donald Trump is cancelling a planned news conference at the Group of 20 summit in Argentina Saturday, “out of respect for the Bush Family” after death of former President George H.W. Bush.

In a tweet, Trump says he was “very much looking forward” to speaking with the news media before leaving the summit in Buenos Aires “because we have had such great success in our dealing with various countries and their leaders at the G20.”

He adds: “However, out of respect for the Bush Family and former President George H.W. Bush we will wait until after the funeral to have a press conference.”

When President Donald Trump sits down for dinner Saturday with Chinese leader Xi Jinping, their table talk will undoubtedly have a global impact.

Trump and Xi will be seeking a way out of a trade war between the world’s two biggest economies, while also saving face for their domestic audiences at home. Trump says: “There’s some good signs. We’ll see what happens.”

The Trump-Xi meeting is the marquee event of Trump’s whirlwind two-day trip to Argentina for the Group of 20 Summit.

Trade analysts and administration officials acknowledge it won’t be easy. The United States and China are locked in a dispute over their trade imbalance and Beijing’s push to challenge American technological dominance.