The Latest: Trump to meet Japan’s emperor, talk with Abe

After a day spent playing golf and watching sumo wrestling, President Donald Trump gets down to more formal business Monday during his trip to Japan.

He’s set to become the first head of state to meet Japan’s new emperor, Naruhito, who succeeded his father on May 1.

Trump will also be the guest of honor at a banquet hosted by the emperor at Japan’s Imperial Palace.

And Trump and Prime Minister Shinzo Abe plan to hold talks and a joint news conference.

Trump has set measured expectations for what will be accomplished, tweeting that serious trade negotiations with Japan “will wait until after their July elections,” referring to upcoming parliamentary elections. Also expected to be on the agenda: North Korea.

Japanese sumo fans say they’re happy President Donald Trump took the opportunity during his visit to Tokyo to watch the national sport in person — even if his attendance caused some changes to the usual arrangement for fans.

Trump presented a special trophy to the winner of a tournament after Sunday’s match.

Shinichiro Idehara, a 54-year-old government employee, bought a ticket after learning Trump would be going. 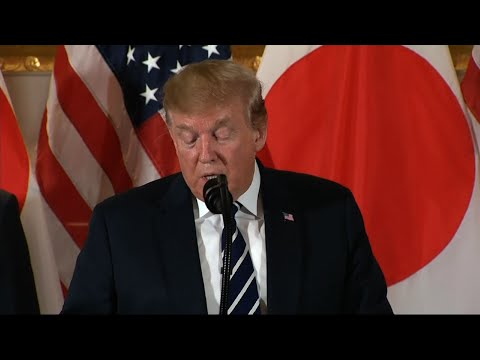 Idehara said “that means he has an understanding of Japanese culture and I’m happy to know that.”

And here’s what Mayuko Ueda, a 22-year-old office worker, had to say: “It’s good to see the American leader coming to watch a national sport. I hope that helps to deepen ties.”

The Japan Sumo Association instituted some safety precautions because of Trump, including cutting in half the number of same-day tickets sold. The throwing of zabuton cushions that participants sit on — something that’s traditionally done to express disappointment — was banned.

Before the leaders and their wives sat down for dinner at a hibachi restaurant, Trump told reporters that he always wanted to see sumo wrestling and that it was an “incredible evening.”

Trump also said he hopes the “President’s Cup” that he presented to the tournament’s winner will be around “for many hundreds of years.”

Abe said he believes the presentation was an “unforgettable moment” for the champion wrestler.

Trump also said the leaders had a productive day discussing trade, the military and other topics during their time together.

President Donald Trump has presented a special “Trump” trophy to the winner of a sumo tournament in Tokyo.

The giant eagle-topped “President’s Cup” has gone to wrestler Asanoyama, who actually clinched the title before the matches that Trump attended Sunday.

Trump read a certificate awarding Asanoyam the cup in honor of the wrestler’s outstanding achievement.

The president hoisted the hefty cup into Asanoyama’s arms with the help of an official. The White House says the trophy is 54 inches (137 centimeters) tall and weighs 60 pounds to 70 pounds (27 kg to 32 kg).

Asanoyama was also presented with the prime minister’s and emperor’s trophies.

Trump is in a low-back chair, in a break from the custom of sitting cross-legged on a mat.

The president, first lady Melania Trump, Japanese Prime Minister Shinzo Abe and his wife, Akie, joined an estimated 11,500 people who are in the arena to see Sunday’s event.

The Japan Sumo Association instituted some safety precautions because of Trump, including cutting in half the number of same-day tickets sold. Ticket holders also had their bags checked at the entrance, and canned and bottled drinks were banned.

The throwing of zabuton cushions that participants sit on — something that’s traditionally done to express disappointment — also was banned.

Abe is trying to entertain the president and stay on his good side as the two face challenging trade talks. Appealing to Trump’s taste in food, Abe served him a double cheeseburger made of U.S. beef for lunch.

The leaders played 16 holes Sunday on a golf course south of Tokyo.

Afterward, Abe told reporters: “We were able to exchange views in a cozy atmosphere. It was wonderful.”

President Donald Trump tweeted after playing golf with Japan’s prime minister that he was told by “Numerous Japanese officials” that “the Democrats would rather see the United States fail than see me or the Republican Party succeed - Death Wish!”

It’s an unusually political statement coming from a president in the middle of an international trip.

Trump also tweeted that “Great progress” is “being made in our Trade Negotiations with Japan,” though he has said that he doesn’t expect a deal to be reached until after July’s Japanese upper house election.

The outing is part of Abe’s campaign to stay on Trump’s good side amid trade tensions between their countries.

Abe and Trump played 16 holes and had breakfast together before teeing off.

The Foreign Ministry says in a statement that the leaders “deepened their friendship amid a cozy atmosphere.”

The silver trophy that President Donald Trump has given to a champion sumo wrestler has gold detail, stands on a wooden base and features an eagle with its wings spread perched on top.

The inscription includes a pair of presidential seals and reads: “Presented by Donald J. Trump, President of the United States of America, to the Sumo Grand Champion, Tokyo Grand Sumo Tournament, May 26, 2019.”

Japanese Prime Minister Shinzo Abe (shin-zoh AH’-bay) drove President Donald Trump around the Mobara Country Club in a golf cart as they met to play another round.

It’s the fifth time the leaders have played golf. It’s part of a continuing charm offense by Abe to stay on Trump’s good side amid trade tensions between their countries.

President Donald Trump is lowering expectations that he’ll make significant headway on trade talks during his trip to Japan.

Fox News White House correspondent John Roberts tweets that Trump called him Sunday morning in Tokyo and told him that while he and Prime Minister Shinzo Abe (shin-zoh AH’-bay) will discuss trade during Trump’s visit to Japan, Trump intends to wait until after Japan’s July elections to push for a deal.

Trump has said he hopes the new deal will address a trade imbalance, remove barriers to U.S. exports, and ensure fairness and reciprocity in the relationship.

President Donald Trump is playing down recent North Korean missile tests. He tweets from Tokyo that the tests aren’t a concern for him, even though they are for Japan.

Trump says that the North “fired off some small weapons, which disturbed some of my people, and others, but not me.”

That message appears to contradict what his own national security adviser, John Bolton, told reporters Saturday. Bolton said the short-range missile tests are a violation of U.N. Security Council resolutions.

Trump says “he has confidence” that North Korean leader Kim Jong Un (gihm jung oon) “will keep his promise to me.”