OKLAHOMA CITY (AP) — A manhunt continued Thursday night for a suspect who shot another man during an argument inside an Oklahoma City mall, forcing its closure as police spent hours searching stores and clearing out frightened shoppers who hid following the gunfire.

Capt. Larry Withrow said Penn Square Mall had been cleared, and video footage had been found showing the suspect leaving just after the fight.

Police said the victim was in critical but stable condition at a hospital after being shot in the chest.

After the shooting, officers searched the mall for the suspect, and cleared out shoppers who had taken cover.

“When the shooting started, there were bunch of people hid in closets, hid in back rooms, locked the stores,” Sgt. Kris Gellenbeck said. “So they’re having to go store to store to clear the civilians out and look for the suspect.”

The shooting came amid the busy holiday shopping season, just days before Christmas. Those standing in the mall’s parking lot after the shooting included a person dressed as Santa Claus. 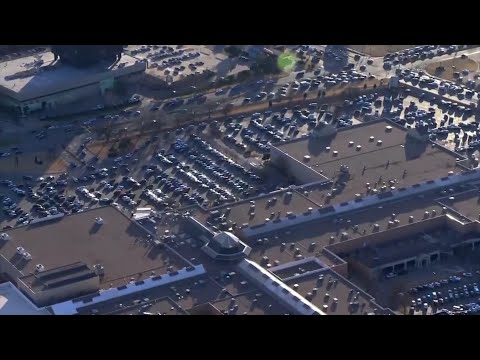 Amari Lafevers, who works at J.C. Penney in the mall, told The Oklahoman that she was completing a sale at the cash register when people started running and saying “Shots fired! Shots fired!”

Among those evacuated from the mall were members of the Oklahoma City Thunder, who had been at a private movie screening. A team spokesman says the team was never in any danger.