Flynn dismissal a surprise? AG Barr in sync with Trump

But it didn’t really matter.

The extraordinary action underscored the extent to which Trump and Attorney General William Barr have been in sync in their views on the federal Trump-Russia investigation — with or without communicating about it. Barr himself has openly challenged the decisions of predecessors and his own prosecutors. He’s launched internal probes to investigate the investigators.

Trump is emphatically welcoming the Flynn action. He has relentlessly railed against the special counsel’s inquiry into his 2016 campaign’s contacts with Russia — which the Flynn case grew out of — and was eager for news in his favor to shift voters’ focus away from his administration’s handling of the coronavirus pandemic that has crippled the U.S. economy.

Beyond that, the decision to dismiss the Flynn case had the effect not only of undoing a key prosecution from special counsel Robert Mueller’s investigation of Trump’s winning campaign, but also of sparing the president from having to make a politically charged pardon decision in the current election year.

The sudden action on Flynn has produced familiar divisions in public opinion. Trump allies cheered the results, while Democrats and some current and former Justice Department officials expressed dismay. 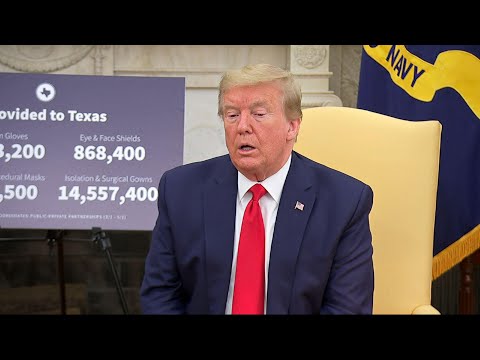 “Bill Barr is a man of unbelievable credibility and courage,” Trump said during a Friday telephone interview on “Fox & Friends” where he devoted substantial time to the news. “And he’s going to go down in the history books.”

House Speaker Nancy Pelosi agreed about going down in history but for a different reason. She said, “Attorney General Barr’s politicization of justice knows no bounds.”

Trump suggested Friday that more surprises could be afoot, saying “a lot of things are going to be told over the next couple of weeks.” He said the “jury’s still out with regard” to FBI Director Chris Wray.

If Trump was upset for political reasons about the case of Flynn, the Justice Department says Barr was troubled by legal issues. Those include what he believes were irregularities in the FBI’s 2017 interview of Flynn, who pleaded guilty to lying to agents about his conversations with the Russian ambassador.

However, the dismissal was just the most recent example of Barr challenging conclusions from the Russia investigations in ways that have stirred criticism. Mueller privately criticized him last year for not adequately capturing the severity of the special counsel’s findings in the Trump-Russia investigation in Barr’s four-page letter summarizing the probe’s conclusions. Barr has said he doesn’t believe there was sufficient evidence for the FBI to open a full investigation, and that the FBI launched “an intrusive investigation of a U.S. presidential campaign on the thinnest of suspicions.”

In February, he overruled prosecutors in the case of Trump ally Roger Stone, on grounds that they had recommended excessive prison time. He appointed one U.S. attorney to examine the origins of the Russia investigation — now a criminal investigation — and another to look into the Flynn case specifically.

The entire Stone trial team quit the case, and in a likely sign of dissent Thursday, Flynn prosecutor and Mueller team member Brandon Van Grack withdrew shortly before the filing was submitted.

The Flynn outcome was startling in multiple ways, not least because the Justice Department rarely undertakes internal reviews of its own prosecutions — let alone cases in which a defendant has pleaded guilty.

The Jan. 24, 2017, interview of Flynn came at a pivotal juncture, as the FBI scrambled to untangle potential ties between the Trump campaign and the Kremlin. Agents knew from a transcript of Flynn’s call with Ambassador Sergey Kislyak that Flynn had discussed U.S. sanctions with Kislyak, but were distressed that White House officials were publicly insisting otherwise and scheduled an interview with him.

“The idea that it wasn’t appropriate to go do some interview of Flynn, and that the basis of the investigation was somehow untoward, is obviously remarkable and unbelievable at the same time,” said former Justice Department prosecutor Ryan Fayhee.

Flynn, a retired Army lieutenant general, would later be ousted from the White House, with officials saying he lied to them.

But the Justice Department now says there was no basis to question Flynn, especially since agents were prepared to close their investigation into him weeks earlier after finding nothing to suggest he had committed a crime.

The department also suggests the FBI erred by not advising Flynn that it was a crime to lie, even though the agency said less than two years ago it wasn’t required.

Some current and former officials say there are less extreme remedies for issues like the ones the department identified. The department, for instance, could have supported Flynn’s bid to withdraw his guilty plea.

But a senior Justice Department official said the department believes concerns about the FBI’s conduct — one of the agents who interviewed Flynn was later fired for derogatory text messages about Trump during the investigation — would have made it difficult to win at trial had a judge agreed to withdraw the plea. That official was not authorized to comment publicly and spoke only on condition of anonymity.

One Justice Department prosecutor not involved in the case expressed bewilderment about the decision, especially since it involved walking away from a guilty plea and conviction.

The prosecutor, who also spoke only on condition of anonymity, said the persistent attacks on the FBI have given defense lawyers ammunition to attack federal investigators as corrupt, and have exposed political divisions inside Justice Department offices that are meant to be apolitical.

As for Flynn, he responded to the news by posting a video of his grandson holding an American flag and reciting the Pledge of Allegiance.

“He feels like a huge weight has been lifted off him,” Heaney said. “For all of us, we were never doubting the fact that he was innocent.”