AP Was There: Shock, then terror as Columbine attack unfolds

LITTLETON, Colo. (AP) — On April 20, 1999, two teenage boys dressed in black trench coats went on a killing rampage at Columbine High School in suburban Denver. They shot and killed 12 classmates and a teacher and wounded two dozen others before taking their own lives.

Twenty years later, The Associated Press is republishing this story about the attack, the product of reporting from more than a dozen AP journalists who conducted interviews in the hours after it happened. The article first appeared on April 22, 1999.

A moment of surprise, then hours of terror

LITTLETON, Colo. — Her favorite lunchtime meal was ready — “my only meal,” jokes Sarah DeBoer. So, nachos in hand, she headed toward the commons area of the Columbine High School cafeteria.

It was a sunny Tuesday morning, maybe 60 degrees, only 17 school days before graduation, and a spring mentality was afoot — the kind that says summer is on the horizon.

Outside, two disaffected young men knew something their classmates didn’t. Dylan Klebold and Eric Harris had endgame in mind.

Ms. DeBoer, who knew the pair in passing, had talked to them Friday. True, they liked to bluster about guns and vengeance and Adolf Hitler. But they seemed — for them, at least — fine. 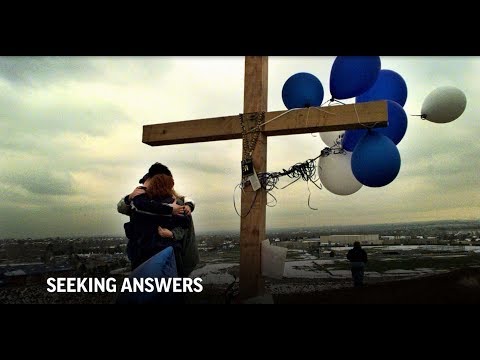 Upstairs in the school library, four dozen students were studying their way through the lunch period.

Down the hall, Dave Sanders, a popular instructor and coach, was teaching a science class. Nearby, Stephanie Williams, 16, a junior, was in the choir room singing.

In the cafeteria, they thought it was a lunchtime prank. Whatever it was, it was getting closer.

Sarah DeBoer, a 16-year-old sophomore, hit the floor with her lunch companions. As realization washed over her, she uttered one thing. Whether it was aloud or just to herself, she doesn’t quite remember.

In moments of chaos and hours of confusion, memories can cloud. But, through myriad interviews and briefings, an intelligible if still imprecise portrait emerges of what unfolded behind a suburban school’s pale brown walls.

Just after lunch period begins, two young men in black trench coats open fire in the parking lot. Senior Wade Frank, 18, outside in the parking lot next to a picnic area, hears popping sounds and sees a girl lying against a curb, shot in the leg. As he watches, another youth is shot in the back and falls forward.

Then one gunman throws a bomb into the parking lot and heads inside.

“He was just casually walking. He wasn’t in any hurry,” says Frank.

Sophomore Denny Rowe, 15, is outside having lunch with friends. “These guys opened fire on everything that looked human,” says Rowe. Bullets are bouncing everywhere.

As the gunmen walk into the school, two students lie dead outside. Still shooting, the two walk to the cafeteria, where food server Karen Nielsen hears someone yell, “Get down!”

Klebold, 17, and Harris, 18, are heavily armed — an assault rifle, sawed-off shotguns, handguns. In the cafeteria, one removes his trench coat to reveal home-made grenades. He tosses a pipe bomb.

Gunshots echo. Students fall. One gets up to run and others follow.

Word spreads: The “Trenchcoat Mafia” has gone nuts. Many of the 900 students in the building duck into closets and bathrooms, under tables and chairs. A couple call 911 with cellular phones. Dozens flee the building and hide in brush around the school.

Senior Nick Foss, 18, and a friend push two teachers, a cook and another woman into a bathroom. “I heard people praying for their husbands and their children,” says Foss. The attackers bang on doors, yelling: “We know you’re in there.”

Casey Brackley, 15, is in the gym when an administrator herds kids into the equipment room.

“I hit my knees and prayed,” Ms. Brackley says. They stay for 15 minutes before the administrator directs them outside.

Neil Gardner, the Jefferson County sheriff’s deputy assigned to the school full-time, hears shots and spots one of the gunmen in a first-floor hallway. He radios for backup and returns fire as bullets ricochet off lockers. Within minutes, seven officers arrive and begin pulling students, including a few shooting victims, from the building.

In the choir room, above the commons, Stephanie Williams and her classmates hear the sounds.

Someone comes to the door and, with a thumb-forefinger gesture, gives them a warning: gun.

Her teacher tells everyone to sit. But in moments, the school’s two-level auditorium next door seems a safer place, so some go; then, after about 10 minutes, they run into the main hall.

“The group I was in headed straight for the door. He was shooting at us,” Stephanie says. “All we knew was to run.”

As they flee, a door behind them explodes in gunfire.

Sarah DeBoer, separated from her friend who had run into the weight room, lies on the cafeteria floor until she hears a car explode outside. Then she runs into the auditorium and lies down between seats.

There she stays for some time. Fellow students — 15, maybe 20 — cry softly. Teachers warn them to be silent. In the distance, they hear sharp reports and dull explosions. Finally, a janitor enters and tells them: Go!

They run, and gunfire follows.

“I turned, and I saw Dylan was the one who turned and shot at me,” Sarah says. “He didn’t know it was me; we were just running out of the auditorium.”

The gunmen head upstairs toward the library.

“All jocks stand up! We’re going to kill every one of you,” one gunman yells in the library.

Student Aaron Cohn, a ballplayer, is spared because a girl leaps onto his back while he lies on the floor, covering the baseball slogan on his shirt.

“They were laughing after they shot,” Cohn says. “It was like they were having the time of their life.”

Some students are slain at their desks, one with pencil still in hand. The gunmen play “peek-a-boo” with others, finding them cowering under desks and opening fire. Isaiah Shoels, who is black and has tangled with the gunmen before, is one of those to fall.

Some kids play dead. By the time it is over, 12 aren’t playing.

Klebold and Harris leave behind shattered windows, bloody floors and a quiet unlike any the library has ever heard. Elsewhere upstairs, Sanders, the teacher, has been shot twice in the chest but manages to get students down a hallway away from danger. He stumbles into a science room, bleeding and coughing blood.

Outside, the first SWAT team is on the scene 20 minutes after the first 911 calls, joining the sheriff’s deputies. It finds several explosive devices around the school and treads cautiously.

“We had initial people there right away, but we couldn’t get in,” Jefferson County Sheriff John Stone says. “We were way outgunned.”

About 45 minutes after the shooting begins, at noon, ambulances take the first wounded students — the ones who managed to run outside — to hospitals. Bomb teams, firetrucks, more SWAT units and paramedics arrive.

Nick Foss and other students manage to crawl into a space between the ceiling and acoustic tiles. Foss falls through a tile, crashing onto the floor of the teacher’s lounge. He runs.

Kammi Vest, 18, hides in the choir-room closet with up to 60 other students. Others try to crawl through heating vents to safety.

In the science room, Dave Sanders is dying. Students cover the 47-year-old teacher with their shirts and a blanket and keep him talking. But his pulse slows, and he grows cold.

Shots are heard until almost 12:30. About that time, in the library, Dylan Klebold and Eric Harris turn their guns on themselves, though no one will be sure of this for hours.

As 12:30 passes, after no shots echo for several minutes, SWAT teams begin sweeping the building room by room. It is, quite literally, a minefield: Dropped backpacks are everywhere, each a potential bomb. In the coming days, bombs will turn up in various shapes and sizes. They include two 35-pound propane bombs hidden in the school’s kitchen.

At about 2:30, SWAT teams begin freeing those in hiding. In small groups, hands behind their heads, they run from the school to a holding area. They are frisked, questioned, offered medical care and bused to Leawood Elementary School to be reunited with parents.

By now, the world is seeing it all on TV. Escaped students cling to each other. Tears flow freely for some; for others, it will take time. Even the tough guys, the ones with the backward baseball caps and the baggy camo pants, cry. 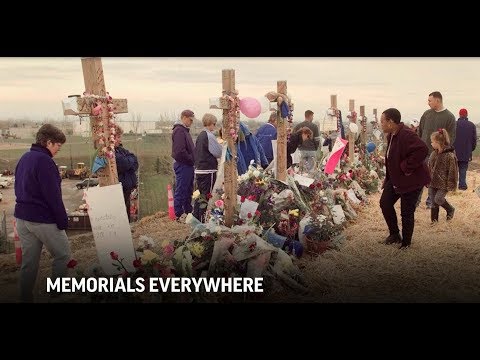 AP Director of Photography David Ake describes the many flowers and mementos left at makeshift memorials after the Columbine shooting.

At 4:30, with the gunmen’s bodies found, authorities declare the school under control. In goes Dr. Chris Colwell, summoned for a medical synopsis. In the sun-dappled, silent library is the worst sight he has ever seen.

“You walk in there with that hope that there might be somebody who’s still alive and still salvageable,” Colwell says. “It didn’t take long to see that wasn’t the case.”

He pronounces them all dead — 10 students and two alienated schoolmates who let their anger consume them.

The bodies will stay there for an entire day, until the known bombs are cleared.

By the following afternoon, nearby Clement Park has become a place of mourning. Students and teachers and gawkers, they come to commiserate, to speak of faith and perseverance, to see the spectacle and talk to the press.

Among the pilgrims: Sarah DeBoer, wearing her Columbine football jersey, and Stephanie Williams, accompanied by a friend to comfort her. They stand together, yards from the scene of their lives’ greatest terror, and they try to process the scenes running through their mind.

“Yesterday I was so scared,” Ms. DeBoer says, her voice falling.

“They ruined the school, but I think we should definitely go back,” she says. “If you don’t go back, they’ll win.”