LANSING, Mich. (AP) — Gov. Gretchen Whitmer on Thursday extended Michigan’s stay-at-home order through April, saying it must continue longer to combat the coronavirus pandemic that has sickened more than 21,000 people and contributed to nearly 1,100 deaths.

Meanwhile, a Detroit-area health care system with hundreds of COVID-19 patients is seeing “glimmers of hope” as the number of people sent home exceeds the number appearing in emergency rooms.

Whitmer’s stay-home order took effect March 24 and would have expired next week. It prohibits many employers from requiring workers to leave their homes unless necessary to protect life or conduct minimum basic operations. It also bars all gatherings outside a single household, except to care for a family member. Places of worship are exempt.

The expanded measure puts new restrictions on stores to reduce crowds. Large stores must limit the number of customers to no more than four at a time for every 1,000 square feet of space. Smaller stores have to cap capacity at 25% of occupancy limits.

Starting Saturday, people with multiple homes cannot travel between them. Travel to vacation rentals is barred. Funerals are allowed, as long as no more than 10 mourners attend. 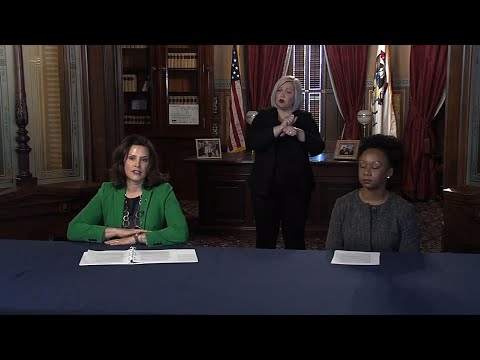 Whitmer cautioned that the extension does not mean everything will return to normal on May 1.

“It’s going to take us some time to get through this crisis,” she said. “While we hope to re-engage parts of our economy, we must always do so driven by what the best science, the best practices for our health dictate.”

Republicans who control the Legislature criticized the the extension, arguing the restrictions should be loosened in places with little growth in infections as unemployment skyrockets. They said businesses that adopt strict safety measures should reopen.

“After an initial three weeks of extraordinary restrictions on their freedoms and their livelihoods, our citizens have earned our trust and our faith in their ability to be an active part of keeping Michigan healthy and safe,” said Senate Majority Leader Mike Shirkey.

But Whitmer said the mitigation policy is working and will not succeed with more exceptions.

“We have to double down right now to save lives,” she said. She allowed auto dealerships to conduct remote sales, but showrooms must remain closed.

Megan Grahn, 22, of Detroit, agreed with the stay-home order.

“You can’t go any other way,” she said. “A lot of people want a hard end date. You can’t ask the coronavirus when it will be done.”

Henry Ford Health System reported 714 COVID-19 patients at its five hospitals in Detroit and the suburbs. More than 900 have been sent home in the last 30 days.

Michigan reported at least 21,504 confirmed cases Thursday and 1,076 deaths from COVID-19, the disease caused by the coronavirus. The number of new cases fell 15% from Wednesday, while the latest number of new deaths was stable at 117. More than 3,800 patients were hospitalized.

Detroit Mayor Mike Duggan said the “center of the battle” was nursing homes. He said 11 nursing home residents have died and there have been 141 confirmed infections. The city will test 160 residents daily starting this weekend. The homeless are getting tested at shelters.

Duggan, a former hospital executive, said a key measure of progress will be the demand for beds at TCF Center, a temporary hospital opening Friday. The capacity will be 1,000, but the number of beds filled will depend on how area hospitals handle their caseloads.

Whitmer announced that a task force led by Lt. Gov. Garlin Gilchrist II will make recommendations to address the outbreak’s disproportionate impact on black residents. African Americans comprise 14% of Michigan’s population but at least one-third of cases and 40% of deaths. “This virus is holding up a mirror to our society and reminding us of the deep inequities in our country,” Whitmer said.