‘I flinched’: Mickelson lets an opportunity slide at Pebble

PEBBLE BEACH, Calif. (AP) — It was the kind of mistake that could cost a guy the U.S. Open.

“I flinched,” Phil Mickelson said about a 22-inch putt that rimmed out on the third green Thursday.

It was hardly the worst thing that’s happened to Mickelson at the major that has escaped him, sometimes ever-so cruelly, all 27 times he’s played in it. If he’s able to claw back into contention at this one, who knows how important that wasted shot might be?

Mickelson opened at Pebble Beach with a 1-over 72 that, on many days at the U.S. Open, would be the sort of score players smile about. Just not on this day.

At the end of a day featuring calm and overcast conditions with soft greens, Mickelson trailed leader Justin Rose by seven. Not out of it, certainly, but not as good as it could have been.

“There was a good opportunity to score, and I played better than I shot,” Mickelson said. “But there’s three more days.”

If’s he going to make up ground, he certainly needs to do better on the greens, which were not, in any way, playing the way they were last year on Saturday at Shinnecock. That time, frustrated with the crisped-out putting surfaces and the USGA in general, Mickelson swiped at his ball on the 13th green while it was still rolling, incurring a two-shot penalty and the wrath of golf purists everywhere for a move so unbecoming. 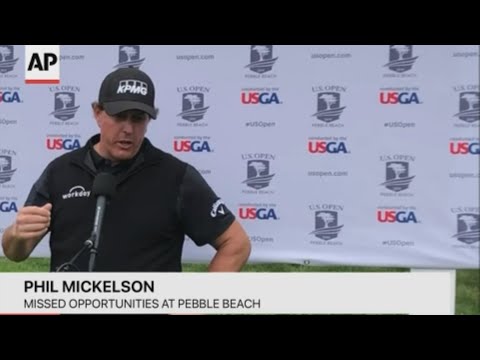 A year later, on the other side of the continent, Mickelson served up nothing nearly as dramatic — but his performance resulted in a squandered chance nonetheless.

Holding steady at even par after 11 holes, his drive on No. 3 landed in the middle of the fairway, 93 yards away, and he looked positioned for a birdie. He left the lob wedge 40 feet short of the hole. After the birdie attempt barely missed, Mickelson was in tap-in range. He stepped up, chomped on his gum and took the putter back. The ball lipped out, and ended up farther away than it started.

Mickelson made no excuses for that bogey.

“I flinched. My concentration, I should be able to tap that in,” Mickelson said.

Later, he spun a gorgeous wedge to inside of 6 feet on the 108-yard par-3 seventh, but left the blade open and swiped across the ball on the birdie putt. On an easy day at Pebble, he played what is traditionally the “easiest” stretch of the golf course — 3 through 7 — in even par.

These numbers tell it all: Mickelson hit 13 of 18 greens in regulation, good enough to tie for 11th in approach accuracy. But he needed 32 putts — tied for 139th in the 156-man tournament.

“I think this is the best I’ve ever seen, and I’m sure it will get progressively more difficult,” Mickelson said, when asked about the speed of the greens. “But this was a chance to get a few under par, and I just didn’t quite do it.”

Mickelson turns 49 on Sunday, and some view this year as his last, best chance to win the major that has eluded him. Pebble Beach is a course that has his DNA all over it. Mickelson’s grandpa caddied here when it opened 100 years ago, and Mickelson himself has won the regular PGA Tour stop at Pebble five times, including earlier this year.

He’s not hiding from the sense of urgency, and the crystal-clear reality that he is running out of time.

“Certainly, that’s going to be important,” he said. “But the good news for me is I’m playing really well. If I’m patient, I’ll get better as the week goes on. The goal is just to get within striking distance for Sunday.”