The first time Alexis Dixon attended a sound bath Evensong at the church, she cried. “I was just sitting there and the light was coming through a stained glass window. Incense was burning, and it felt like, really moving. It was pretty unreal.”

In the Anglican tradition, Evensong is a liturgical service that combines music and scripture to mark the turn of day into night. What you see and hear varies depending on the city and the church. At St. Paul’s Cathedral in London, one might hear a full choir with pipe organ accompaniment featuring the music of 16th century English composers Thomas Tallis or William Byrd.

Sound bath is a sonic meditative practice where participants are enveloped in a sea of sound.

During sound bath Evensong, ethereal voices sing sacred texts as a musician pumps a Shruti box, creating a low, steady hum. A single pitch from a singing bowl dissolves into sonorous overtones from a large gong. It penetrates to the core. The sounds are primal and soothing. For those who sit in quiet contemplation in the pews, the unique acoustic experience offers a chance to clear the mind. 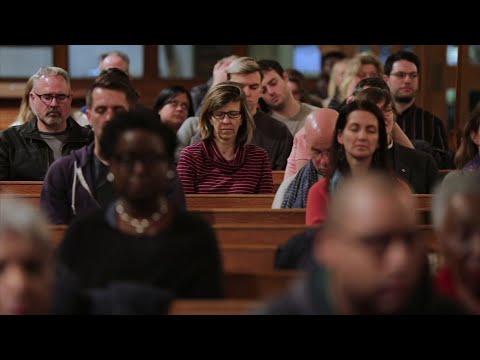 “This gives me an opportunity to be refreshed,” said Lena Mullings, a parishioner who has attended All Saints since 1994. “I know we’re living in very serious times. There’s a lot of negativity that we face in our society today. But (after Evensong) I go out emptied of all that negativity and with the new ways of looking at things, with new energy.”

At a neighborhood parish like All Saints, the forty-five-minute liturgy is smaller in scale, but not in purpose: the contemplative service uses music, candles and incense to create an oasis of calm so people can sit quietly in communion with others as the outside world rages on.

“We’re living in a time when words and sound are being used as weapons,” said the Reverend Steven Paulikas, rector at All Saints, where he leads the service. “We’re constantly being bombarded by these messages. I think the church and other religious institutions have an obligation to help people take care of their own souls.”

Over a year ago, Paulikas decided to experiment with a new approach to Evensong—he invited a sound bath musician to join him on the altar as part of a monthly service. Sound baths, which are non-religious in practice, have grown in popularity in recent years and usually take place in yoga and meditation studios. Participants lie on their backs on mats as a facilitator creates a cocoon of ambient sound using Himalayan and crystal singing bowls, chimes, and tuning forks. There is often a gong and a Shruti box– a hand pumped instrument used to create a drone-like chord often heard in Indian classical music. Churches like All Saints also offer their space up for sound baths, but usually after hours when religious services are over.

For Paulikas, that’s where his idea began to take form, during a weekly, non-religious sound bath at his own church. Lying on the floor, staring up at the cavernous ceiling he thought, “I love this so much. It really feeds my soul,” he said. “I’m having feelings that are very similar to when I’m worshiping in church normally. And wouldn’t it be amazing if all these people who were here for the sound bath were able to experience the same richness of the church’s liturgy that I experience and love.”

The use of sound in religious ceremonies and practices over the centuries is common. What is unusual are the ways this mix of instruments, which aren’t normally found in a church setting, are incorporated within the liturgy. “Worship changes over time,” Paulikas said. For instance, churches didn’t always use pipe organs in services, “So this is just the continuing evolution of the church’s liturgy.”

Carol Argento has been an active parishioner at All Saints for four years as both a Chalice Bearer and a member of the Altar Guild. She’s noticed how this monthly event attracts a younger crowd than the Sunday morning Eucharist. “I think they are searching for something but aren’t quite ready to jump into religion in a traditional church,” she said. “This allows them to participate, to have some time with God without it being so structured.”

Alexis Dixon has attended sound baths for two years, mostly in yoga studios. It helped her deal with the stress of her job as a teacher. “I was having a particularly difficult time at work and it felt like I needed to focus on really centering myself and being stable so that I can be present in the classroom,” she said. She finds sound baths make her more resilient and less triggered by the demands of her work. Though, when she was invited to attend a sound bath that was part of a formal church service, she hesitated. “I felt like I would get a message that I didn’t necessarily agree with and it would focus too much on the Bible,” she said. Raised Baptist, Dixon left organized religion behind when she moved with her mom to New York from Jamaica.

Despite her reservations, she decided to go anyway and was surprised by what she found. “I get to meet people, talk to people who are very kind,” she said. “We have to honor the fact that there are different spiritual practices that resonate with different people for different reasons. Saying it’s okay that a certain practice doesn’t involve God, and we accept it is huge.”

Paulikas doesn’t disguise the fact that this sound bath service is a form of worship. He hopes it doesn’t deter people from coming, regardless of their affiliation or what they believe. “In this time, with so much distraction, so much chatter, and so much hurtfulness,” he said. “Part of the thing that the church can offer is a space where people can encounter themselves in God’s presence in a way that is life giving and healing.”