New Harmony High School opened in the fall of 2018 and currently serves about 100 south Louisiana students, including 14-year-old Mei Miller. She commutes 30 miles (50 kilometers) one-way from her home in Slidell, Louisiana, to attend New Harmony.

Though just a freshman, Miller said, she already knows she would like to be an engineer working on renewable energy sources and coastal restoration.

“I think that things like wind turbines or solar panels are really, really important for us to be focusing on,” Miller said. “The main problem is that people don’t want to spend the money on that, which really needs to be changed. People need to see that the issue is bigger than the cost.”

Miller said she would also like to see more big businesses with money take the lead on green energy.

“I really like getting to learn alongside the other students about the problems we have that affect everyone else in the world, not even just in the U.S.,” Miller said. 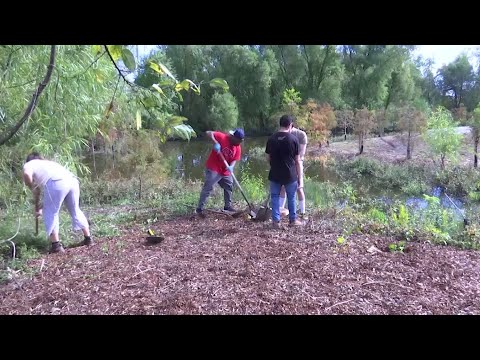 The school’s mission is intricately tied to the state’s future. A multitude of issues from the leveeing of the Mississippi River to oil and gas development have made Louisiana ground zero for coastal land loss. The state estimates that it has lost just over 2,000 square miles of land (5,200 square kilometers) — a tract about the size of Delaware — since 1932.

So many New Harmony assignments and projects deal with coastal restoration and protection.

Besides the classroom work, students spend one day a week off-campus interning with environmentally conscious businesses and organizations in the community. Some plant trees or intern at sustainable restaurants where they learn firsthand about composting, recycling, ways to minimize energy use and avoid use of plastics.

New Harmony is a state charter school situated in a former private church school in New Orleans. It was founded by a group of educators and environmental scientists who initially wanted to put the school on a barge that would take students up and down the Mississippi River from New Orleans to the Gulf of Mexico. That plan proved too costly, said Anthony Burrell, the school’s community coordinator.

But the mission is the same, he said. Students spend time outside the classroom each week participating in field trips, internships and service projects related to sustainability, sea-level rise and other effects of climate change in the community.

A recent project at the Sankofa Wetland Park and Nature Trail in the city’s Lower 9th Ward neighborhood has been putting the students’ skills to work on a project that aims to address the city’s water challenges.

The park provides a natural setting to observe swamp activity within city limits. And during heavy rains, water will be diverted from storm drains into the ponds of the park — making it a working example of green infrastructure that reduces pressure on the city’s pumping system.

The students have spent time at a park pulling invasive plants and planting cypress tree saplings, which are good for water retention and preventing soil erosion.

“When it is the rainy season, hopefully it can fill up, and it’ll kind of change the whole landscape here,” said Jack Metiernan, a sophomore at New Harmony High School. He said he enjoys the opportunity to get outside the classroom and would like to become a zoologist.

Burrell said the goal is not for every student to become a coastal scientist. That is not realistic, especially considering some students are interested in the arts and literature, Burrell said.

“We just want them to understand that regardless of what you do or what we do as a society, we all have an impact on the environment, and that should be factored into the work that you do,” Burrell said.

In a video promoting the school’s mission, one of its founders, Sunny Dawn Summers, said it’s important to rethink what school should be for students today. New Harmony was formed out of a love of Louisiana and the coast, she said, “and the recognition that we have rising sea levels and disappearing land and coastal issues that we aren’t starting young enough to address.”