CHICAGO (AP) — Chicago’s mayor on Tuesday accused leaders of the city’s powerful teachers union of using its “political agenda” to hold up a contract agreement to end a strike that will keep students from classrooms for at least 10 days.

Mayor Lori Lightfoot said the teachers union’s bargaining team demanded “at the eleventh hour” that she support state legislation to elect rather than appoint the district’s school board, as well as changes to state law governing what the union can strike over.

“Are we really keeping our kids out of class unless I agree to support the CTU’s full political agenda wholesale?” Lightfoot said at a news conference. “If the CTU wants a deal, there’s a deal to be had right now on the table.”

During a second press conference hours later, Lightfoot said she met with the union’s president and vice president during the day to present a sweetened offer, putting more money toward reducing class sizes and increasing long-time teachers’ pay.

Lightfoot said the union officials left her office without a deal.

A union spokeswoman referred The Associated Press to a statement that leaders issued earlier in the week, blaming the city for failing to bridge the financial gap between the proposals. 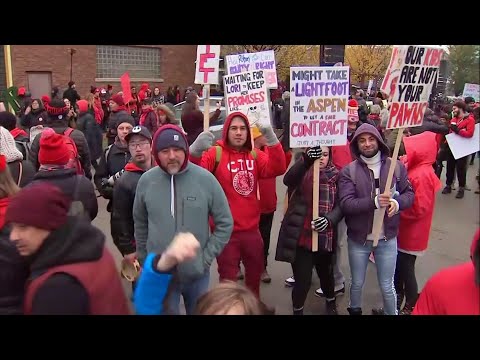 “It took a strike to get the mayor and CPS just to trade proposals to bring down exploding class sizes and alleviate desperate shortages of school nurses, social workers, counselors, librarians and more,” that statement said. “We shouldn’t have to work this hard — and we shouldn’t have to strike — to get our students what they deserve.”

The heated accusations follow several days of contentious closed-door talks seeking to settle the strike, which has kept more than 300,000 students out of classrooms since Oct. 17 in the nation’s third-largest school district.

About 700 teachers that make up the union’s elected House of Delegates met Tuesday night for an update on bargaining talks. Union officials going into the meeting said no vote was planned.

The meeting would let members discuss “next steps to push Mayor Lori Lightfoot and the CPS bargaining team to reach a just settlement of this strike,” they said in a statement.

As a candidate, she said she supported moving to an elected Board of Education rather than the mayor-appointed model that gives the city’s top elected official enormous control over the school district.

She said Tuesday that the legislation that union leaders back is “fundamentally flawed” but didn’t provide details.

Both sides have said in recent days that they made progress on the teachers’ top priorities, including stricter limits on class sizes and additional staffing.

The union’s General Counsel Robert Bloch suggested after a late-night session that ended early Tuesday that Lightfoot could settle the dispute by committing to more resources for schools.

But Lightfoot and the district’s CEO, Janice Jackson, said union leaders are to blame for the impasse.

Jackson called the union’s demand for 45 minutes of preparation time every day “a last-minute grab to take away precious instructional time.”

Adding preparation time has been among teachers’ demands since negotiations toward a new contract began months ago. But as they prepared to strike and set up picket lines, union officials and teachers more often spoke about reducing the size of classes and adding staff, including librarians, social workers and nurses.

Under the 2012 deal that ended the last major teachers’ strike in the city, teachers surrendered some paid preparation time.

Elementary school teachers were guaranteed at least 15 minutes at the beginning of the school day under the contract that expired this summer. The union argues that teachers need more time to prepare lessons and says it’s unfair to expect educators to do that work unpaid outside of school hours.

“One of the great things about collective bargaining is that it gives the parties a chance to really figure out what’s working and what isn’t working,” said Robert Bruno, a professor of labor and employment at the University of Illinois Chicago.

In a 2017 analysis of teachers’ labor contracts, the National Council on Teacher Quality found teachers in large school districts typically get 45 minutes per day to plan. Some of the contracts also specify the amount of time teachers have to collaborate with colleagues.

The district has reached a tentative agreement with a separate union representing thousands of school support staff who went on strike alongside the teachers union. Leaders of that union have said staff won’t return to work until teachers get a deal too.