WASHINGTON (AP) — Top lawmakers on Wednesday blasted the Trump administration’s proposal to slash funding for the State Department and the U.S. Agency for International Development, telling Secretary of State Mike Pompeo the plan would be disastrous for American diplomacy.

Pompeo testified on Capitol Hill about the plan to cut his agency’s budget by 23 percent. He says difficult choices were made when crafting the 2020 proposal but argues the funding is enough to achieve the administration’s foreign policy goals.

Lawmakers don’t see it that way. House Foreign Affairs Committee Chairman Eliot Engel, D-N.Y., said the budget demonstrated “contempt for diplomacy” and “seeks to hobble the State Department.” House Appropriations Chairwoman Nita Lowey, D-N.Y., described the request as “insufficient” and said she intends to work with her colleagues to reject it.

The top Republican on the House Foreign Affairs panel, Michael McCaul of Texas, said while the budget includes some much needed reforms, “certain cuts can have unintended consequences that cost us more in the long term.”

The Trump administration has called for steep cuts to diplomacy three years in a row. Each time, lawmakers have ignored the requests.

Engel repeated that the budget request was “dead the moment it arrived on Capitol Hill.” 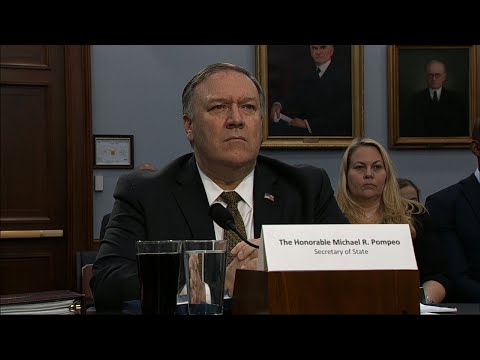 “I don’t know whether this administration really believes we can mount an effective foreign policy — one that advances American interests, values, and security — on a shoestring budget, or if the people calling the shots just don’t care. But Congress won’t stand by and see American leadership on the global stage undermined. And that’s not just our opinion. That’s the power of the purse,” he said.

Republican Hal Rogers of Kentucky said the plan seemed “detached from reality” and warned “if we were to accept cuts of the magnitude proposed it would make our nation less safe, make it harder to achieve the effectiveness we all seek.”

Pompeo told lawmakers the scaled-back budget was drafted “mindful of the burden on American taxpayers,” and his agency’s “obligation to deliver exceptional results on their behalf.”

About a dozen protesters occupied the seats behind Pompeo in the House Foreign Affairs Committee room Wednesday, wearing brightly-colored “free Iran” T-shirts and carrying anti-war signs. Most sat quietly throughout the hearing, but one man interrupted testimony with shouts of “hands off Venezuela, hands off Iran, hands off China” before he was escorted out by security.

The Trump administration has used economic sanctions as a key foreign policy tool to constrain Iranian influence and respond to the escalating crisis in Venezuela. Trump has also imposed a series of tariffs on China in response to trade imbalances.

“I don’t accept the excuse that ongoing negotiations mean we cannot have the information this committee deserves,” Allred said. Under Pompeo, the State Department is leading negotiations with the Taliban and the government of Afghanistan aimed at concluding the 17-year-war there.

“I’m trying to make sure you get the best information that you can that is consistent with your oversight duties. I’m determined to do that. I’m also determined that we protect this information,” Pompeo said.

Despite asking for sweeping cuts in foreign aid overall, the administration’s budget proposal would allocate $3.3 billion in foreign aid to Israel. The Trump administration has made strong relations with Israel a foreign policy focus and has promised a landmark plan to achieve peace between the Israelis and Palestinians.

Pompeo refused to say precisely when the plan would be unveiled, but assured lawmakers it will be made up of “new and fresh and different” ideas. When asked if the plan supports a state for Palestinians as well as the state of Israel, Pompeo said, “Ultimately it will be the peoples of those two lands that resolve this and make that decision about how it is they’ll come together, what the contours of that resolution will look like.”

The State Department budget request also seeks $5.4 billion to improve security for U.S. diplomats, an issue that has received more attention since the deadly 2012 attack on a U.S. compound in Benghazi, Libya.

Pompeo pledged to restore morale when he took up the secretary of state post last year. The department had lost many of its most experienced diplomats during a restructuring process under his predecessor, Rex Tillerson. When asked by lawmakers why many key ambassadorships remain empty — including in Iraq, Turkey and Saudi Arabia — Pompeo blamed delays in the Senate.

“I made a commitment to get the team on the field,” Pompeo said Wednesday, “I want to get these folks out there so we can deliver American diplomacy in every corner of the world.”