UK, EU only harden their positions on Brexit as G-7 nears

BRUSSELS (AP) — The European Union and Britain, which are hurtling toward a costly, damaging no-deal split in a little over two months, kicked off a high-wire week of diplomacy Tuesday by entrenching themselves deeper in their irreconcilable positions.

Highlighting new British Prime Minister Boris Johnson’s determination to leave the bloc on Oct. 31 even if no Brexit divorce deal is in place, his government said as of Sept. 1 it would stop attending all EU meetings where its vital interests were not at stake. Johnson’s Downing Street office doubled down on the message later, stating that unless the trade backstop on the Irish border was abolished “there’s no prospect of a deal.”

The EU, which is not known for its speedy diplomacy, took only half a day to rebuff a four-page proposal by Johnson on breaking a deadlock over ensuring a transparent border between the EU’s Ireland and the U.K.’s Northern Ireland. The bloc said one key part of the proposal was “incorrect” and another “misleading.”

In the diplomatic note from the EU Commission and Council to the EU’s remaining 27 nations, which was obtained by The Associated Press, the member states were strongly urged not to give in to Johnson’s demand that the legal withdrawal agreement the EU negotiated with his predecessor, Theresa May, be changed at this late stage.

Johnson demanded late Monday that the EU re-open Brexit negotiations, scrapping “anti-democratic” provisions for the Irish border that he said would threaten the peace process in Northern Ireland.

“Those against the backstop and not proposing realistic alternatives in fact support reestablishing a border,” Tusk tweeted Tuesday. “Even if they do not admit it.” 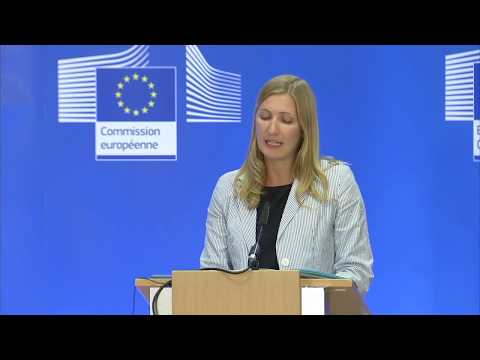 The backstop would keep Britain closely aligned with the European customs union if the two sides can’t agree on other ways to prevent the reintroduction of border checks on people and goods moving between Northern Ireland and Ireland.

The EU’s diplomatic note said it needed to counter Johnson’s assertions, insisting “it is incorrect to state that the people of Northern Ireland have no influence over the legislation that would apply to them.”

Similarly, it said “the letter’s suggestion that two separate legal, political, economic, and monetary jurisdictions already exist on the island and can be managed with an open border is misleading.”

Such words left a huge rift between the sides, just as Johnson was preparing to visit German Chancellor Angela Merkel in Berlin on Wednesday and French President Emmanuel Macron in Paris on Thursday. His trips should culminate in more talks at a summit of G-7 leaders this weekend in Biarritz, France.

On a rare note of guarded optimism, Merkel suggested Tuesday that a “practical solution” could still be found for the Irish border issue, making the backstop superfluous. But she said finding such a solution wouldn’t require reopening negotiations on the current Brexit deal.

Johnson has vowed to leave the EU “come what may” on Oct. 31, with or without a deal aimed at softening the transition.

To that effect, U.K. Secretary of State Steve Barclay said Tuesday that the diplomatic corps “will only go to the (EU) meetings that really matter, reducing attendance by over half and saving hundreds of hours.” He said that would free up time for ministers and staff “to get on with preparing for our departure on October 31 and seizing the opportunities that lie ahead.”

But Johnson is facing rising criticism of his Brexit strategy at home. A leaked report showed that the British government is preparing for widespread shortages of food, fuel and medicines in the event of a no-deal Brexit.

Jeremy Corbyn, leader of Britain’s opposition Labour Party, vowed late Monday to do “everything necessary” to prevent the U.K. from leaving the EU without a deal. That includes calling a no-confidence vote in Johnson’s government and, if it succeeds, competing in the ensuing general election with a pledge to hold a second public vote on Brexit.

After a 2016 referendum in which the public voted to leave the EU, May spent more than two years negotiating a Brexit divorce agreement with the bloc. It was repeatedly rejected by British lawmakers, primarily because of concerns about the Irish border.