WASHINGTON (AP) — The Latest on President Donald Trump and the House impeachment inquiry (all times local):

A key ally of President Donald Trump is dismissing the latest developments in the impeachment investigation, calling it a “bunch of B.S.”

Sen. Lindsey Graham told reporters Tuesday he doesn’t plan to read the transcripts Democrats are releasing from the impeachment investigation, despite demanding that they be made public. He says he’s “written the whole process off.”

The South Carolina Republican is also downplaying revised testimony from Gordon Sondland, the U.S. ambassador to the European Union, about the Trump administration’s pressure on Ukraine.

Sondland for the first time acknowledged a potential quid pro quo with Ukraine, with American military aid held up as the administration pushed the country to release a statement about fighting corruption.

Graham says, “that’s his opinion,” adding, “I don’t think the president did anything wrong.

Mick Mulvaney, the acting chief of staff, was called Tuesday to appear before House investigators. 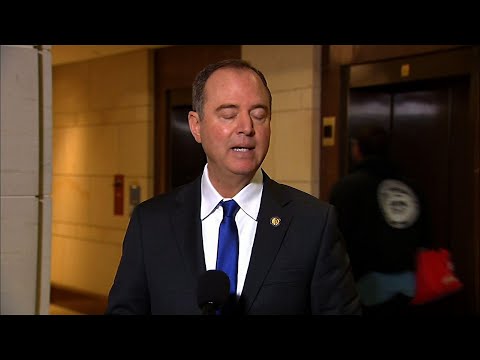 The Trump administration considers the probe a sham and has instructed White House officials not to comply, even if they are issued subpoenas for testimony and documents.

White House principal deputy press secretary Hogan Gidley says in a statement that the Trump administration is not about to have senior advisers to the president “participate in such a ridiculous, partisan, illegitimate proceeding.”

Democrats say the refusal to comply with the oversight role of Congress could be considered obstruction and part of an impeachment proceeding.

The White House claims the release of two transcripts Tuesday shows “there is even less evidence” for impeachment that previously thought.

Press secretary Stephanie Grisham says the testimony of Gordon Sondland, the Trump administration’s ambassador to the European Union, didn’t “identify any solid source” for his acknowledgement that he understood by September that American aid to Ukraine was linked to a public statement promising to investigate corruption in the country.

Grisham concludes, “No amount of salacious media-biased headlines, which are clearly designed to influence the narrative, change the fact that the President has done nothing wrong.”

Top Senate Republican Mitch McConnell says President Donald Trump is unlikely to be convicted and removed from office in the event of a Senate impeachment trial — at least based on what is known now.

The Kentucky Republican told reporters Tuesday that “if it were today, I don’t think there’s any question” that any impeachment trial “would not lead to a removal.”

It takes two-thirds of the Senate to convict a president and remove him from office. That means at least 20 Republicans would have to vote to convict Trump if he is impeached by the Democratic-controlled House.

McConnell added that, “so the question is, how long does the Senate want to take?”

He added that Democratic presidential candidates — six Senate Democrats are running — might prefer to spend their time campaigning in Iowa and New Hampshire instead.

Gordon Sondland, the Trump administration’s ambassador to the European Union, has revised his testimony to House impeachment investigators. He is acknowledging that he understood by September that American aid to Ukraine was linked to a public statement promising to investigate corruption in the country.

Sondland’s lawyers gave House impeachment investigators a new sworn statement in which he makes key updates to his earlier testimony from last month.

In the statement, Sondland says his memory was refreshed by the opening statements of two other key witnesses who have testified in the impeachment inquiry.

Specifically, Sondland says he now recalls a conversation in Warsaw with a top aide to the Ukraine president in which he said that resumption of military aid likely would not happen until Ukraine had provided a public anti-corruption statement.

Democrats Tuesday released hundreds of pages of testimony from two top diplomats: Kurt Volker, the former special envoy to Ukraine, and Gordon Sondland, the U.S. Ambassador to the European Union.

Both testified for hours behind closed doors about Trump’s interest in having Ukraine pursue investigations of Joe Biden and Democrats. The push came as the White House withheld military aid to the East European ally.

The two diplomats were part of a pivotal May meeting with Trump at the White House that raised red flags. They also engaged in a text message chain about the administration’s actions toward Ukraine.

The panels on Tuesday wrote to Mulvaney requesting his appearance, saying they believe he has “first-hand knowledge” of President Donald Trump’s dealings with Ukraine.

In a televised news conference last month at the White House, Mulvaney appeared to acknowledge that Trump held up military aid to Ukraine partly for political reasons. He then later denied that he had said it.

Mulvaney is one of 13 witnesses that the Democrats have called to testify behind closed doors this week. It is unclear if he will show up since Trump has directed members of his administration not to cooperate.

Interview transcripts from the depositions of two key diplomats dealing with U.S. relations with Ukraine are expected to be released by the House impeachment inquiry.

The chairman of the House Intelligence Committee, Adam Schiff, says transcripts expected to be released Tuesday come from the depositions of the former special envoy for Ukraine, Kurt Volker, and U.S. Ambassador to the European Union Gordon Sondland.

Democrats have called for several witnesses to meet the impeachment investigators this week, including Energy Secretary Rick Perry and former national security adviser John Bolton. It’s unclear whether any of them will come to Capitol Hill.

On Monday, four White House officials scheduled to appear before House impeachment investigators for depositions failed to show up, following President Donald Trump’s orders not to cooperate with the probe.