The Latest: Cosby accusers say he got what he deserved

Bill Cosby’s accusers say the comedian got what he deserved when a judge sentenced him to prison for sexual assault.

Some of the women who allege Cosby drugged and raped them spoke out Tuesday after he was sentenced to three to 10 years behind bars.

Another accuser, Lili Bernard, says she hopes the sentence will “send a message to other powerful perpetrators that they will be caught and punished.”

Cosby was convicted in April of drugging and molesting a Temple University women’s basketball administrator. The case helped prompt dozens of other accusers to come forward with similar allegations.

Bill Cosby will spend his first night behind bars at a new state prison in suburban Philadelphia.

Cosby spent a few hours at the county jail Tuesday before heading to SCI Phoenix, a 3,830-bed lockup that opened two months ago. Corrections officials at Phoenix will assess Cosby’s needs to determine where he’ll serve the bulk of his state prison sentence. 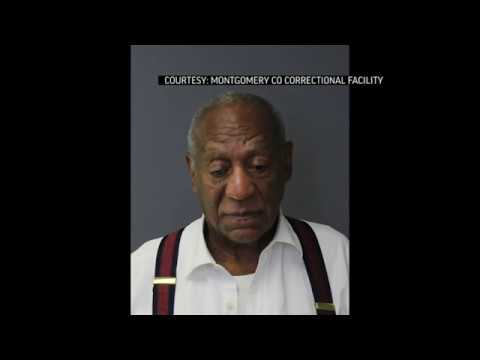 Cosby was sentenced to three to 10 years in prison for sexually assaulting a woman in 2004.

District Attorney Kevin Steele says Cosby could wind up at SCI Laurel Highlands, a prison for lower-risk inmates on the other side of the state, about 70 miles (113 kilometers) southeast of Pittsburgh.

SCI Laurel Highlands serves inmates with special needs and has separate housing units for its geriatric inmates. The 81-year-old is legally blind.

Bill Cosby’s wife is claiming a prosecutor used “falsified evidence” to win a conviction against him.

Camille Cosby released a statement after her husband was sentenced Tuesday to three to 10 years in state prison for sexually assaulting a woman in 2004. She claims District Attorney Kevin Steele, at trial, presented doctored audio of a recorded phone conversation between Cosby and the accuser’s mother. She says the defense team plans to raise the issue on appeal.

Steele rejected the allegation, saying: “It that’s what they’ve got, it’s beyond a hail Mary.”

Wyatt says Cosby “knows that these are lies,” adding: “You know what this country has done to black men for centuries.”

A prosecutor says Bill Cosby has been “unmasked” as a predator now that he’s been convicted and sentenced to prison for sexually assaulting a woman in 2004.

Montgomery County District Attorney Kevin Steele said the 81-year-old used his fame and fortune to “hide his true self and hide his crimes,” intimidating his victims into keeping them silent for decades.

But the prosecutor said “justice was served” after a judge sentenced Cosby on Tuesday to three to 10 years in state prison.

Chief accuser Andrea Constand stood next to Steele at a news conference but did not address the media.

Cosby was convicted in April of knocking Constand out with pills and molesting her at his suburban Philadelphia home. She’s among about 60 women who came forward to accuse Cosby of sexual misconduct.

Bill Cosby will spend the first few days of his prison sentence at the Montgomery County Correctional Facility outside Philadelphia.

Cosby left the suburban Philadelphia courthouse in a dark SUV after a judge sentenced the 81-year-old to three to 10 years in state prison for sexual assault.

A spokeswoman for the Montgomery County district attorney’s office says Cosby will be held at the county jail for at least the next few days. From there, he’ll be taken to SCI Phoenix, a new state prison outside Philadelphia, where staff will assess his physical, medical and security needs.

Cosby could end up in a long-term medical care unit.

Dozens of women have accused Cosby of sexual misconduct during his 50-year career in entertainment. The 2004 assault on Andrea Constand was the only one to lead to criminal charges.

Bill Cosby has left a Pennsylvania courtroom in handcuffs to begin serving a three-to-10 year prison sentence for sexual assault.

Defense lawyers tried to keep the 81-year-old out of prison while he appeals his conviction, saying he’s frail and legally blind. Judge Steven O’Neill refused their plea for Cosby to remain on house arrest, ruling Tuesday that Cosby will be locked up immediately.

O’Neill says Cosby could “quite possibly be a danger to the community.”

Dozens of women have accused Cosby of sexual misconduct during his 50-year career in entertainment. The 2004 assault on Constand was the only one to lead to criminal charges.

A judge has denied Bill Cosby that he’s not entitled to bail while the 81-year-old comedian appeals his sexual assault conviction.

Judge Steven O’Neill sentenced Cosby on Tuesday to three to 10 years in state prison. His lawyers are arguing that Cosby should remain on home confinement pending appeals. O’Neill says Cosby had no right to it.

The judge said it’s “time for justice” as he sentenced Cosby to state prison and fined him $25,000. The former “Cosby Show” star was convicted in April of drugging and molesting Temple University women’s basketball administrator Andrea Constand in 2004.

Bill Cosby has been sentenced to three to 10 years in state prison for drugging and molesting a woman at his suburban Philadelphia home.

Judge Steven O’Neill sentenced Cosby on Tuesday, five months after his conviction in the first celebrity trial of the #MeToo era.

Prosecutors were seeking a sentence of five to 10 years in prison. The defense asked for house arrest.

The 81-year-old comedian did not make a statement in court. Cosby sat back in his chair, his head on the headrest, as the sentence was read.

The entertainer once known as “America’s Dad” was convicted in April of sexually assaulting Temple University athletics administrator Andrea Constand in 2004.

Constand is one of about 60 women who have accused Cosby of sexual misconduct.

The judge in the Bill Cosby case has gone to his chambers to weigh the comedian’s punishment for a 2004 sexual assault.

A jury convicted Cosby of drugging and molesting a woman at his suburban Philadelphia home. Cosby was convicted after the first celebrity trial of the #MeToo era.

The 81-year-old TV star declined to make a statement at his two-day sentencing hearing. The woman he attacked, Andrea Constand, says she’s had to cope with years of pain, anxiety and self-doubt.

A judge has ruled that Bill Cosby is a “sexually violent predator.”

The classification means that Cosby must undergo lifetime counseling and report quarterly to authorities. His name will appear on a sex-offender registry sent to neighbors, schools and victims.

Judge Steven O’Neill made the decision Tuesday as he prepares to sentence the 81-year-old comedian for drugging and molesting a woman at his suburban Philadelphia home in 2004.

Prosecutors are asking for five to 10 years in prison. The defense wants Cosby sent home on house arrest.

Andrea Constand says she’s had to cope with years of unrelenting pain, anxiety and self-doubt after Bill Cosby drugged and sexually assaulted her at his home in 2004.

Constand writes in a victim-impact statement released Tuesday that Cosby’s 2004 attack on her was just “the tip of the iceberg” for the suffering that followed.

Constand says her training as a professional basketball player had led her to think she could handle anything, but “life as I knew it” ended on the night that Cosby knocked her out with pills and violated her.

She says the Cosby team’s subsequent attacks on her character left her with “insurmountable stress and anxiety.”

Constand says she now lives alone with her two dogs, “stuck in a holding pattern” as a middle-aged woman because she has trouble trusting people.

A defense psychologist says the chances that Bill Cosby will commit another sex offense are “extraordinarily low” because he’s old, legally blind and needs help getting around.

Psychologist Timothy Foley testified Tuesday at the 81-year-old comedian’s sentencing hearing. A judge must decide whether to classify Cosby as a “sexually violent predator,” which would make him subject to mandatory lifetime counseling and community notification. The defense is fighting the designation.

Foley met with Cosby in July to conduct a risk assessment. He says the comedian’s lawyers wouldn’t let him discuss certain matters, including the sexual assault that led to his conviction or his admission that he gave quaaludes to women before sex. Prosecutors questioned whether Foley got a complete picture of Cosby’s alleged deviance.

The judge is expected to sentence Cosby later Tuesday.

Bill Cosby doesn’t plan to make a statement in court before he’s sentenced for drugging and sexually assaulting a woman.

Cosby returned to a suburban Philadelphia courthouse Tuesday to learn his fate for the 2004 attack. Cosby spokesman Andrew Wyatt says the 81-year-old comedian plans to remain silent in court. Cosby didn’t testify at either of his two trials.

Prosecutors are asking for a sentence of five to 10 years in prison. His attorney wants the judge to send Cosby home on house arrest, saying he’s too old and frail for prison.

The only defense witness expected to testify Tuesday is a psychologist who believes Cosby is no longer a danger, given his age, and should not be branded a “sexually violent predator.”

Bill Cosby faces a good chance of being sent to prison Tuesday when a judge is expected to sentence the TV star who was convicted of drugging and sexually assaulting a woman.

The once-beloved actor and comedian, dubbed “America’s Dad” for his role on the “Cosby Show,” faces anything from probation to 10 years in prison.

Prosecutors near Philadelphia want a judge to sentence the 81-year-old to five to 10 years in prison. They say he has no remorse and is capable of reoffending.

The defense argues that he’s old, frail and legally blind, and should be sent home on house arrest.