A New York doctor’s story: ‘Too many people are dying alone’

NEW YORK (AP) — As an emergency medicine physician in New York City, Dr. Kamini Doobay has always known that death is part of the territory when trying to care for the city’s sickest.

But it hasn’t always been like this — patients hit the hardest by the coronavirus, struggling to breathe and on ventilators, with no visitors allowed because of strict protocols to prevent spreading the virus.

“So often a patient will be on their deathbed, dying alone, and it’s been incredibly painful to see the suffering of family members who I call from the ICU, hearing the tears, crying with them on the phone,” said Doobay, 31.

“Too many people are dying alone with absolutely no family around them,” she said. “This is one of the most horrific things.”

A third-year resident, Doobay, who works at New York University Langone Medical Center and Bellevue Hospital, said being among the doctors and other health care workers trying desperately to deal with the wave of sick and dying patients coming into city hospitals is “unlike anything I’ve ever experienced, it’s very chaotic, it’s overwhelming.”

While the coronavirus causes mild or moderate symptoms in most people, it can lead to more severe illnesses, including pneumonia and death for some, like those who are older or have underlying health issues.

The impact it’s had on the city’s hospitals also has health care providers like Doobay worried about their own exposure, and wanting officials in charge to do everything possible to get hospital workers the protective equipment they need to protect their own health.

“We did not go into this field thinking we’re going to be martyrs,” she said. “This is a serious crisis that we’re in and we deserve to be protected. We’re not in a battlefield. We’re not in a war zone.” 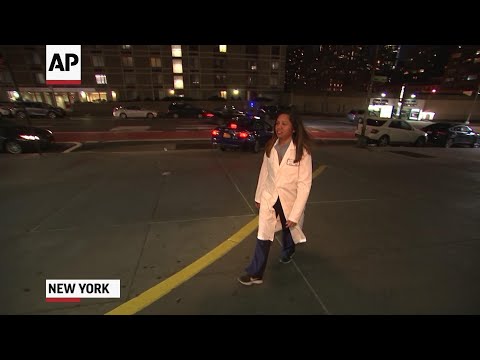 And she worries about the kinds of choices all doctors could be faced with: Who should get what kind of help if the number of cases and hospitalizations continues to increase past the point where there is enough equipment, like ventilators, to meet the extreme patient need?

“Who does that ventilator belong to? These are questions that, you know, I think about when I go home at night and fortunately, haven’t had to make those decisions yet,” she said. “But we’re getting there.”

She hoped the general public would listen to the experts and do all they can to limit the virus’s spread through self-quarantining and similar measures.

Latest on the Pandemic:
ADVERTISEMENT