WASHINGTON (AP) — Defiant in the wake of a stinging budget defeat, President Donald Trump on Friday declared a national emergency at the U.S.-Mexico border, moving to secure more money for his long-promised wall by exercising a broad interpretation of his presidential powers that is certain to draw stiff legal challenges.

In his emergency proclamation, Trump painted a dark picture of the border as “a major entry point for criminals, gang members, and illicit narcotics” and one that threatens “core national security interests.” Overall, though, illegal border crossings are down from a high of 1.6 million in 2000.

His declaration instantly transformed a contentious policy fight into a foundational dispute over the separation of powers enshrined in the Constitution, spurring talk of a congressional vote to block Trump and ensuring that the president and Democrats will continue fighting over the border wall in Congress, the courts and on the campaign trail.

It triggered outrage from Democrats, unease among some Republicans and flew in the face of years of GOP complaints that President Barack Obama had over-reached in his use of executive authority.

Trump signed the declaration to justify diverting billions of federal dollars from military construction and other purposes after Congress approved only a fraction of the money he had demanded. The standoff over border funding had led to the longest government shutdown in history. To avoid another shutdown, Trump reluctantly signed a funding bill Friday that included just $1.4 billion of the $5.7 billion he had demanded for the wall. 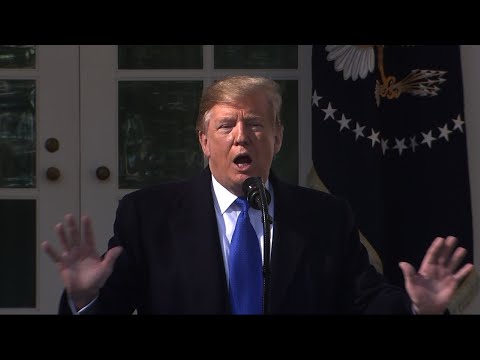 Trump announced the declaration in a free-wheeling, 50-minute Rose Garden news conference that included a long preamble about his administration’s accomplishments. He jousted with reporters and delivered a sing-song prediction about the fate of the order as it winds its way through the legal system before potentially ending up at the Supreme Court.

“Sadly, we’ll be sued and sadly it will go through a process and happily we’ll win, I think,” said Trump.

Within hours of Trump’s statement, the American Civil Liberties Union announced it would file suit challenging his emergency powers declaration.

“By the president’s very own admission in the Rose Garden, there is no national emergency. He just grew impatient and frustrated with Congress, and decided to move along his promise for a border wall ‘faster,’” said ACLU Executive Director Anthony Romero. Some Democratic state attorneys general have also threatened to go to court over the decision.

The text of Trump’s proclamation cited an increase in families coming across the border and an inability to detain families during deportation proceedings — not drugs or violence as the president outlined in his press conference. The top two Democrats in Congress said they’d use “every remedy available” to oppose what they cast as an unlawful measure.

“The President’s actions clearly violate the Congress’s exclusive power of the purse, which our Founders enshrined in the Constitution,” House Speaker Nancy Pelosi and Senate Minority Leader Charles Schumer said in a joint statement.

And Trump himself sent mixed messages as to its necessity. He wrote in the official proclamation that “Because of the gravity of the current emergency situation, it is necessary for the Armed Forces to provide additional support to address the crisis.”

But he seemed to tip his hand at a political motive when he said during the news conference, “I didn’t need to do this, but I’d rather do it much faster,” an admission certain to be cited during legal challenges.

Republicans had opposed Trump declaring a national emergency, repeatedly warning that it would set a bad precedent and divide the party when Democrats put it up for a vote. While many in the GOP on Friday fell in line behind Trump’s decision, others remain opposed.

“I don’t believe a national emergency declaration is the solution,” Sen Thom Tillis, R-N.C., said in a statement. “It wouldn’t provide enough funding to adequately secure our borders, it would likely get tied up in litigation, and most concerning is that it would create a new precedent that a left-wing president would undoubtedly utilize to implement their radical policy agenda while bypassing the authority of Congress.”

House Judiciary Committee Chairman Jerrold Nadler called for a hearing on the “serious constitutional and statutory issues” the declaration raises,

Congressional votes in coming weeks on a resolution blocking the emergency declaration were highly likely, but the timing was uncertain. Once a resolution is introduced, leaders by law cannot prevent votes on such a measure, which would need a simple majority to pass each chamber.

A resolution would all but certainly pass the Democratic-controlled House and may also pass the Republican-run Senate, if a few GOP senators break with Trump. Congress seemed unlikely to muster the two-thirds majorities needed in each chamber to override a certain Trump veto. But forcing him to cast his first veto on the issue would underscore internal divisions GOP leaders would rather avoid highlighting.

The money in the spending bill Trump signed would finance just a quarter of the more than 200 miles (322 kilometers) of barrier he wanted this year.

To bridge the gap, Trump announced that he will be spending roughly $8 billion on border barriers — combining the money approved by Congress with funding he plans to repurpose through executive actions, including the national emergency. Money for hundreds of military construction projects around the country was potentially targeted, and Democratic congressional aides were wary that projects sponsored by Democratic lawmakers might be disproportionately hit.

For all of Trump’s talk of a crisis, illegal border crossings are down from a high of 1.6 million in 2000, but those were mostly single men from Mexico. What’s on the rise now is the number of Central American families who come to claim asylum and can’t be easily returned to their countries. Some 50,000 families are crossing the border illegally each month — straining the U.S. asylum system and border facilities, which are not set up to manage the crush.

A number of Trump’s potential 2020 challengers condemned the national emergency, including Sen. Kamala Harris, D-Calif., who said, “We should do something about the actual emergencies that plague our nation — like climate change or health care access — not playing politics in order to build a wasteful border wall.”