ATLANTA (AP) — Georgia’s Republican governor announced Wednesday that he will appoint a wealthy businesswoman to the U.S. Senate, flouting President Donald Trump and highlighting a division within the GOP over whether moderate suburbanites or base voters are their key to victory in 2020 and beyond.

Gov. Brian Kemp’s selection of Kelly Loeffler pushed aside intense criticism from hardcore Trump advocates who said Loeffler is too moderate and inexperienced for the job. Many of those critics wanted Kemp to tap Rep. Doug Collins, one of Trump’s staunchest defenders in Congress.

The tension between Republicans underscores a divide within the party on how the GOP can best position itself for success in 2020: by firing up and turning out Trump conservatives or pivoting to try to win back suburban woman and moderates who have fled the party since Trump’s election. Kemp’s selection of Loeffler, and the support she’s received from Senate leadership, signals that party leaders recognize the perils of catering to the right and hitching every wagon to the president.

At the same time, Kemp and Loeffler moved quickly to fend off any challenge from the right, pitching the little-known candidate as a true Trump supporter and emphasizing her rural roots.

“I’m a lifelong conservative, pro-Second Amendment, pro-Trump, pro-military and pro-wall,” Loeffler said. “I make no apologies for my conservative values and I look forward to supporting President Trump’s conservative judges.” 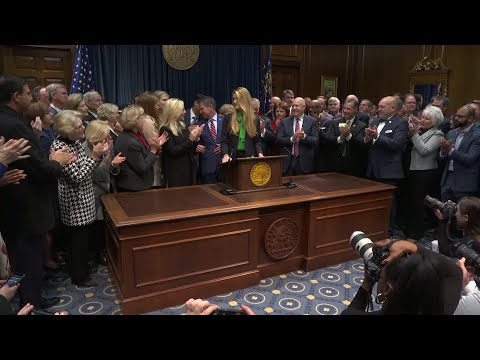 Loeffler has been embraced by Senate GOP leadership, which — combined with her ability to pump millions of her own money into a campaign — could make any top-tier Republican candidate rethink plans to run against her for the seat. Senate Majority Leader Mitch McConnell called her “a terrific appointment.”

Loeffler will succeed three-term Sen. Johnny Isakson, who is stepping down at the end of the month because of health issues. She will be only the second woman in history to represent Georgia in the U.S. Senate.

The internal GOP divisions come down to “a difference in philosophy over how to win,” said Kerwin Swint, director of the school of government and international affairs at Kennesaw State University.

“Trump wants Collins obviously for his steadfast support of him, but Trump also believes in the base strategy of winning elections. That’s how he won, that’s how Kemp won,” Swint said. “Kemp understands that that’s how he won, but he looks at what’s happening in Georgia, the changing demographics, particularly female voters in metro Atlanta, and so I think his strategy and his thinking is, how long can we rely on this base strategy to win?”

Republicans have been struggling to hold on to suburban and women voters in the Trump era. Recent elections in Kentucky, Virginia and Louisiana, provided fresh evidence of the trend — revealing unexpected Democratic strength in the growing and diversifying neighborhoods outside cities, places that were once solidly Republican.

In Georgia, the suburbs shifted away from Republicans in last year’s midterms, handing Democrats a win in territory once held by Republican House Speaker Newt Gingrich. Women appeared to be driving the move.

The seat will be up for grabs in a November 2020 special election for the final two years of Isakson’s term, and then again in 2022. Also on next year’s ballot will be Republican Sen. David Perdue, who is running for a second full term.

With both of Georgia’s GOP-held Senate seats on the ballot alongside Trump in 2020, the race is raising the state’s profile as a political battleground where Republicans still dominate but Democrats have made substantial inroads in recent elections.

Trump made clear that he preferred Collins to Loeffler, but has resigned himself to the pick, according to a person familiar with his thinking who spoke on the condition of anonymity in order to describe the private discussions.

Democrats, meanwhile, hope to capitalize on dissatisfaction with Washington and break the GOP’s hold on the Deep South. They’re spending big in Georgia, where demographic changes making the state less rural and more diverse could create opportunities for an upset.

Democrat Matt Lieberman, the son of former U.S. senator and vice presidential candidate Joe Lieberman, is campaigning for the seat, and several other Democrats are mulling potential bids.

In September, Kemp took the unusual step of opening an online application process for Isakson’s Senate seat and asked everyone from congressmen to ordinary Georgians to apply.

The governor’s office was soon flooded with hundreds of applications. Many were sincere. Others, like one submitted for Kermit the Frog, were not.

Loeffler submitted her application just hours before the online portal was closed, prompting speculation that she may have done so at Kemp’s urging.