KARPENISI, Greece (AP) — In the mountainous Evrytania region of Greece, fir trees cover the hills, deer and wolves roam the lush landscape and waterfalls add to the dramatic scenery, earning it the nickname “Little Switzerland.”

Harder to find, however, are young people.

The area — a winding, three-hour drive from Athens — has the oldest population in the whole European Union. Residents are 54.3 years old on average.

As balloting for the European Parliament gets underway Thursday, voters over 55 are emerging as a powerful bloc on a rapidly aging continent where younger voters are staying away from the polls in growing numbers. The pensioners in Karpenisi will vote Sunday with other Greeks in a combined ballot that includes local government posts.

“Now only the old people are left,” says 91-year-old Costas Thymios, taking a break from a backgammon game in a community center in the town of Karpenisi. “There are no jobs left and we don’t produce anything anymore. The region is finished.”

Greece has one of the oldest populations in the world, with an average age of 44.5 years, said Kyriakos Pierrakakis, director of research at the Athens-based thinktank diaNEOsis.

Of the 25 fastest-aging countries in the world, all are in the EU except for two — Japan and Switzerland, according to the World Health Organization.

Across the street from the community center in Karpenisi, 36-year-old civil engineer Eftihia Papadimitriou is campaigning for a seat on the municipal council, with her 8-year-old daughter in tow. Most of her canvassing is done face-to-face in remote villages, some served by public transportation only once a month. 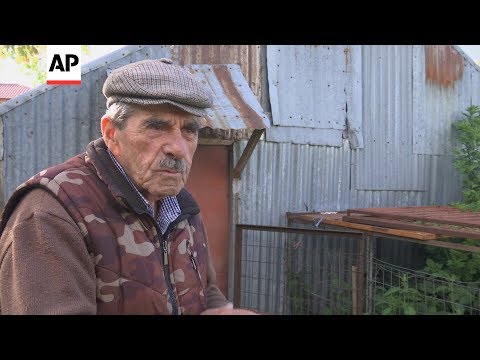 “People want you to remember what you’ve told them and who they are. That way, they can tell you really are trying to address their needs,” she said.

In Athens, the need for political parties to reach out to older voters has spurred a revival of traditional campaigning, too. Election kiosks are set up in main squares and metro stations, and TV and newspaper ads for the election are flourishing. Rallies and televised debates by candidates take place daily.

“The content of campaign messages is mainly aimed at older people, so you’ll see references that remind you of the 1980s and the 1990s, with big outdoor events and things like that,” said Vasileios Katsardis, an adviser and press officer for the left-wing GUE-NGL group at the European Parliament.

The large numbers of political ads on Greek TV are signs that “Europe is aging, and that older people care more about elections,” he said.

“That is sad, but it’s a fact,” Katsardis said. He added that political parties are also devising strategies targeting younger voters, including mostly online ads and on social media.

Overall turnout for European parliamentary elections has been below 50% for the past two decades, falling steadily since they were first held in 1979, when participation reached 62%.

The decade-long financial crisis in Greece has seen more than 500,000 people — nearly 5 percent of the population — leave the country to find work.

The International Monetary Fund identified demographic problems as the country’s biggest challenge, with the working age population expected to shrink by close to 40% by 2070, more than three times the average decline expected for countries using the euro currency.

“The projection is that Greeks will grow older by midcentury, that we will surpass an average age of 50 years old,” said Pierrakakis, the researcher. “This will have a big set of implications for the economy, for the pension system, and for many other aspects of social life overall.”

Residents of Evrytania take little comfort in the growing strength of the gray vote, and feel they have little power to change the area’s ongoing decline.

Thymios and his retired friends, most in their 80s, offered a plethora of reasons for Evrytania’s decline — from the demise of its once-booming timber industry, to the decision to improve roads that ultimately made it easier for young people to see the world and move away.

Thanassis Lepeniotis, an 83-year-old cattle farmer, has no buyers for his small herd of goats.

“The elderly suffered in this place for so many years,” he said. “They helped to educate their children, who ended up moving away. That’s why it’s deserted here. And the old people are dying.”

Full coverage of the European Parliament elections at https://www.apnews.com/EuropeanParliament