How to get a mullet, and popping career, like Morgan Wallen

The 26-year-old, whose grandfather was a barber, confidently rocks the hairdo, which he said he decided to try after seeing old photos of his dad proudly rocking a mullet.

“Whenever my parents got married, my dad had a mullet. Me and my dad are very similar-type people with the way we look and the way we act, and I figured if he could get away with it when he was around 25, then I could try to do the same thing,” Wallen said.

During a trip to the Paul Mole barbershop — which claims to be the oldest shop in New York City at 106 years old — Wallen’s hair stylist, Amy Georgulis, gives the performer a fresh haircut, as they trade thoughts on how much to trim.

“It definitely has become a thing as far as I know. If you come to my shows or if you see a lot of fans or things that I’m tagged in, I’ve seen a lot of people with similar mullets and it’s pretty cool,” he said. “I didn’t really expect it to be become (a thing).”

But Wallen’s mullet isn’t overshadowing his success in music: “Whiskey Glasses,” the third single from his 2018 debut album “If I Know Me,” became a sleeper hit and topped Billboard’s Hot Country Songs chart for two weeks this year. The song is just one of three country tunes to reach the Top 20 of the all-genre Hot 100 chart this year. 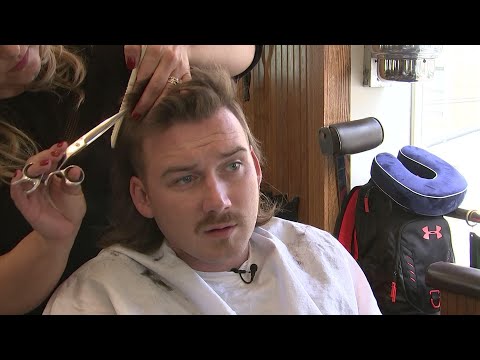 Morgan Wallen took a trip to Paul Mole Barbershop in New York City to get his signature mullet trimmed and chat about his music.

And this week Wallen — who competed on “The Voice” in 2014 and co-wrote songs for Jason Aldean and Kane Brown — earned a nomination for new artist of the year the Country Music Association Awards. He’s currently performing on the road with Florida Georgia Line, he’ll open up for Luke Combs’ fall tour and he just dropped a new collaboration with Grammy-winning DJ-producer Diplo.

“It’s been a good year,” he said with a smile on his face.

Wallen was raised in Sneedville, a small town in Tennessee with less than 1,500 people. He grew up listening to lots of different music: Because his father was a preacher, he was into Christian and gospel music, but he loved classic rock and bands like the Eagles.

But he never imagined a career in music: “I played baseball my whole life. I end up getting hurt. And that’s when I kind of started writing music to kind of get my feelings out.”

In an interview with The Associated Press, after getting his fresh haircut, Wallen spoke about his mullet and his music.

AP: Did you have a mullet as a kid?

Wallen: No. I had a bowl cut. That was pretty bad. Definitely a bowl cut. And I used to have blond, like really, really, blond hair when I was a kid. So blond bowl cut — that’s what I was rocking when I was a little kid.

AP: What did you think when you first got a mullet?

Wallen: I liked it. We kind of shaped it really, so I didn’t really have a mullet at first. It was just like an idea and we had to cut it to where it would grow into a mullet. ...It took a few months until it grew into a mullet; I think probably around six months before you could actually see what I was trying to do. Before those six months you might have wondered like, “What is this guy doing?” But you might still wonder that (laughs).

AP: Did you think “Whiskey Glasses” would become a No.1 hit?

Wallen: It’s one of the songs that I had a good feeling about before we put it out just because I saw the reaction live before it was a single. I saw that people were really naturally just drawn to it ... and it’s just been cool to see the relation people have made to that song. It’s been awesome and we’ve gone from playing shows where there wasn’t hardly anybody there to a drastic change with the amount of people being there.

AP: You’ve written a lot of songs but you didn’t write “Whiskey Glasses.” Did the song remind you of your own life?

Wallen: Yeah. I mean, I didn’t necessarily (think of) one breakup when I was recording it, when I was singing it, but I think we’ve all been at a place in our life, whether it’s a breakup or whether it’s just something that happened, and you didn’t want to think about it at that moment in time. And that’s definitely something I felt I had been through and I figured a lot of people would have agreed.

AP: Can you recall a time you regretted drunk-dialing or sending a drunken text?

Wallen: I don’t do that a whole lot actually. I’m trying to think if there’s been a certain one that’s been embarrassing to me. Probably more so, like not necessarily heartbroken, but like FaceTiming Luke Bryan at like 5 in the morning. That’s probably worse. He didn’t answer, to say the least (laughs). We’re buddies though.

AP: Is whiskey your preferred drink?

Wallen: Yeah. I like whiskey and I like vodka, too. And beer. And tequila. Actually, I’ll take tequila shots every once in a while but it’s not my favorite anymore.

AP: Pop fans have gravitated toward “Whiskey Glasses” — did that surprise you?

Wallen: I definitely didn’t expect that with this song. Just because I feel like it’s really country. It definitely is. The subject matter, the sounds, everything that we used. But I think it’s just a fresh-sounding song with the phrasing and the rhythm and all of the production that we used, so it doesn’t completely shock me. But it is cool that I’ve noticed a lot of people who say, “I don’t listen to country music but I like ‘Whiskey Glasses.’” And they’ll start listening to other songs of mine. It’s cool to be able to relate to people who aren’t necessarily from the same way of life as me or don’t even maybe know what I’m talking about in some of my songs. It’s just cool that music has that ability to do that.