HAMPTON, N.H. (AP) — Joe Biden said Monday that he would be open to breaking up Facebook, a sign of the deep skepticism among many Democratic presidential contenders about the power of massive technology firms.

In an interview with The Associated Press, the former vice president, who is now running for the White House, said that dismantling large technology companies including Facebook is “something we should take a really hard look at.”

His 2020 rival, Sen. Elizabeth Warren of Massachusetts, has been the most outspoken Democratic presidential candidate to press for greater regulation of Silicon Valley’s most prominent companies. While Biden didn’t fully embrace her proposal — saying it’s “premature” to make a final judgment — he praised Warren and said she “has a very strong case to be made” for cracking down on tech giants.

The comments demonstrate how Facebook is increasingly a flashpoint in the campaign for the Democratic presidential nomination, with some candidates arguing the influence of such companies is unchecked, allowing misinformation to poison the public debate. Sen. Kamala Harris of California said this weekend that she was open to revamping Facebook, telling CNN the company is essentially a public utility. But Sen. Cory Booker of New Jersey told ABC that such calls aren’t very different from the tough tactics President Donald Trump takes against his enemies. 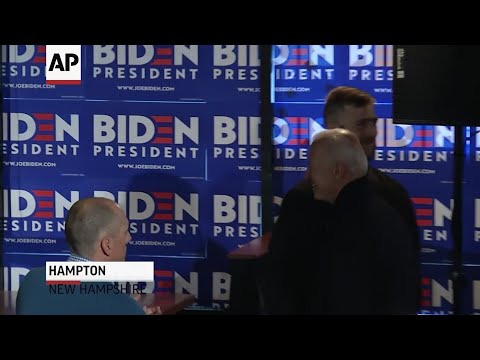 Regardless of whether Facebook is ultimately broken up, Biden told the AP, the Trump administration hasn’t done enough to enforce antitrust laws in a variety of industries.

The former vice president is making his first trip to New Hampshire this week as a declared candidate for the 2020 Democratic nomination. He’s dominating the early polls but faces questions about whether he can keep the momentum going after two previous presidential campaigns faltered.

The New Hampshire swing comes amid a rapidly escalating trade war between the U.S. and China that has left financial markets spinning and many observers uncertain about what will happen next. Biden’s past support for free trade deals such as the North American Free Trade Agreement could prove to be a vulnerability among the blue-collar union workers he’s targeting, especially in the upper Midwest, where such pacts have become unpopular.

Biden said he didn’t regret voting for NAFTA during his time in the Senate.

“Fair trade is important,” Biden said. “Not free trade. Fair trade. And I think that back in the time during the Clinton administration, it made sense at the moment.”

Biden is competing in a field that’s been celebrated for its historic gender and racial diversity. He said there are women currently running for president who would be qualified to lead the presidential ticket next year, but he wouldn’t fully commit to selecting a woman as his running mate if he becomes the Democratic presidential nominee.

“I wouldn’t hesitate to pick a woman if that person is the most qualified person available,” Biden said. “I would place no restriction, were I the nominee, on anyone I’d pick, assuming they had the same basic philosophic view of the world as I do.”

It’s important, Biden said, for the nominee to pick a running mate “in line with what they believe ... so you can work as a team.”

And if he doesn’t get the nomination, Biden didn’t dismiss the idea of working in a future Democratic administration.

“I learned a long time ago, don’t rule out anything,” Biden said. “If I can be helpful if I weren’t the nominee, I would do whatever I could.”

Biden also addressed questions about a potential conflict of interest stemming from his son’s work for a Ukrainian gas company while Biden was vice president. The New York Times has reported Biden pressured Ukraine’s government to dismiss a top prosecutor believed to be tolerating corruption. The prosecutor was looking into the firm, Burisma Holdings. Biden denied Hunter Biden’s work for the company had anything to do with the effort.

“We never once discussed it when he was there,” the former vice president said of his son. “There’s not a single bit of evidence that’s been shown in any reporting that’s been done that he ever talked about it with me or asked any government official for a favor. ... I have great confidence in my son. He’s a man of great integrity.”

Trump’s lawyer, Rudy Giuliani, scrapped plans this week to visit Ukraine in part to find information that could damage political rivals, including Biden. The former vice president dismissed such efforts.

“When folks like the president and Rudy Giuliani roll through one time selling snake oil, maybe people buy it,” he said. “Second time around, they kind of catch on.”