NEW YORK (AP) — Actor Taylor Kitsch bristles at the notion that the criminal he plays in the new police drama “21 Bridges,” is a cold-blooded killer.

He says he worked to find the “emotional beats” of his character, Ray, and tried to understand the reasons he might do some unsavory things.

That might be why director Brian Kirk and producer and star of the film, Chadwick Boseman, wanted Kitsch for the part. That, and the fact that he’s an expert at handling an automatic weapon.

“21 Bridges” is about a police detective (Boseman) leading a manhunt in New York City to find two suspects who planned to steal a haul of cocaine but stumble into a larger conspiracy and end up killing several cops.

The film, which also stars Stephan James and Sienna Miller, takes place over the course of one night, with plot twists, chase scenes and shootouts to satisfy action fans.

In an interview with The Associated Press, Kitsch, 38, talked about finding the nuances in playing complicated characters, working with Boseman and what it would take to get him to go back to his “Friday Night Lights” character, Tim Riggins.

AP: How did you approach playing Ray, who many would think is a bad guy.

Kitsch: “(Director) Brian Kirk was awesome and very collaborative and freeing and kind of just gave me the responsibility, gave me the reins to just create him and that’s what I loved about it…. My job is to really root and try to figure out why he is the way he is. 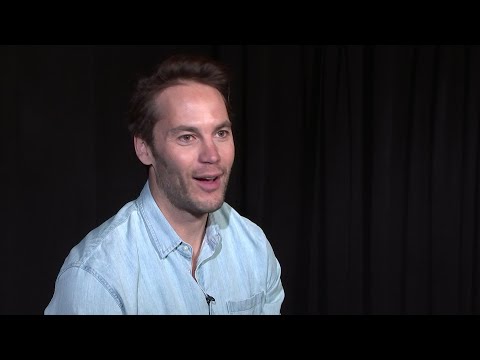 AP: Ray and Stephan walk into a very scary situation, but Ray keeps his cool.

Kitsch: I know a lot of (Navy) SEALS. I’ve been trained by them, and a lot of special ops guys and everything about them I admire. The beauty of those guys is their heart rate doesn’t go up. It really, honestly doesn’t in those moments.… Ray is very, very similar, where they just take a breath and they go. And that’s fascinating to me... He’s just very calm, very directed as to what he has to do and carry out. And I love that. Because you can play the other way and go crazy and yelling, and that’s very stereotypical to me and cliché and boring.

AP: You seemed very comfortable shooting big guns. Was that because you used them while making the 2013 military action film “Lone Survivor”?

Kistch: My dad hunted but I never liked guns growing up. One, I think everybody should learn to at least be able to make a gun safe. “Lone Survivor” was an insane and incredible experience to be trained by the best and now I’m really comfortable with an M4 or a Glock or any handgun. I never thought I’d say that, but that tool has carried me through a lot of these things and obviously it serves for Ray.

AP: How was working with Chadwick Boseman and how involved was he in his role as producer?

Kitsch: He had a good presence on set. We were working nights and, man, I’d be sleeping if I were him because you got to get it when you can. But he would come on his off days and be there with us and just support. The best producers are the ones that you don’t feel their presence so much on set. They facilitate and let you do your thing. And he’s great. You know, very gracious guy, listens really well on and off camera. He’s very humble and just a sweet guy.

AP: You seem to be intense about your work. What do you do in your free time?

Kitsch: I’m learning guitar… so I still play an hour or two a day. Hockey — very Canadian — twice or three times a week hopefully, and I live on the lake (in Austin, Texas) so I try to get on the water when the sun lets me. Pretty standard stuff. Try to decompress from jobs and build yourself back up. I’ll go on a little photography thing through Wyoming, Montana and Bamph. If I’m not acting, I have to have that creativity somehow or I’ll go crazy.

AP: We are in an era of reboots. Any chance you’d reprise your role if there was a reboot of “Friday Night Lights?”

Kitsch: I know they’re making a movie but I’m not going to be in that. There’s no way. If you want to give me $25 million I’ll do it, but that’s my price (Laughs). I pride myself on that moment. But I also want to create more new moments and keep growing and I feel I’ve done that. It would be messing with a beautiful memory. And I’m such a different person, different actor. And I don’t even know if I could create that again, that innocence of Riggs and those moments. It was a special time and you got to leave that.