DAVENPORT, Iowa (AP) — Seeking to leverage his experience in foreign policy, Democratic presidential candidate Joe Biden on Wednesday ripped Donald Trump’s withdrawal of U.S. military forces from Syria as the latest proof that the president is a “complete failure” who is gutting American credibility around the world.

Biden used a 40-minute speech in Iowa to excoriate Trump for withdrawing American forces and leaving Syrian Kurds, key U.S. allies in the yearslong fight against the Islamic State group, open to attacks from Turkey.

“It’s more insidious than the betrayal of our brave Kurdish partners; it’s more dangerous than taking the boot off the neck of ISIS,” the former vice president said. “Trump is demolishing the moral authority of the United States of America” while emboldening U.S. adversaries, including Russia and Iran.

Biden’s speech marks his latest attempt to push foreign affairs to the front-burner of the 2020 campaign. The core of Biden’s message to voters from the start has been that Trump is unfit for the job, and Biden often references foreign affairs as he campaigns, but the 76-year-old candidate and his aides see the Syria situation as a new crystallization of what’s at stake. 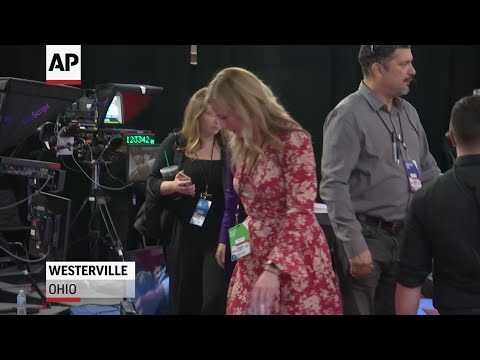 Biden forecast a domino effect for Trump’s decision and his isolationist approach in general. “Who will stand with us” in the next international crisis, Biden asked, “if the United States is reduced to an unreliable partner?”

Trump’s “incompetence,” Biden said, demands that he be replaced by someone who “on Day One is ready to command the world stage” and rebuild a world order. “There’s not going to be time to build relationships from scratch,” he said, adding that he can “pick up the phone, call our NATO allies, know them by their first name.”

The former vice president tacitly brought his top primary rival, Elizabeth Warren, into his argument, as well. Without naming her, Biden referenced an opponent saying in Tuesday night’s Democratic debate that she’d withdraw troops from the Middle East.

Warren didn’t go into detail then but said, “I don’t think we should have troops in the Middle East.” Her campaign later clarified that she meant combat troops. Warren has said previously that she wants to withdraw troops from Afghanistan, Iraq and Syria. Withdrawing troops from the entire region would go further and end generations of U.S. presence in the volatile region.

“We can be strong and smart at the same time. And when we do draw down, there’s a right way and a wrong way,” Biden retorted in Iowa.

For his part, Biden has promised to stop “endless wars” in the region, but with qualifications. He advocated in a sweeping foreign policy address in July for removing most combat troops from Afghanistan in favor of “narrowly focusing our mission” in the region, but he was careful to say that military force would always be an option in his White House.

And he outlined again Wednesday a vision of the U.S. leading world alliances with diplomacy and military strength while mocking Trump’s isolationist tendencies and his embrace of U.S. adversaries like Russia and North Korea.

Instead, the former vice president said, “leading the free world requires us to show up, have some skin in the game” with investments that yield open markets for U.S. products while providing security for Americans at home and abroad.

Biden recalled that as vice president he negotiated on behalf of President Barack Obama with Turkey’s Erdogan, Kurdish forces and other Middle Eastern players who were part of a “global alliance” to fight the Islamic State group.

Biden highlighted Trump’s sanctions on Turkey as more evidence of the consequences of an “erratic” president because he said it allows Putin to expand his influence in the region amid increasing tensions between two NATO allies — the U.S and Turkey. Russia is not a member of NATO, and Putin has sought to weaken the group.

“Don’t believe Trump’s con here. This is not American leadership,” Biden said. “And this is not the end of forever wars. It’s a recipe for more forever wars.”

Ann Cassidy Pfifner, a 66-year-old retired nurse from Long Grove, Iowa, said she came to the event with a short list including Biden, Warren and Sen. Amy Klobuchar. She came away as a Biden supporter.

“He’s just right-on as far as foreign policy,” she said. “That’s the thing he knows. And I think it’s what we needed to hear because we haven’t really heard that yet from a candidate.”