US looks for options as embattled Venezuelan leader hangs on

WASHINGTON (AP) — U.S. officials have been predicting for months that embattled Venezuelan President Nicolas Maduro would soon give up power in the face of economic sanctions and a coalition of more than 50 nations calling for him to step down.

But it hasn’t worked out that way.

Despite the sanctions, Maduro clings to power with help from Russia, China and Cuba. The international coalition that supports the opposition stands at 54 nations, although some longtime U.S. allies have refused to join the Trump administration in recognizing the head of the National Assembly, Juan Guaido, as interim president.

“We are continuing to push,” Secretary of State Mike Pompeo told the Senate Foreign Relations Committee on Wednesday. “We are trying to bring more to the coalition of 54, and we are trying to get those 54 to impose sanctions that match the ones that the United States has imposed.”

Pompeo is scheduled to take that message on the road starting Thursday as he visits Chile, Paraguay, Peru and Colombia. All four have joined the 14-member “Lima Group” of nations in support of Guaido. But the secretary will be asking for them to take additional steps to persuade Maduro to step down and allow a new election in the troubled country.

So far, Lima Group nations have taken in hundreds of thousands of refugees fleeing Venezuela’s economic collapse and have issued statements condemning Maduro but done little else, said Benjamin Gedan, a Latin America expert at the Wilson Center, a Washington think tank specializing in global issues. 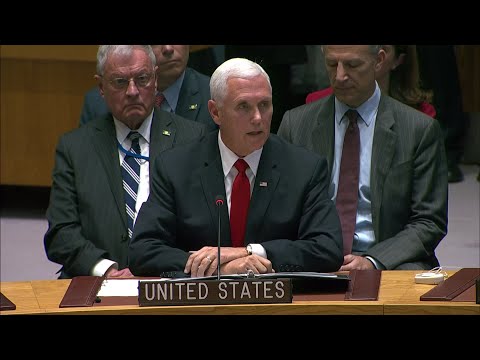 “The Lima Group has mostly threatened coordinated sanctions but hasn’t carried them out,” Gedan said. “They have exhausted the diplomatic route.”

The U.S. and other countries in the coalition do not recognize Maduro as the legitimate president of Venezuela, arguing that his re-election last year was irrevocably marred by fraud. Russia, Cuba and China have well-established economic and political relationships with the once-prosperous oil-producing nation, and many countries have chosen to stay on the sidelines of the dispute.

On Wednesday, Vice President Mike Pence led a failed attempt to win U.N. Security Council recognition of Guaido. He said the Trump administration is determined to remove Maduro from power, preferably through diplomatic and economic pressure, but repeated the apparent threat of military action by adding that “all options are on the table.”

Venezuelan Ambassador Samuel Moncada said his country is threatened with war by the Trump administration, “and the ground is being laid for an invasion.” He told the council: “We must stop this war of Donald Trump.”

War talk aside, the State Department said Pompeo’s goals are diplomatic. In a statement, they said the secretary would use the four-country trip “to celebrate and reinforce shared commitments to democracy and human rights, highlight increased opportunities for prosperity and security for our citizens, and rally support for democracy in Venezuela.”

Pompeo will be the first secretary of state to visit Paraguay since 1965 and will wrap up his trip in Cucuta, Colombia, a city on the Venezuelan border where U.S. humanitarian aid for Venezuela has been piling up because Maduro won’t allow it into the country.

Privately, U.S. officials acknowledge frustration at the slow pace of the push to remove Maduro and win new recruits to the coalition against him. It’s not for lack of trying.

Pence, Pompeo, Elliott Abrams, the special representative for Venezuela, and other officials have lobbied hard to expand the group. They have targeted specific nations, particularly U.S. allies such as Italy, Greece and Turkey, but have not succeeded.

Closer to home, Mexico has been unwilling to join, siding with Maduro and his supporters in Cuba, Nicaragua and Bolivia.

Even as the U.S. seeks new members, the U.S. must reassure those who have joined the coalition to stay on board, said Michael Shifter, president of the Inter-American Dialogue.

″(Pompeo) needs to rally the coalition and answer questions about whether this is really going to work,” Shifter said. “He really needs to send a message that it’s going to take a little longer than initially anticipated, but you have to stick with it.”

Michael McCarthy, a research fellow at American University’s Center for Latin American and Latino Studies and editor of the Caracas Wire, likened the impatience to Guido’s followers and nervous neighbors “tapping their fingers” and wondering, “When is this going to translate into what we designed it for?”

“It’s a problem of managing expectations,” McCarthy said. “This struggle is going to require sustained pressure and optimism and, without concrete gains along the way, the base of the opposition may grow disenchanted.”