The Latest: Prosecutor wants 5 to 10 years for Cosby

Prosecutors are asking a judge to sentence Bill Cosby to five to 10 years in prison for drugging and sexually assaulting a woman at his suburban Philadelphia home.

Montgomery County District Attorney Kevin Steele said in court Monday that the 81-year-old comedian is still capable of slipping women drugs and assaulting them. He says the sentence should send the message to others that “nobody’s above the law.”

Cosby’s lawyers are trying to keep him out of prison, calling it an “excessive hardship.”

Court has adjourned for the day. The judge is expected to sentence Cosby on Tuesday. He could get up to 30 years in prison.

Bill Cosby’s lawyer says the 81-year-old comedian is a poor candidate for prison because he’s old, legally blind and dependent on others.

Defense lawyer Joseph Green argued at Cosby’s sentencing hearing Monday that Cosby would be at risk behind bars. He called prison an “excessive hardship.”

Green suggested an alternative punishment program would be more appropriate. 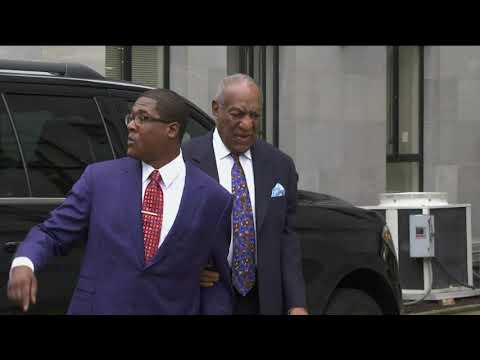 Court has adjourned for the day. A judge is expected to sentence Cosby on Tuesday.

Cosby’s lawyer says a psychologist set to testify Tuesday will be the only defense witness at the comedian’s sentencing.

Cosby could get up to 30 years in prison for drugging and molesting a woman in 2004, though sentencing guidelines suggest a range of one to four years is more likely.

The woman Bill Cosby was convicted of drugging and molesting says she wants “justice as the court sees fit.”

Andrea Constand testified Monday at Cosby’s sentencing hearing outside Philadelphia. She was on the witness stand for just two minutes but submitted a much lengthier victim-impact statement that wasn’t read in court.

Cosby was convicted of knocking Constand out with pills and violating her at his suburban mansion in 2004.

Her parents and sister told Judge Steven O’Neill on Monday that the assault had taken an immense emotional toll.

Constand’s mother, Gianna, says Cosby had “protected himself at the cost of ruining many lives.”

Cosby’s lawyer says a psychologist set to testify Tuesday will be the only defense witness at the comedian’s sentencing.

Cosby faces the possibility of years in prison.

Andrew Wyatt spoke to reporters as he walked into a suburban Philadelphia courthouse Monday afternoon. Cosby’s in court to be sentenced for drugging and molesting a woman at his home in 2004.

Wyatt says Cosby’s team is telling him to “stay strong and stay focused.” He said Cosby’s in “great spirits.”

Cosby became known as America’s Dad for his role as Dr. Cliff Huxtable on the top-rated “Cosby Show.” Wyatt says “they won’t ever take that away. You can’t take away the legacy.”

Some 60 women have accused Cosby of sexual assault, but only one case went to trial. Cosby was convicted in April and faces years in prison.

None of the other accusers who testified at Bill Cosby’s sexual assault retrial will take the stand at his sentencing hearing.

Cosby was convicted of sexually assaulting a Temple University women’s basketball administrator in 2004. Five other women who say Cosby molested them also testified at the April retrial.

Prosecutors had hoped to have some of the other accusers address the court at sentencing to paint Cosby as a serial sexual predator deserving of prison. But the district attorney’s office told The Associated Press on Monday they would not be taking the stand.

The 81-year-old comedian faces years in prison for drugging and assaulting Constand in his suburban Philadelphia home.

A Pennsylvania state board psychologist says evidence shows Bill Cosby has an uncontrollable urge to violate young women and would likely reoffend if given the chance.

Kristen Dudley testified Monday at a hearing to determine whether Cosby should be classified as a “sexually violent predator” under a state law, which would mandate community notification of his whereabouts and lifetime counseling.

The 81-year-old comedian was convicted of drugging and molesting a woman at his suburban Philadelphia home in 2004. He’s scheduled to be sentenced at the conclusion of this week’s hearing.

Dudley says the assault fits a long pattern of predatory behavior by the former “Cosby Show” star. Dudley says Cosby declined to meet with her, but she made her determination after reviewing police reports and trial transcripts.

A judge is weighing whether to hold a hearing to determine if Bill Cosby is a sexually violent predator.

Cosby is in a suburban Philadelphia courtroom Monday for the start of his sentencing hearing. He was convicted in April of drugging and molesting a woman in 2004.

A state board has recommended that Cosby be classified a sexually violent predator, which would mandate community notification of his whereabouts and lifetime counseling. His lawyers are arguing the law is punitive and unconstitutional.

Judge Steven O’Neill is considering whether to hold a hearing on the matter.

Bill Cosby’s chief accuser has arrived at a courthouse outside Philadelphia for a sentencing hearing for the 81-year-old entertainer convicted of sexually assaulting her.

Former Temple University women’s basketball administrator Andrea Constand testified that Cosby knocked her out with pills, then molested her during an encounter at his home in 2004. A jury convicted Cosby of three felony counts. He faces up to 30 years in prison, though state guidelines suggest a sentence of one to four years.

Some 60 women accuse the former “Cosby Show” star of sexual assault, though Constand’s case is the only one that went to trial.

Bill Cosby has arrived at a suburban Philadelphia courthouse for the start of a hearing that will determine the punishment for the 81-year-old comedian convicted of sexual assault.

Cosby, the first celebrity to go to trial in the #MeToo era, was convicted of drugging and molesting a Temple University women’s basketball administrator at his home in 2004. He faces a sentence of probation up to 30 years in prison. State guidelines suggest a one- to four-year sentence.

The two-day sentencing hearing will begin with testimony about Cosby’s sex offender evaluation and whether he should be deemed a sexually violent predator. That would make him subject to lifetime counseling and community notification.

The former “Cosby Show” star was convicted in April following a retrial.

The woman Bill Cosby is convicted of drugging and sexually assaulting has tweeted a Bible verse about letting go of anger.

Andrea Constand tweeted Ephesians 4:26 early Monday, hours before Cosby’s sentencing hearing was to get underway. He could be sentenced to as many as 30 years in prison.

Her tweet was: “Be wrathful, but do not sin; do not let the sun set while you are still angry; do not give the Devil an opportunity.”

Cosby could be the first celebrity of the #MeToo era to go to prison after being convicted in April of drugging and sexually assaulting Constand at his suburban Philadelphia home in 2004.

Prosecutors hope to call some of his other accusers to paint Cosby as a sexual predator deserving of prison.

Bill Cosby is facing the start of a sentencing hearing at which a judge will decide how to punish the 81-year-old trailblazing comedian who preyed on at least one young woman and perhaps many more.

Cosby was the first celebrity to go to trial in the #MeToo era and could be the first to go to prison after being convicted in April of drugging and sexually assaulting former Temple University athletics employee Andrea Constand at his suburban Philadelphia home in 2004.

At the end of the two-day hearing starting Monday, Montgomery County Judge Steven T. O’Neill could sentence Cosby to as many as 30 years in prison or send him home on probation.

The state guidelines for someone like Cosby, with no prior convictions, call for about one to four years behind bars.