EL PASO, Texas (AP) — The Latest on the prosecution of a man accused of fatally shooting 22 people in an attack at a Walmart in El Paso, Texas (all times local):

Attorneys for the man charged with capital murder in the mass shootings at an El Paso Walmart store appealed to the public to keep an open mind about their client.

Mark Stevens of San Antonio is lead defense attorney for Patrick Crusius. He told reporters after Crusius entered a not-guilty plea Thursday in state district court in El Paso that “there are two sides to this story” and that the defense team intends to contrast those stories in court.

A 21-year-old man has pleaded not guilty to capital murder in the fatal shooting of 22 people at a West Texas Walmart.

Patrick Crusius entered the plea Thursday during his first appearance before a trial judge in El Paso. Police have said Crusius confessed to targeting Mexicans in the Aug. 3 attack in the largely Latino border city. 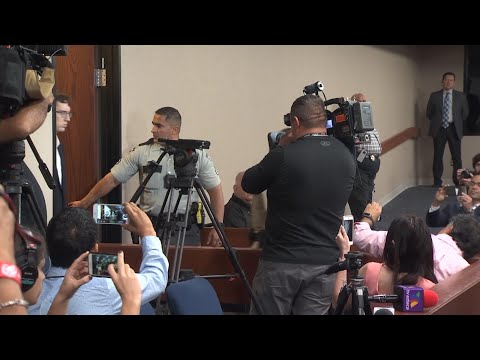 Prosecutors have said they will seek the death penalty for Crusius.

Most of those killed in the shooting had Hispanic last names and eight were Mexican nationals. The Department of Justice has called it an act of domestic terrorism.

Some two-dozen people were injured in the attack. Hospital officials say two of them remain hospitalized.

The attack came hours before another mass shooting that killed nine people in Dayton, Ohio.

The 21-year-old suspect in the fatal shooting of 22 people at a Texas Walmart is set to face his trial judge for the first time since his arrest.

Patrick Crusius of Dallas is expected to appear in an El Paso courtroom Thursday for a brief hearing.

Police say he confessed to the Aug. 3 mass shooting and that he carried out the attack targeting Mexicans. Some two-dozen people survived the attack with injuries; Hospital officials say two victims are still in the hospital.

Local prosecutors say they will seek the death penalty. Federal authorities are also considering capital murder charges and are investigating possible hate crimes charges. The Department of Justice has called the shooting an act of domestic terrorism.