HOUSTON (AP) — Years before a bystander’s video of George Floyd’s last moments turned his name into a global cry for justice, Floyd trained a camera on himself.

“I just want to speak to you all real quick,” Floyd says in one video, addressing the young men in his neighborhood who looked up to him. His 6-foot-7 frame crowds the picture.

“I’ve got my shortcomings and my flaws and I ain’t better than nobody else,” he says. “But, man, the shootings that’s going on, I don’t care what ’hood you’re from, where you’re at, man. I love you and God loves you. Put them guns down.”

At the time, Floyd was respected as a man who spoke from hard, but hardly extraordinary, experience. He had nothing remotely like the stature he has gained in death, embraced as a universal symbol of the need to overhaul policing and held up as a heroic everyman.

But the reality of his 46 years on Earth, including sharp edges and setbacks Floyd himself acknowledged, was both much fuller and more complicated.

Once a star athlete with dreams of turning pro and enough talent to win a partial scholarship, Floyd returned home only to bounce between jobs before serving nearly five years in prison. Intensely proud of his roots in Houston’s Third Ward and admired as a mentor in a public housing project beset by poverty, he decided the only way forward was to leave it behind.

“He had made some mistakes that cost him some years of his life,” said Ronnie Lillard, a friend and rapper who performs under the name Reconcile. “And when he got out of that, I think the Lord greatly impacted his heart.”

Floyd was born in North Carolina. But his mother, a single parent, moved the family to Houston when he was 2, so she could search for work. They settled in the Cuney Homes, a low-slung warren of more than 500 apartments south of downtown nicknamed “The Bricks.”

The neighborhood, for decades a cornerstone of Houston’s black community, has gentrified in recent years. Texas Southern University, a historically black campus directly across the street from the projects, has long held itself out as launchpad for those willing to strive. But many residents struggle, with incomes about half the city average and unemployment nearly four times higher, even before the recent economic collapse.

Yeura Hall, who grew up next door to Floyd, said even in the Third Ward other kids looked down on those who lived in public housing. To deflect the teasing, he, Floyd and other boys made up a song about themselves: “I don’t want to grow up, I’m a Cuney Homes kid. They got so many rats and roaches I can play with.”

Larcenia Floyd invested her hopes in her son, who as a second-grader wrote that he dreamed of being a U.S. Supreme Court justice.

“She thought that he would be the one that would bring them out of poverty and struggle,” said Travis Cains, a longtime friend.

Floyd was a star tight end for the football team at Jack Yates High School, playing for the losing side in the 1992 state championship game at the Houston Astrodome.

He was an atypical football player. “We used to call him ‘Big Friendly,’” said Cervaanz Williams, a former teammate.

“If you said something to him, his head would drop,” said Maurice McGowan, his football coach. “He just wasn’t going to ball up and act like he wanted to fight you.”

On the basketball court, Floyd’s height and strength won attention from George Walker, a former assistant coach at the University of Houston hired for the head job at what is now South Florida State College. The school was a 17-hour drive away, in a small town, but high school administrators and Floyd’s mother urged him to go, Walker said.

“They wanted George to really get out of the neighborhood, to do something, be something,” Walker said.

In Avon Park, Florida, Floyd and a few other players from Houston stood out for their size, accents and city cool. They lived in the Jacaranda Hotel, a historic lodge used as a dormitory, and were known as the “Jac Boys.”

“He was always telling me about the Third Ward of Houston, how rough it was, but how much he loved it,” said Robert Caldwell, a friend and fellow student who frequently traveled with the basketball team. “He said people know how to grind, as hard as it is, people know how to love.”

After two years in Avon Park, Floyd spent a year at Texas A&M University in Kingsville before returning to Houston and his mother’s apartment to find jobs in construction and security.

Larcenia Floyd, known throughout the neighborhood as Ms. Cissy, welcomed her son’s friends from childhood, offering their apartment as refuge when their lives grew stressful. When a neighbor went to prison on drug charges, Ms. Cissy took in the woman’s pre-teen son, Cal Wayne, deputizing George to play older brother for the next 2½ years.

“We would steal his jerseys and put his jerseys on and run around the house, go outside, jerseys all the way down to our ankles because he was so big and we were little,” said Wayne, now a well-known rapper who credits Floyd with encouraging him to pursue music.

Floyd, too, dabbled in music, occasionally invited to rap with Robert Earl Davis Jr. -- better known as DJ Screw, whose mixtapes have since been recognized as influential in charting Houston’s place as a hotbed of hip-hop.

But then, the man known throughout Cuney as “Big Floyd,” started finding trouble.

Between 1997 and 2005, Floyd was arrested several times on drug and theft charges, spending months in jail. Around that time, Wayne’s mother, Sheila Masters, recalled running into Floyd in the street and learning he was homeless.

In August 2007, Floyd was arrested and charged with aggravated robbery with a deadly weapon. Investigators said he and five other men barged into a woman’s apartment, and Floyd pushed a pistol into her abdomen before searching for items to steal. Floyd pleaded guilty in 2009 and was sentenced to five years in prison. By the time he was paroled, in January 2013, he was nearing 40. 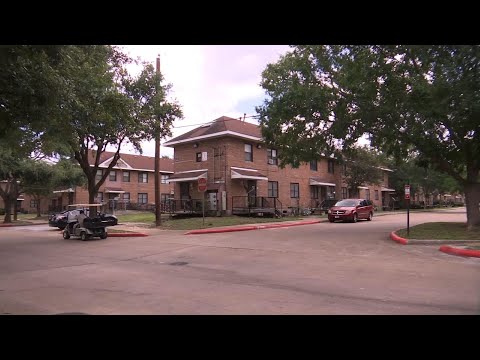 “He came home with his head on right,” said friend Travis Cains.

At a Christian rap concert in the Third Ward, Floyd met Lillard and pastor Patrick “PT” Ngwolo, whose ministry was looking for ways to reach residents in Cuney Homes. Floyd, who seemed to know everyone in the project, volunteered to be their guide.

Soon Floyd was setting up a washtub on the Cuney basketball courts for baptisms by Ngwolo’s newly formed Resurrection Houston congregation. He joined three-on-three basketball tournaments and barbecues, organized by the ministry. He knocked on doors with Ngwolo, introducing residents as candidates for grocery deliveries or Bible study.

Another pastor, Christopher Johnson, recalled Floyd stopping by his office while Johnson’s mother was visiting. Decades had passed since Johnson’s mother had been a teacher at Floyd’s high school. It didn’t matter. He wrapped her in a bear hug.

“I don’t think he ever thought of himself as being big,” Johnson said. “There’s a lot of big dudes here, but he was a gentleman and a diplomat and I’m not putting any sauce on it.”

On the streets of Cuney, Floyd was increasingly embraced as an O.G. -- literally “original gangster,” but bestowed as a title of respect for a mentor who’d learned from life experience.

In Tiffany Cofield’s classroom at a neighborhood charter school, some of her male students -- many of whom had already had brushes with the law -- told her to talk to “Big Floyd” if she wanted to understand.

Floyd would listen patiently as she voiced her frustrations with students’ bad behavior, she said. And he would try to explain the life of a young man in the projects.

After school, Floyd often met up with her students outside a corner store.

“How’s school going?” he’d ask. “Are you being respectful? How’s your mom? How’s your grandma?”

In 2014, Floyd began exploring the possibility of leaving the neighborhood.

As the father of five children from several relationships, he had bills to pay. And despite his stature in Cuney, everyday life could be trying. More than once, Floyd ended up in handcuffs when police came through the projects and detained a large number of men, Cofield said.

“He would show by example: ‘Yes, officer. No, officer.’ Very respectful. Very calm tone,” she said.

A friend of Floyd’s had already moved to the Twin Cities as part of a church discipleship program that offered men a route to self-sufficiency by changing their environment and helping them find jobs.

“He was looking to start over fresh, a new beginning,” said Christopher Harris, who preceded Floyd to Minneapolis. Friends provided Floyd with money and clothing to ease the transition.

In Minneapolis, Floyd found a job as a security guard at the Salvation Army’s Harbor Light Center -- the city’s largest homeless shelter.

“He would regularly walk a couple of female co-workers out ... at night and make sure they got to their cars safely and securely,” said Brian Molohon, director of development for the Army’s Minnesota office. “Just a big strong guy, but with a very tender side.”

Floyd left after a little over a year, training to drive trucks while working as a bouncer at a club called Conga Latin Bistro.

“He would dance badly to make people laugh,” said the owner, Jovanni Thunstrom. “I tried to teach him how to dance because he loved Latin music, but I couldn’t because he was too tall for me.”

Floyd kept his connection to Houston, regularly returning to Cuney.

When Houston hosted the Super Bowl in 2017, Floyd was back in town, hosting a party at the church with music and free AIDS testing. He came back again for his mother’s funeral the next year. And when Cains spoke with him last, a few weeks ago, Floyd was planning another trip for this summer.

By then, Floyd was out of work. Early this spring, Thunstrom cut Floyd’s job when the COVID-19 pandemic forced the club to close.

On the evening of Memorial Day, Floyd was with two others when convenience store employees accused him of paying for cigarettes with a counterfeit $20 bill, then called the police. Less than an hour later, Floyd breathed his last.

Those who knew him search for meaning in his death.

“I’ve come to the belief that he was chosen,” said Cofield, the teacher. “Only this could have happened to him because of who he was and the amount of love that he had for people, people had for him.”

It’s a small comfort, she admits. But, then, in Big Floyd’s neighborhood, people have long made do with less.

Merchant and Lozano reported from Houston, Henao from Hershey, Pennsylvania, and Geller from New York. Associated Press writer Aaron Morrison in Minneapolis and videographer John Mone in Houston contributed to this report.